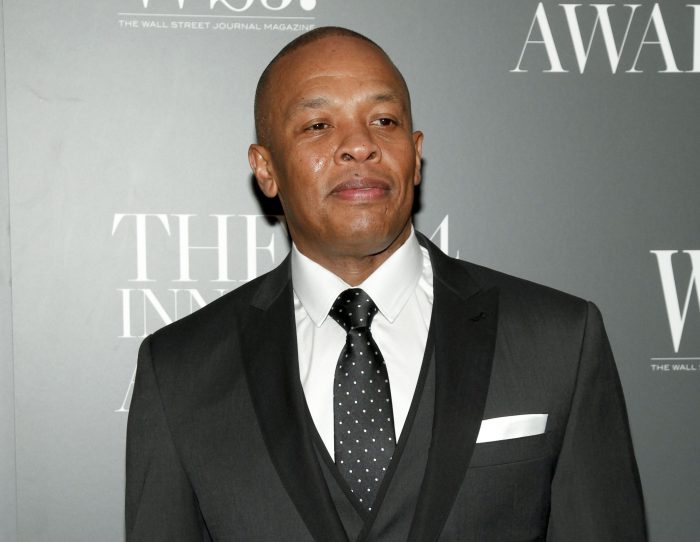 In 1988, one of Black America’s most influential hip-hop groups, N.W.A. let the world know that they were “Straight Outta Compton.” Over the years, N.W.A. member Andre Young, AKA Dr. Dre, never forgot where he came from and has made continued efforts to give back to his city. Last week, the rapper announced a 10 million dollar donation toward a performing arts center for Compton High School.

“My goal is to provide kids with the kind of tools and learning they deserve,” Dre said in a statement. “The performing arts center will be a place for young people to be creative in a way that will help further their education and positively define their future.”

Compton Unified School District board president Satra Zurita expressed her thoughts on the building of the performing arts center.

“We are excited because we are going to be home to one of the greatest performing arts centers in the country,” she said. “We were building a new high school but [Dr. Dre’s] participation in the project brings some really big names to the project. Frank Gehry, a world renowned architect is going to design it based on relationships with Dre.”

The center will have approximately 1,200 seats, state of the art technology, and small studio rooms for producing, instruments, and photography.

“Every single high school in our district for years has wanted a recording studio at their high school,” said Compton Unified School District superintendent Darin Brawley. “This is going to provide the opportunity to bring that to fruition. We envision implementing a digital broadcasting center that would enable students to continue interest in media. We have a unique opportunity to provide a well-rounded experience for students in the arts through the performing arts center as well as to the community.” 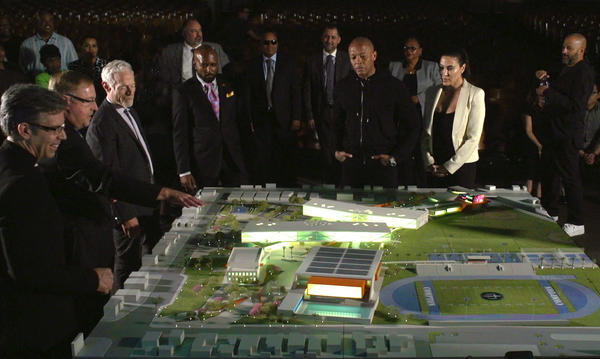 Dr. Dre, center, with hands in pockets, views a model of the performing arts complex he is helping to fund as part of the new Compton High School. (Courtesy of Compton Unified School District)

Compton Unified School District envisions a joint use agreement with the city that will allow members of the community to have access to the center outside of school hours.

“We already had funding but this will give us the opportunity to have additional resources meaning money, as well as talent, and community partnerships and a gateway to Hollywood for students who want to be in the performing arts industry. Whether that’s behind the scenes, or in front of the scenes,” said Zurita.

The estimated completed project date is four and a half years.

“I am an alumna of Compton High and we are just overjoyed,” said Zurita. “Compton High is over 100-years-old. It’s the rule that our kids always perform exceptionally but when they are in a bright and fresh new space, with up-to-date technology, this is going to open up the possibility for our students to learn in a 21st century environment.”

Aside from Dr. Dre’s pledge to donate 10 million dollars, he has also committed to reach out to other people in the industry to raise money.

“This ambitious project is going to be a beacon for transformational change in Compton,” said Zurita. “It is going to give our students and the entire community access to opportunity and achievement. What our goal is to not only close the achievement gap but to close the opportunity gap as well and provide life changing and life enhancing experiences to our students.”