An ethical philosopher, author, holder of two PhDs, and professor and chair of the Department of Africana Studies at California State University, Long Beach, Maulana Karenga

In the midst of the pandemic of Covid 19 and the continuing pathology of oppression, there has emerged an epidemic of racist reactions to the truth of the real founding and functioning of the United States of America. Signs of it appeared in reaction to Nikole Hannah-Jones’ 1619 Project, recentering U.S. history from 1776 and the independence of Whites to 1619 and the enslavement of Black people. But it has taken a more vicious, vile and destructive role in the miscasting and misusing of critical race theory. These racist reactions are diagnosed and engaged here as an epidemic to indicate its diseased, rapid spreading, and widespread character. Indeed, these racist reactions are symptomatic of the system’s underlying pathology of racism which by any truthful and honest assessment is clearly a human psychological and social disorder.

Thus, in no way should we assume this latest outburst and outbreak of racist reaction under the banner of anti-critical race theory is new, isolated or unique. On the contrary, it is rooted in the system and the widely held fundamental beliefs, thoughts, fears and fantasies of its guardians and beneficiaries – White folks. In at least 20 states Republications have passed legislation to ban reading and teaching what they call “critical race theory” without knowing or bothering to explain what it really is. And school boards, hyped into hysteria-like emotions and anger, have followed suit. Indeed, there has been talk of not only banning, but also burning books on race and other troubling subjects that are deemed and condemned as causing discomfort, shame and guilt in White folks and division in the country.

Surely, there was and is no expressed concern about the discomfort, shaming, racial division, degradation and destruction imposed on Blacks and similar others vulnerable by White folks historically and currently. At the very founding of the country, White people had an opportunity to actually build a new kind of country united in freedom, justice and equality. But they, themselves, decided to divide the country into those worthy and unworthy, dominant and dominated, free and enslaved. Also, they enshrined it in constitutional and general law. So, they shouldn’t blame their history on us. It is a history they made with all its continuing radical evil and they must be held accountable for it. And it is through righteous and relentless struggle that we hold them accountable and dare achieve a country worthy of the name, free, just and democratic.

These people don’t want to be told the truth, reminded of the horror and hell of the Holocaust of enslavement, the savagery of segregation, and the continuing killing of Black people, especially Black men, under the color and camouflage of law. They want us to forget it, accept their self-congratulatory narratives as history, curriculum and reality. And they want us to forgive them without their conceding the crime; to reconcile with them without their naming the reason we would need to do it in the first place; and without the accountability of truth and social correctives needed before we can overcome the unfreedom, injustice and inequalities the founding fathers put in place as a constitutional order of White supremacy.

Whatever incomplete, distorted or woefully unaware conception White folks have when they mention critical race theory, they are not speaking simply of some new cherished hatred or hostility. On the contrary, you can count on it, figuratively bet your life on it and you can pretend a capacity of prophecy by it. For you, I and even White folks in their saner and more sociable moments, know it’s about Blackness, Black people and any and all things associated with them.

This is not to deny that it also is a problem with other people of color and vulnerable groups, but given the bottom place Blackness has on the scale of Whites’ racial hierarchy and the assertiveness of Black people in the history of resistance, Black is at the center of it all. So, it turns out that in spite of the country’s (read White peoples) pious announcement of a new and long needed racial reckoning, it was more pronouncement than practice. It was for them an opportunity to manipulate race instead of erasing racism. And they do this, not simply to win votes and offices, but to win hearts and minds for racial and racist struggles they wage on every level. Moreover, they do it as an expression and performance of their own racial commitment and will to dominate.

Dr. Derrick Bell, considered a, if not the, founding theorist of critical race theory, talked of critical race theory as a realistic way of African Americans understanding and engaging the racist reality of America which would “free them to think and plan within a context of reality rather than idealism.” Dr. Kimberlé Williams Crenshaw, a law professor at UCLA and Columbia, and one of the key theorists of CRT stated that “It is a way of seeing, attending to, accounting for, tracing and analyzing the ways that race is produced, the ways that racial inequality is facilitated, and the ways that our history has created these inequalities that now can be almost effortlessly reproduced unless we attend to the existence of these inequalities.”

After all the misinformation and disinformation concerning critical race theory, it is important to know how Dr. Bell formulated its fundamental tenets. They are: (1) racism in America is normal, not abnormal; (2) it is not simply individual, but systemic; (3) law is one of the key elements in its construction and maintenance; (4) race is a social construction and is embedded in the legal system; (5) Whiteness is legalized as property and yields both power and privilege; (6) the importance of developing counter narratives to the false and confusing dominant narrative of the country; and (7) the need for constant resistance and struggle to eliminate racism and all forms of oppression.

Beyond the ignorance, insecurities and violence that seek to hold back the march of history and humanity forward, one can see the usefulness of critical race theory. For simply defined, it is a way of analyzing and understanding systemic racism and its role in the founding and functioning of U.S. society, especially from the vantage point of law. Beginning as a law school conversation among scholars, like Derrick Bell, Kimberlé Crenshaw, Richard Delgado, Mari Matsuda, Patricia Williams and others, it has indeed become, in spite of willful distortions, a valuable tool of both analysis and struggle.

Professor Bell cites Nana Martin Luther King’s essay, “Testament of Hope” which King wrote of setbacks, sorrows, suffering and the perverse character of his adversaries. King stated that his adversaries expected him to become hard, grim and desperate. But King said, “They fail, however, to perceive the sense of affirmation generated by the challenge of embracing struggle and surmounting obstacles.” In King’s words and work Bell contends, “There was a deep message of commitment to courageous struggle whatever the circumstances or odds.” Here, as elsewhere, Bell advocates a realism that at times invites pessimism. But in the end, he continues to call us to courageous struggle against the radical evil of racism.

Urging us to resist and continue the struggle, regardless, Nana Derrick Bell tells us that the struggle for freedom is an expression of our humanity which is expanded in and through this struggle. Thus, he says, “Resistance must be grounded in struggle; thus, the realization of our (enslaved) forbears, that the struggle for freedom is, at the bottom, a manifestation of our humanity that survives and grows stronger through resistance to oppression, even if that oppression is never overcome.” But, of course, we will overcome and already have overcome obstacles few believed we could. For as our honored ancestors, our models and mirrors in countless ways, taught us in word and deed, we are indeed, those who “ride the storm and remain intact;” those who “conduct (their) blooming in the noise and whip of the whirlwind;” and those who “specialize in the wholly impossible.” 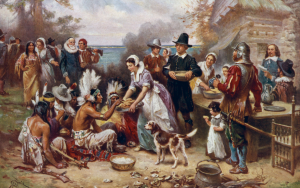 Thanksgiving, a Day to Celebrate or to Mourn? #BlackXmas: Visioning Beyond the Weight of the Moment

The Ahmaud Arbery Verdict and Victory:
Enough is Enough.

Kwanzaa’s Meaning in the Midst of Pandemic: