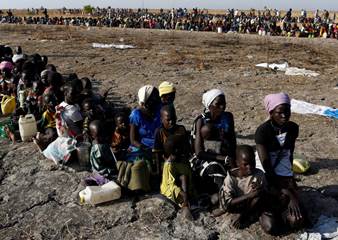 (GIN) – At a question and answer session at Rome’s All Saints Anglican Church, Pope Francis revealed that his staff is “studying the possibility” of a visit to embattled South Sudan.

He said the reason was that the Anglican, Presbyterian, and Catholic bishops of South Sudan had come to ask him: “Please, come to South Sudan, even for a day, but don’t come alone, come with Justin Welby”, the Anglican Archbishop of Canterbury.

Welby is spiritual head of the worldwide Anglican communion, which counts about 85 million members and is the world’s third-largest Christian denomination.

“We are looking at whether it is possible, the Pope said, “or if the situation down there is too dangerous. But we have to do it, because they – the three [Christian communities] – together desire peace, and they are working together for peace.”

So far, more than 31,000 South Sudanese refugees – mostly women and children – have crossed the border into Sudan this year, fleeing famine and conflict, the United Nations refugee agency said on Monday.

The United Nations declared famine last week in parts of South Sudan’s Unity State, with about 5.5 million people expected to have no reliable source of food by July.

“Initial expectations were that 60,000 refugees may arrive through 2017, but in the first two months alone, over 31,000 refugees arrived,” a statement from the office of the United Nations High Commissioner for Refugees (UNHCR) in Khartoum said.

Some 328,339 South Sudanese refugees have sought refuge in Sudan, including about 131,000 in 2016, many exhausted, malnourished and ill, having walked for days.

The United Nations needs $4.4 billion by the end of March to prevent catastrophic hunger and famine in South Sudan, Nigeria, Somalia and Yemen, yet just $90 million has been collected so far, U.N. Secretary-General Antonio Guterres said last week.

With over 20 million people at risk of starvation over the next six months and famine already declared in parts of South Sudan, “we are facing a tragedy,” Guterres said. “We must avoid it becoming a catastrophe.” w/pix of South Sudanese asylum seekers