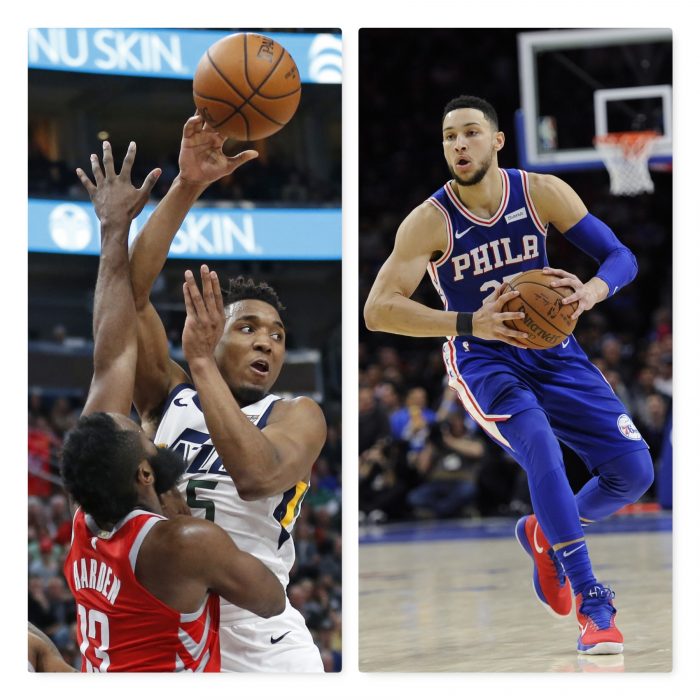 The Philadelphia 76ers’ Ben Simmons and the Utah Jazz’s Donovan Mitchell today were named the Kia NBA Eastern and Western Conference Rookies of the Month, respectively, for games played in February.
Simmons won the Kia NBA Eastern Conference Rookie of the Month award for the second consecutive month and the third time this season. In February, he led East rookies in scoring (16.0 ppg) and rebounding (7.3 rpg) and paced all first-year NBA players in assists (7.7 apg). He also tied for the rookie lead in steals (2.00 spg) and ranked third among that group in field goal percentage (55.0). The 6-10 guard/forward from Australia helped the 76ers to an 8-3 record for the month, the second-best mark in the East.
On Feb. 14, Simmons had a triple-double of 18 points, 12 rebounds and 10 assists as the 76ers rallied from a 24-point third-quarter deficit to defeat the Miami Heat 104-102 in Philadelphia. In his first game after the All-Star break, Simmons scored a career-high 32 points, made the go-ahead free throw with 5.6 seconds left and added 11 assists and seven rebounds in a 116-115 road win against the Chicago Bulls on Feb. 22.
Mitchell earned the Kia NBA Western Conference Rookie of the Month award for the third month in a row. In February, he averaged a rookie-high 21.4 points to go with 4.2 rebounds, 3.8 assists and 1.30 steals in 10 games as Utah went 8-2 with him in the lineup and 9-2 overall. He topped all first-year NBA players with 29 three-pointers made and led West rookies with 29 free throws made.
The 6-3 guard opened the month by scoring 40 points on 14-of-19 shooting from the field (including 7-of-9 from three-point range) in a 129-97 road win over the Phoenix Suns on Feb. 2. With that performance, Mitchell became the first player in Jazz history with multiple 40-point games in his rookie season. He scored at least 24 points in each of his final four games before the All-Star break – all Utah victories.
Here are additional highlights for Simmons and Mitchell in February:
Ben Simmons, Philadelphia 76ers
Feb. 2 vs. Miami: Recorded 20 points, six rebounds and five assists in a 103-97 win over the Heat.
Feb. 6 vs. Washington: Shot 6-of-8 from the field and posted 15 points, eight assists, six rebounds and three steals in a 115-102 victory against the Wizards.
Feb. 12 vs. New York: Contributed 13 points, six rebounds, six assists, four steals and three blocks in a 108-92 victory over the Knicks.
Donovan Mitchell, Utah Jazz
Feb. 11 @ Portland: Scored 27 points and grabbed six rebounds in a 115-96 win over the Trail Blazers.
Feb. 12 vs. San Antonio: Finished with 25 points, seven rebounds, five assists and three steals in a 101-99 victory over the Spurs.
Feb. 24 vs. Dallas: Made four three-pointers en route to 25 points and added six rebounds and five assists in a 97-90 win against the Mavericks.
Other nominees for the Kia NBA Eastern and Western Conference Rookies of the Month were Atlanta’s John Collins, Boston’s Jayson Tatum, Brooklyn’s Jarrett Allen, Chicago’s Lauri Markkanen, Dallas’ Dennis Smith Jr., the Los Angeles Lakers’ Josh Hart and Kyle Kuzma, Miami’s Bam Adebayo, Phoenix’s Josh Jackson and Sacramento’s Bogdan Bogdanovic and De’Aaron Fox.
ADVERTISEMENT
ADVERTISEMENT
Categories: Basketball | Sports
Tags: #Rookie | Basketball | Ben Simmons | Donovan Mitchell | NBA | philadelphia 76ers | Rookie of the Month | Utah Jazz