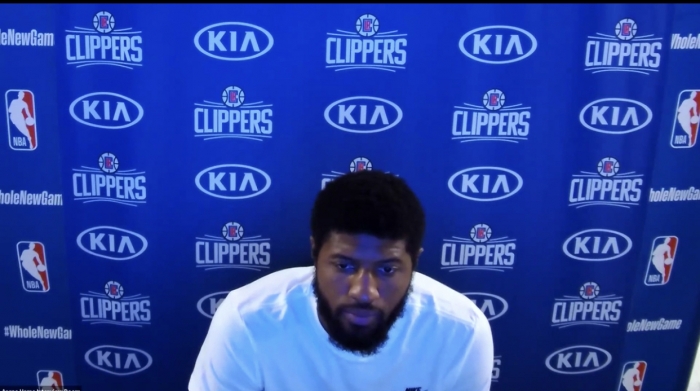 The Clippers star Paul George, dedicated his press conference to shed light on the world, the immediate need for social change. After the scrimmage, George repeatedly shut down any basketball-related questions. “I have no answers for Orlando,” he tells reporters.

George took some time to send his condolences to the family of Breonna Taylor. “Breonna Taylor, Rest in Peace, George Floyd, Rest in Peace. There are so many others that have been brutally murdered by the hands of the police. That’s all I got, that’s my message, and that will continue to be my answer,” George stated to the reporters.

It’s been talks circulating during these difficult times dealing with social injustices, about the NBA coming back. Questions were raised, would it be a distraction, are the players going to return, is the world going to stop protesting and stop raising awareness on police brutality. 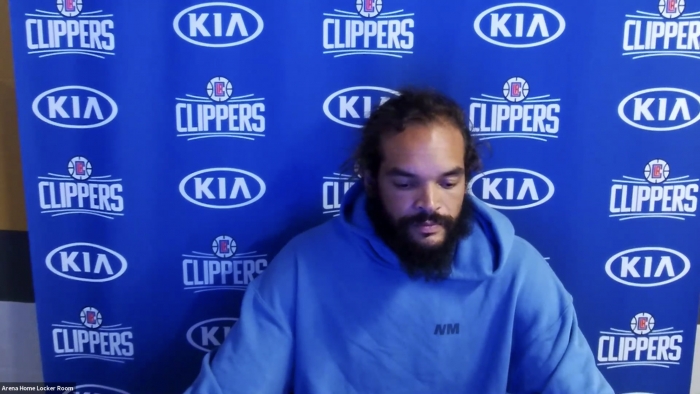 George wants to use this opportunity of playing the game he loves, to constantly speak on the murderers that are still free. “That’s what we’re here for. To continue that in the back of people’s mind. Murderers are still free. Nothing was done yet and we’re going to continue to, again, keep this fight going and use our platform to stand up for those who can’t stand anymore.”

Players around in the Orlando bubble are all striving to make a difference. They are taking this time to band together, have those conversations with one another to bring justice. “We’re housed in the same areas. It’s very easy for us to come together, and do this collectively. The NBA is a wonderful platform, and they allowed us to come together and use it,” George expresses.

When asked by reporters, is social justice the topic of conversation when players see each other, the ten year veteran said, “Absolutely, absolutely. Because this league is predominantly African American, and people in these situations that are losing their lives are predominantly  African American. It just comes naturally.” 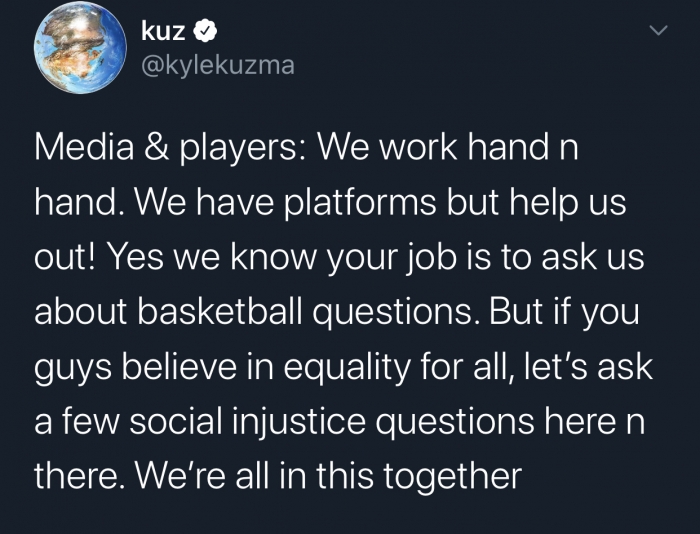 Clippers center Joakim Noah, used his press conference to let everyone know that basketball is only entertainment. “I think it’s important to know what’s going on, we’re in a bubble right now. It’s a lot of people fighting for justice, that’s the truth.”

Noah carried on, “Keeping the message on Breonna Taylor is really important, keeping the message on what really matters making sure the message isn’t drowned through basketball. Basketball is entertainment, but we’re here dealing with a lot of bigger things, in terms of the message and the work we have to do. It’s about putting work in the community.”

Players are affected by the injustices going on in the world. They would like to use this time in the bubble to answer questions regarding social justice.

Lakers forward Kyle Kuzma spoke out on Twitter recently. “Media & players. We work hand in hand. Yes we know your job is to ask us about basketball questions. But if you guys believe in equality for all, let’s ask a few injustice questions here and there. We’re all in this together.”