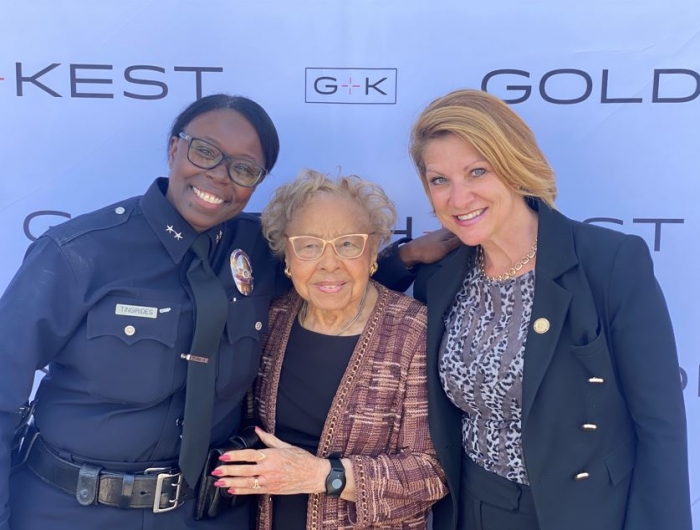 The woman who coined the term, “To Protect and Serve” that appears on police vehicles throughout Southern California and beyond and is the subject of a new biography, was feted at a book signing on May 11 at the Museum Tower in downtown Los Angeles.

Ozie Bell Gonzaque, 96, along with the author of her biography Stanley O. Williford, a former LA Times reporter, signed copies of “To Protect and Serve: The Volunteer World of Ozie Bell Gonzaque.”

In addition to coining the “To Protect and Serve” motto, Mrs. Gonzaque, who has been a resident of Watts for nearly 80 years, was a key figure in easing tensions between the community and law enforcement around the time of the Watts Riots of 1965.

One of her first actions was arranging a meeting with then-LAPD Chief William H. Parker, who had an abysmal relationship with the African American community. Mrs. Gonzaque was determined to improve relations by putting her personal feelings aside and encouraging Parker to “change the tone” at the LAPD.

She maintained an unlikely friendship with Parker and developed relationships with other key leaders to begin mending fences with the African American community.  While many were distrustful of Mrs. Gonzaque and resented her outreach to the establishment, others commended her for her bravery and devotion to her community.  Her long-held relationship with the LAPD remains active to this day.

The book delves into other areas of her life and experiences in California during key moments in history.

The event was sponsored by Goldrich Kest, owner of Museum Tower, which recently completed a multi-million dollar renovation.  Recognized as one of the nation’s most successful real estate companies, Goldrich Kest is a privately owned, family-run business that can trace its origins back more than 60 years to two entrepreneurs, Jona Goldrich and Sol Kest, holocaust survivors who parlayed their meager savings into an empire.

Among them are 124 apartment buildings with 14,004 units, 5 marinas, 22 senior living facilities with 4,168 beds, and, scattered throughout the US, more than 6.8 million square feet of commercial, industrial and retail space. Over half of its apartment buildings accommodate low-income families.