A Fullerton man has pleaded no contest to stalking singer Rihanna when he broke into her Hollywood Hills home last year, the Los Angeles County District Attorney’s Office announced today.

Eduardo Leon (dob 8/30/91) entered his plea late yesterday to one felony count each of stalking and vandalism and a misdemeanor count of resisting arrest. He was immediately sentenced to formal probation for five years and placed on GPS monitoring for 90 days.

Leon, who also must participate in a dual diagnosis program for mental health and drug treatment, was ordered to stay away from the singer for 10 years and cannot use social media while he is on probation. If he violates the terms of his probation, he could face up to four years and eight months in state prison.

On May 9, 2018, Leon hopped a fence and entered a house owned by Rihanna, who was not home at the time. He spent about 12 hours inside the home and was arrested the next day after being discovered by the singer’s assistant.

Case BA468036 was investigated by the Los Angeles Police Department. 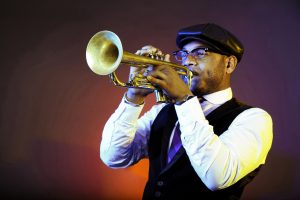 Etienne Charles Carnival: The Sound of a People
Stop (At Union Station) In The Name Of Love: Metro Art Presents A Night Of ...