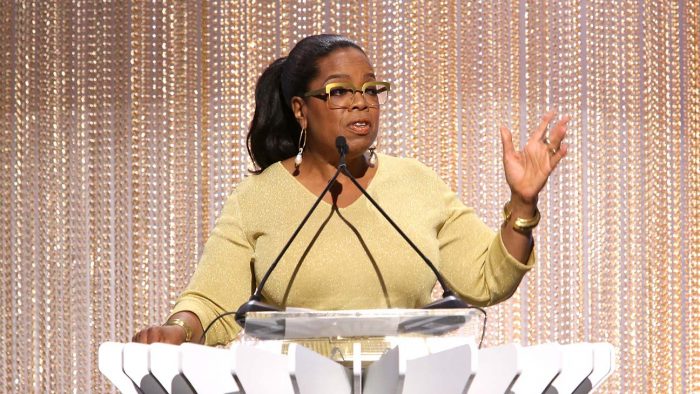 LOS ANGELES (AP) — Oprah Winfrey may have been the main honoree at The Hollywood Reporter’s inaugural Empowerment in Entertainment luncheon, but it was a group of underprivileged high school students who stole the show and even brought Winfrey to tears.

At the event Tuesday in Los Angeles, 20 local high school juniors who had been selected to the new Young Executive Fellowship Program, learned from Selena Gomez that two would be were receiving full scholarships to Howard University and Emerson College, and all would get a laptop. The program was started to try to address the lack of diversity and inclusion in the executive ranks in Hollywood.

The joyful faces on stage brought the well-heeled room — including Lea Michele, Caitlyn Jenner and Maria Shriver — to their feet with applause. Winfrey wiped away tears under her glasses looking up at all the grateful students.

Alicia Keys, on hand to introduce Winfrey as the recipient of the first Empowerment in Entertainment award, took the stage right after.

“Ok that was just a real moment right there,” Keys said. “That was a real thing that happened right here.”

By the time Oprah made her way to the stage to accept the award, henceforth to be called the Oprah Winfrey Empowerment in Entertainment Award, her eyes were dry and she was ready to rock the room with an inspiring speech in which she looked back at her own history of fighting for equal pay for herself and then others.

She recounted asking in Baltimore to be paid the same as her male co-anchor.

“I was told by my news director and the general manager that because I was a single woman who didn’t have a mortgage and didn’t have kids, I wasn’t entitled to earn as much as the man sitting next to me,” Winfrey said. “They didn’t know my value but I knew my value.”

And by the time she did get a raise in Chicago, she asked for the same for her producers. “They’re just girls,” she was told. And said she was willing to sit down until they got one.

“It takes a while to develop a voice but once you have it you better use it,” Winfrey said.

She laughed that she did not need another award, but said she relented when she learned that it was in support of the young executives. Winfrey told the students that their trajectory was about to change because now they’d have access.

“Let’s leave here today with the collective memory of wanting to create enlightenment in the world,” Winfrey said.

Kumail Nanjiai kicked thinks off on a funny, but heartfelt note.

He urged more representation in front of the camera and behind on television and in film, where he joked that, “Everyone named Chris has all the power. This is about sharing the power with people who have less bankable names.”

Nanjiani also noted how diversity is good for business, but that empowerment will really be achieved when “a movie made by a non-white person can flop.”

“I’m looking forward for everyone having the luxury to fail,” Nanjiani said.

“We are tired of having this conversation about diversity and inclusion and empowerment,” Lemon said. “It is 2019 y’all.”

THR publisher Lynne Segall dedicated the luncheon to director John Singleton , who passed away Monday at the age of 51, who she said embodied everything the event was trying to do. 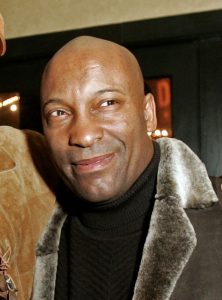