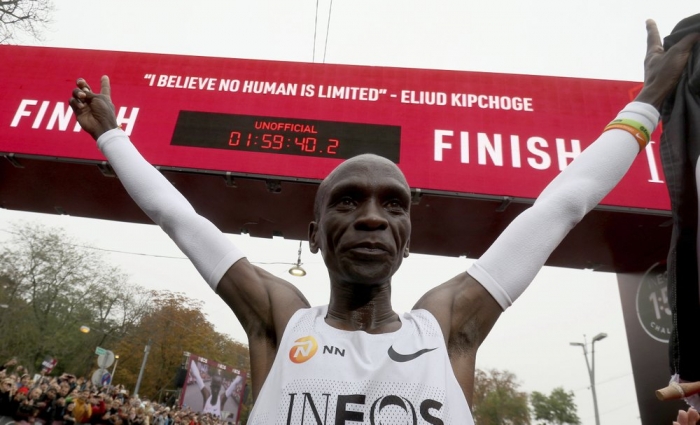 Marathon runner Eliud Kipchoge from Kenya celebrates under the clock after crossing the finish line of the INEOS 1:59 Challenge after 1:59:40 in Vienna, Austria, Saturday, Oct. 12, 2019. He is the first human ever to run a marathon under two hours. (AP Photo/Ronald Zak)

Like the sub-four minute mile, running a marathon in less than two hours had seemed impossible — until Saturday. But this time there’s an asterisk: Olympic champion Kipchoge performed his feat under conditions so tightly controlled to maximize his success that it won’t appear in the record books.

Ahead of the event, Kipchoge even compared the feat to being “like the first man on the moon.” Afterward, he drew comparisons to Bannister, the late Briton who 65 years ago became the first athlete to run a mile in under four minutes. 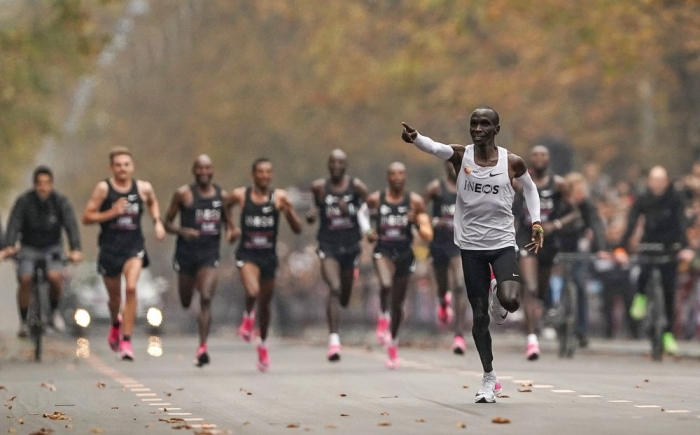 Eliud Kipchoge runs on his way to break the historic two hour barrier for a marathon in Vienna, Saturday, Oct. 12, 2019. (Jed Leicester/The INEOS 1:59 Challenge via AP)

With all variables tailored to his advantage, it was still the full marathon distance but it was no regular marathon race, which means his jaw-dropping finishing time will not be ratified by IAAF.

Different to an ordinary race, event organizers had set a nine-day window to be flexible and stage the run in the best possible weather conditions.

Also, Kipchoge was supported throughout his run by 36 pacemakers who accompanied him in alternating groups, with five athletes running ahead of him in a V-shape and two others closely following.

Unlike a normal race, a timing car just in front of the pack also helped keep the scheduled pace, and was equipped with a laser beam, projecting the ideal position on the road, parts of which also had painted stripes to indicate the optimum running line. 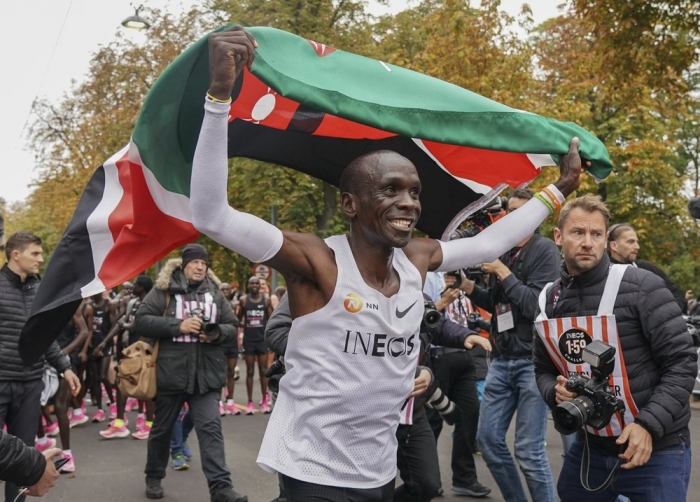 Furthermore, Kipchoge received drinks handed over by a cyclist to prevent him from having to slow down.

Even though his attempt was never meant to set an official world record, Kipchoge was understandably delighted and twice punched his chest in celebration while smiling when he finished.

“That was the best moment of my life,” he said, before adding that he trained 4 ½ months for his extraordinary race against the clock. “The pressure was very big on my shoulders. I got a phone call from the president of Kenya.”

In a statement, President Uhuru Kenyatta said: “Hearty congratulations, Eliud Kipchoge. You’ve done it, you’ve made history and made Kenya proud. Your win today will inspire future generations to dream big and aspire to greatness.” 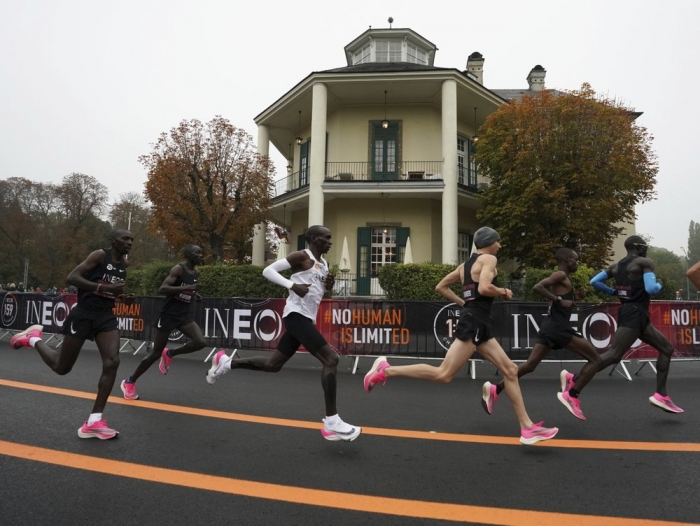 “We can make this world a beautiful world and a peaceful world,” he said. “The positivity of sport. I want to make it a clean sport and an interesting sport.”

Kipchoge was cheered by thousands along the course in Prater Park and there were celebrations in his home country before he had even finished.

Hundreds of joyous Kenyans brought traffic to a standstill in the middle of the capital, Nairobi, as they gathered to watch the end of the run on a large screen. People pumped their fists, clapped and fell to their knees as Kipchoge cruised to the finish line.

In Kenya’s running mecca of Eldoret, called the home of champions, hundreds of people burst on to the streets in celebration.

“We should line up the entire road from the airport to Nairobi. Receive him like the hero he is,” prominent activist Boniface Mwangi said on Twitter.

Running at an average pace of 2 minutes, 50 seconds per kilometer (around 4:33 per mile), Kipchoge was 11 seconds ahead of schedule halfway through his run. He then maintained his tempo until the pacemakers left him for the final 500 meters, where he sped up. 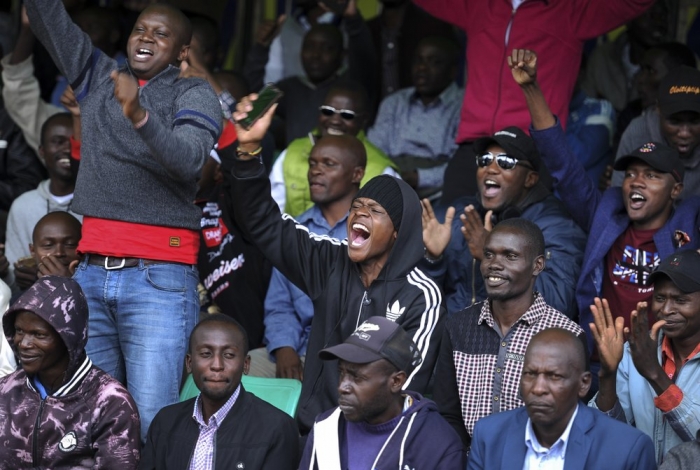 Kenyans celebrate Eliud Kipchoge’s sub-2 hour marathon time, outside the Kenya International Conference Center in downtown Nairobi, Kenya Saturday, Oct. 12, 2019. Eliud Kipchoge has become the first athlete to run a marathon in less than two hours, at an event set up for the attempt in Austria, although it will not count as a world record. (AP Photo/John Muchucha)

“I was really calm, I was just trying to maintain the pace,” said Kipchoge, adding he was never in doubt about breaking the barrier. “For me it was not 50-50, it was 90%.”

Jim Ratcliffe, founder of the chemicals company backing the attempt, exchanged high-fives with Kipchoge after the finish.

“He even accelerated in the final kilometer, he is a superhuman,” Ratcliffe said. “I can’t believe he’s done it. He did the first half in less than an hour and then he’s just done that again.”

Organizers said normal anti-doping regulations were in place and that Kipchoge and all the pacemakers were being tested in and out of competition by the Athletics Integrity Unit (AIU).

The team behind the event “has ensured all athletes involved in the project are undergoing extensive intelligence-led testing that has been pioneered by the partnership between Abbott World Marathon Majors and the AIU,” they said in a statement to The Associated Press.

The Prater Park in the Austrian capital offered long straights, protected from the wind by high trees, for most of the 9.6-kilometer course, which Kipchoge completed more than 4 times. 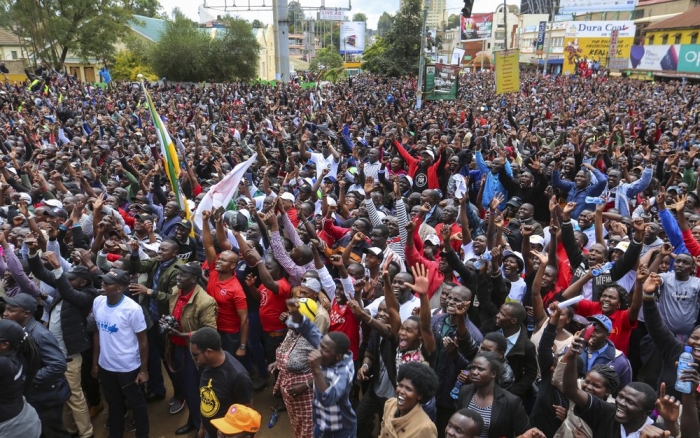 Thousands of Kenyans come out into the streets to celebrate Eliud Kipchoge’s sub-2 hour marathon time, in the Rift Valley town of Eldoret where he lives and trains, in Kenya Saturday, Oct. 12, 2019. Eliud Kipchoge sent shockwaves through the world of sport by becoming the first athlete to break the two-hour barrier for a marathon, at an event set up for the attempt in Austria, although it will not count as a world record. (AP Photo)

It was his second attempt at breaking the two-hour barrier, after missing out by 26 seconds at a similar event on the Formula One track in Monza, Italy, in May 2017.

Kipchoge, who took Olympic gold in Rio de Janeiro in 2016 and has won 10 of his 11 marathons, holds the official world record of 2:01:39 since shattering the previous best mark by 78 seconds in Berlin last year.

In the near-perfect circumstances at the meticulously planned attempt, Kipchoge shaved almost two minutes off that time.

“I am happy for him and what he has achieved. He has inspired all of us that we can stretch our limits and that we can do more than we think we can do,” Sang added.

Under Sang’s guidance, Kipchoge won gold in the 5,000 meters at the world championship in 2003, the start of a distinguished track career which includes Olympic bronze and silver medals from 2004 and 2008.

After missing out on qualification for the 2012 London Olympics on the track, Kipchoge switched to the marathon and has since been pushing the boundaries of the discipline. But he still faces one big challenge — to run under two hours in a regular marathon race.