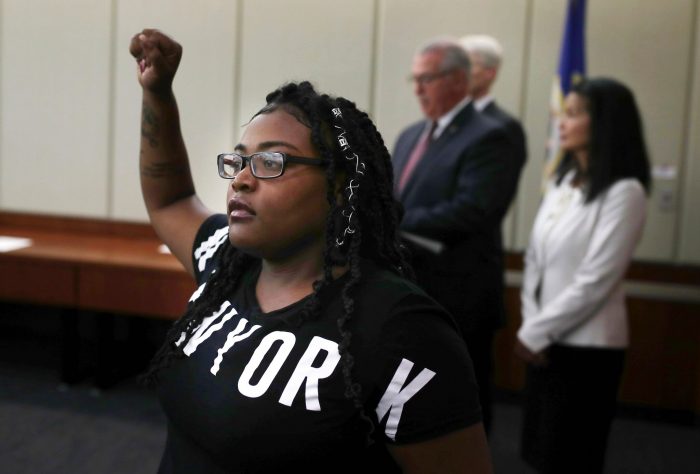 Two Minneapolis police officers who shot and killed a black man last month were justified in using deadly force, a prosecutor announced Monday, saying the man was fleeing police and turned toward them with a loaded gun before he was shot.

Hennepin County Attorney Mike Freeman said Thurman Blevins had refused commands to stop and show his hands, and was clearly a danger to the officers and community.

“Their decision to use deadly force against Mr. Blevins under those circumstances was authorized,” Freeman said, adding that the officers will not be criminally charged.

His statements were in prepared remarks that were handed out to the media. Freeman had tried to make the announcement during a news conference, but he was shouted down by Blevins’ friends and family members. They argue Blevins was no threat to anybody and was just sitting with a woman and his child.

“He was forced to run away from his family so they wouldn’t shoot him down in his own community in front of his kid,” said Sydnee Brown, a cousin.

Freeman’s decision came after the city released the officers’ body-camera video late Sunday. Freeman’s report says Officers Justin Schmidt and Ryan Kelly were responding to a 911 call of a man firing a gun into the air June 23 on the city’s north side. Body camera videos show them pulling their cruiser up and Blevins seated on a curb near a woman with a child in a stroller. As the officers pull up, one says, “He’s got a gun!” and they jump from the squad car. 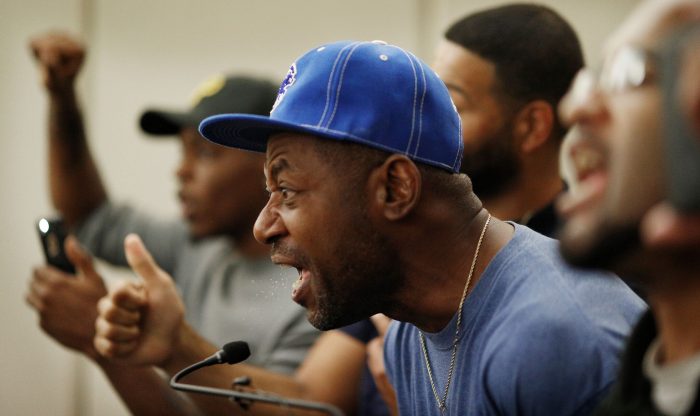 John Thompson, center, and other protesters interrupt Hennepin County attorney Mike Freeman who was speaking about body camera footage that was released Sunday in the Thurman Blevins case, during a news conference at Hennepin County Government Center, Monday, July 30, 2018, in Minneapolis. (Jerry Holt/Star Tribune via AP)

Schmidt yells “Put your (expletive) hands up now!” as Blevins runs. Schmidt also yells, “Put your hands up! I will (expletive) shoot you!” Kelly yells, “Stop or I’ll shoot!” repeatedly.

In a chase that takes less than a minute, Blevins yells back, “I didn’t do nothing bro,” ”Please don’t shoot” and “Leave me alone.” An enhanced version of the videos has a red circle drawn around what appears to be a gun in Blevins’ right hand, as he looks over his left shoulder at the officers.

After the chase turns down an alley, Blevins is shot, still running.

At Freeman’s aborted news conference, Jeniffer Rohr, a friend of the Blevins family, criticized the officer who said “He’s got a gun.”

“He just gave himself a license to shoot Mr. Blevins,” Rohr said. She said Blevins was “assassinated.” Others were upset that Blevins was shot while running away.

In interviews with investigators, Schmidt said he feared for his life when he saw Blevins take his gun out of his pocket. Kelly said he believed the gun was aimed directly at him, and he was “pretty sure” Blevins fired the weapon at him.

The report from Freeman’s office says a shell casing from Blevins’ gun was found near his body. In a conference call with reporters, Freeman said authorities can’t be certain that Blevins shot at the officers, but it is irrelevant to the charging decision. He said merely pointing a handgun at officers is a threat that allows the officers to protect themselves.

“For our evaluation, the mere fact that he pointed a loaded handgun that he had fired earlier in the day … gives officers justification to fire his weapon,” Freeman said.

Minneapolis Police Chief Medaria Arradondo said in a statement Monday that he accepts and respects the prosecutor’s decision but cannot further comment until the criminal and internal investigations are complete. Arradondo promised to “continue to remain engaged, active and listen throughout the community.”

Both officers remain on paid leave, Minneapolis police spokesman John Elder said. An internal investigation has begun, and it will be up to the chief to decide when and if the officers return to the street, Elder said.

Freeman said toxicology reports on Blevins showed his blood-alcohol content was 0.162, double the legal limit for driving. Blevins also had THC, a component of marijuana, and other drugs in his system. Freeman said that was also irrelevant to his decision.

“The officers deserve the Minneapolis Police Department’s highest award the Medal of Honor and the respect of the population it swore to protect,” Kroll said. 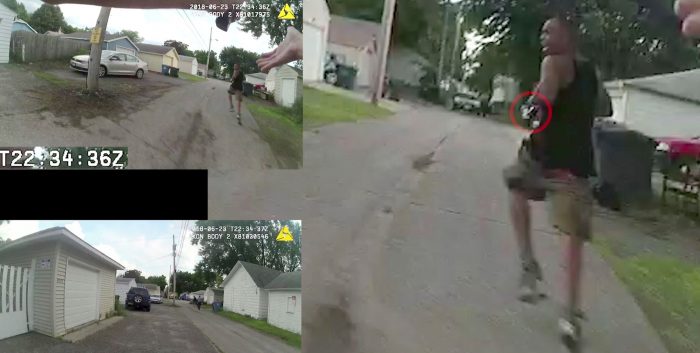 This June 23, 2018, image from multiple police cam videos provided by the Minneapolis Police Department shows a chase between Officers Justin Schmidt and Ryan Kelly and suspect Thurman Blevins, in Minneapolis. Authorities in Minneapolis released the body camera video Sunday, July 29 from the two police officers in the fatal shooting of Blevins, with the footage showing the man shot from behind after a frenetic foot chase and what appeared to be a gun in his hand. (Minneapolis Police Department via AP)

A protest of Blevins’ death was planned for Tuesday afternoon at the Hennepin County Government Center.

Some witnesses had disputed Blevins was armed, saying he was carrying a bottle or a cup. The videos showed a bottle in Blevins’ hand.

Blevins’ death prompted earlier demonstrations and community advocates demanded transparency and urged the swift release of body camera footage. Minneapolis Mayor Jacob Frey said Blevins’ family viewed the video about an hour before it was released publicly. He called Blevins’ death “tragic,” but declined to comment on what the footage showed.

“I know that right now in our city there’s a lot of pain,” he said. “Pain in many cases that I cannot understand.”

Blevins’ relatives previously called for both officers to face criminal charges . They renewed that call Monday, and also called for the officers to be fired.

The videos released Sunday by the city included raw footage from both officers’ cameras, as well as what it called a “stabilized” video that includes footage from both officers produced by the National Center for Audio and Video Forensics in Beverly Hills, California. Officials said that footage had gone through a process to identify pixels from each frame and aligned them to help limit shaking.

Minneapolis has been rocked by two high-profile fatal police shootings in recent years, including the November 2015 shooting of Jamar Clark, 24, and last year’s shooting of Justine Ruszczyk Damond, 40. Officers in the Clark case were not charged. Trial is pending for the officer who shot Damond.