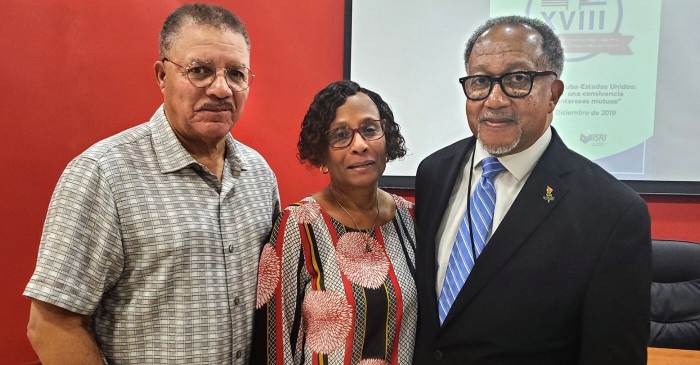 National Newspaper Publishers Association (NNPA) President and CEO Dr. Benjamin F. Chavis, Jr. joined experts and academics from the United States and Cuba in Havana to seek strategies, solutions, and projects they hope would help rekindle relations between the countries.

“The majority of the people of the United States want better relations with Cuba, and that is the will that must prevail,” stated Chavis, who counted among the delegation of 30 American scholars who attended the 18th edition of the Series of Academic Conversations on Cuba in the Foreign Policy of the United States of America.

Sponsored by the Research Center on International Policies and the Raul Roa Higher Institute for International Relations, the conference highlighted how the Trump Administration has setback U.S.-Cuba relations after former President Barack Obama worked toward a more agreeable relationship.

On behalf of the National Newspaper Publishers Association (NNPA), the national trade association of the Black Press of America representing 225 African American owned newspapers across the United States of America, I bring to each of you our expressions of solidarity and comradeship in the ongoing international struggle for freedom, justice, equality for all of humanity throughout the world.

Today’s conference is very important not only for the people of Cuba and for the people of the United States, but also this dialogue and these discussions over the next days here in Havana will have a positive impact, I believe, on improving the quality of life for all people throughout the world who especially cry out for freedom. I stand before you as a longtime freedom fighter, former U.S. political prisoner, journalist and as the President and CEO of the NNPA, but most importantly, I stand before you as your Brother and as your Comrade in our joint struggle and global movement for freedom and justice.

It is not in the interests of the people of Cuba for the blockade to continue.

The U.S. blockade of Cuba is a contradictory relic of the past, but it is a present day reminder of the awful, sinful, counterproductive, and devastating realities of international imperialism, exploitation and racism.

I can state without fear of reprisal that the Black Press of America does not support the blockade of Cuba. We demand an end to the blockade immediately.

We want to help improve relations between our two nations.

I say “our” two nations because, as a descendant of Africa living, striving and struggling in the United States, whenever I am in Cuba, I not only feel at home, I know that I am at home here in Cuba because of what Cuba has done and continues to do for Africa and for all African people throughout the African Diaspora, as well as what Cuba continues to do today internationally to improve healthcare for all of humanity throughout the world.

Several weeks ago, I spoke at the Embassy of Cuba to the United States on November 25, 2019 noting the anniversary when H.E. Comrade President Fidel Castro made his transition to eternal life. I noted then, and I want to repeat it here as part my intervention and statement to this outstanding gathering of colleagues and those who are interested in improving international relations.

The Cuban Revolution led by Fidel Castro was one of the most important and effective revolutions of the 20th Century against imperialism, colonialism and racism.

Today at the end of the second decade of the 21st Century, the Cuban Revolution led by Fidel Castro’s enduring legacy, government, values, commitments, achievements and vast social and economic transformations continue to set a righteous and transformative ideal for the rest of the world to learn from and to follow.

This past November 25th , I reminded the people gathered at the Cuban Embassy in Washington, DC, that when Fidel Castro dispatched thousands of courageous Cuban troops to Angola in southern Africa in the 1980’s, it permanently changed and reversed the tragic oppressive trajectory of imperialism, neocolonialism, and the brutal Apartheid South Africa’s quest to dominate and control all of southern Africa.

My remarks today are not just from reading the books of history that are in fact important to read for all who stand for the liberation of humanity from the systems and structures of oppression.

But my remarks are from being an actual firsthand witness to history being made and continuing to be made by the contributions and interventions of Cuban to the liberation of humanity.

I witnessed and had fellowship with Cuban soldiers in Angola in 1988 in the aftermath of the heroic victory of the Battle of Cuito Cuanavale in southern Angola.

I vividly remember as an African America Christian clergy going down into the fresh war-zone foxholes with Cuban soldiers who were deployed on the frontlines near Cuito Cuanavale.

In fact, that strategic and consequential victory of Angolan, Namibian, and African National Congress soldiers fighting alongside Cuban troops against the apartheid armed forces inside of southern Angola at the battle of Cuito Cuanavale actually led to the eventual release of Comrade Nelson Mandela from prison in South Africa.

That is a piece of history that sometimes does not get reported or appreciated in the so-called mainstream media in the United States. I am proud that the Black Press of America: African American owned newspapers, digital companies, social media channels, radio stations and other broadcast media does continue today to report and distribute the news about Cuba and about all of our people throughout the African Diaspora.

And, of course, the Republic of Cuba is a nation that is a vital and strategic part of the African Diaspora that sometimes is misunderstood, undervalued, and at times not referenced sufficiently in the local, national, and international media.

My point here, before moving on, is that history is important.

We should learn from history. What are the lessons of history that we all have to remind ourselves of today with respect to success of the Cuban Revolution?

What is the lingering relevance of White Supremacy and race in American foreign policy as well as its domestic policy when it comes to Cuba and the rest of the Diaspora?

The purpose of this conference goes beyond the articulation of contemporary analyses, new research data, and the stated quest for overcoming the new and old challenges to improve relations between Cuba and the United States.

I therefore state the following additional six points to further our dialogue and conversations about the current state of affairs, policies, challenges, opportunities and responsibilities for the conference to outline possible solutions to advance the interests of the people and government of Cuba in the wake of the continuation of the U.S. blockade, as well as the new sanctions and restrictions on this island nation.

Cuba’s national and international contributions to improving healthcare and medical research, in addition to the academic and professional provision of free medical education for thousands of aspiring and evolving medical doctors and post-graduate medical researchers.

Cuba has emerged as a world leader in the healthcare and medical education sectors.

Thus, the U.S. embargo and new travel restrictions stand as an obstacle to advances in healthcare and medical education for Cubans, Americans and for all of humanity.

Instead of imposing more economic sanctions and social restrictions on Cuba, the U.S. should try to learn from the success of the Cuban educational system.

We call for the establishment of a Free Trade Zone and free trade policies the United States and Cuba, as well as the repeal of the Helms-Burton Act that targets and discriminates against the economic, political and social interests of the people and government of Cuba.

We call for a bilateral focus between the United States and Cuba on the issues and challenges that millennials face with respect to youth leadership development programs and joint projects that have as a goal of increasing mutual understandings and affirmations of the interests of the youth of Cuba and United States to help improve overall bilateral relations.

Last but not least, are the opportunities and responsibilities to foster, promote and coordinate cultural exchange programs between the United States and Cuba. Both nations are rich with cultural genius and talent that should be more forthrightly mutually shared and affirmed by both Cuba and the United States. Basta la repression! Basta la imperialism! Basta la racism! Viva Cuba and United States Relations! Viva Fidel! Viva la revolution! A luta continua! Victoria es cert! Thank you for listening. God bless.