Jurors in the criminal retrial of Bill Cosby have a lot to consider as they sift through evidence presented during the two-week case, including testimony from a Federal Aviation Administration expert, who verified records presented by the defense that showed the comedian could not have been in Pennsylvania when prosecutors said he assaulted former Temple University employee Andrea Constand.

Flight records and Cosby’s tour schedule revealed the comic to be in various places including Wyoming, Florida, Arizona and ironically, Constand’s hometown of Toronto, Canada, when she claimed he drugged and assaulted her at his Elkins Park, Pa., home in January 2004.

The closest Cosby got to his Montgomery County home was 103 miles away at the Teterboro, N.J. airport where his private plane jetted him around the country during his tour.

Prosecutors had no concrete rebuttal to the records only suggesting that Cosby, who has been legally blind since early 2003, could have driven himself or taking a train to Pennsylvania.

“We knew everything that he was doing, and we were aware of all of his movement,” Kim Harjo, a former assistant to Cosby’s agent David Brokaw, testified during the trial.

Unwittingly, prosecutors may have helped Cosby’s cause. 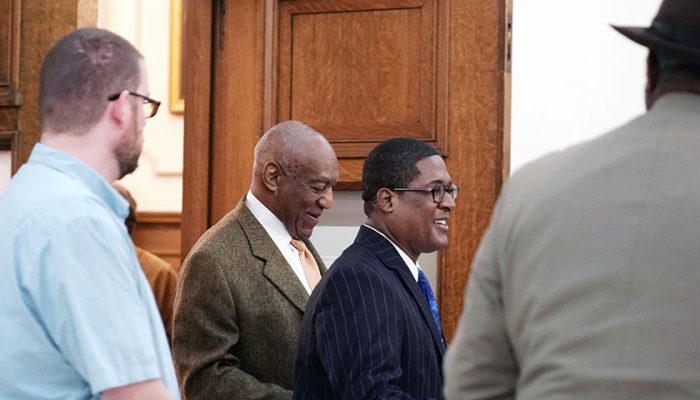 Flight records and Cosby’s tour schedule revealed that the comic was traveling during the time period that Andrea Constand alleged that the comedian drugged and sexually assaulted her. Actor and comedian Bill Cosby walks with his publicist Andrew Wyatt, during his sexual assault retrial at the Montgomery County Courthouse in Norristown, Pennsylvania, U.S. April 23, 2018. (POOL PHOTO)

Jackson testified that Constand had told her she could make up claims that a high-profile person drugged and sexually assaulted her and, because of the allegation, Constand would be able to get money, move back to Canada, go to school and open a massage therapy business.

Constand did settle a lawsuit with Cosby for more than $3 million and she did move back to Canada and opened a message therapy business.