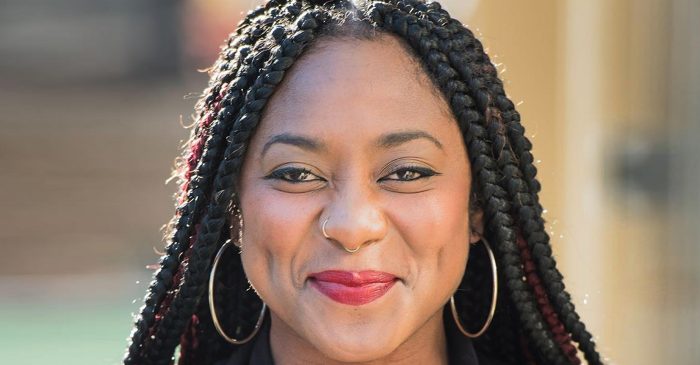 “I’ll say it’s really humbling when the community reaches out and lifts you up for the work you and your team is doing to make black people powerful,” said Garza, one of the co-founders of the Black Lives Matter Movement.

Garza, who coined the term “Black Lives Matter,” is an Oakland-based organizer, writer, public speaker and freedom fighter who also serves as the special projects director for the National Domestic Workers Alliance which stands as the nation’s leading voice for dignity and fairness for the millions of domestic workers in America, according to Garza’s online bio.

Along with Opal Tometi and Patrisse Cullors, Garza founded the Black Lives Matter network which is recognized globally for its focus on combatting anti-Black state-sanctioned violence and the oppression of all Black people.

Since the rise of the Black Lives Matter movement, Garza has become a powerful voice in the media with articles and interviews appearing in publications like Time, Essence, and the New York Times.

“Power means getting to make decisions over your own life,” Garza told NNPA Newswire.

Additionally, Garza said power is about making sure that there are consequences where needed, including at the polls.

“The power at the polls means that selecting a leader that will take our concerns and experiences into account because they are shaping policy and shaping culture in the United States and there are so many different barriers for Black people,” Garza said.

“For 2020, it’s still yet to be seen what’s on the table for Black people and [her latest empowerment nonprofit] Black Futures Lab will be working had to make sure candidates are speaking directly to the issues we care about and are listening to the proposals we have,” she said.

“The problems facing Black communities are complex. The solutions to these problems will come from our imagination, our innovation, and experimentation,” Garza said.

“Changing our communities for the better requires changing a culture that takes Black people for granted and changing policies and laws that make us criminals and keep resources from our communities, she said.

“Today, Black Lives Matter is an organization with over 40 chapters in four countries, and it is the civil rights movement of our generation,” she said.

“I think what we’ll see in the next year and next few years is Black Lives Matter moving into electoral politics and policy,” Garza said.

“Certainly I was motivated by my mom who is really a powerful and multi-talented Black woman who made a way out of no way,” Garza said.

“I’ve also been motivated by the hundreds of thousands of Black people who have come along on this journey for the past six years,” she said.