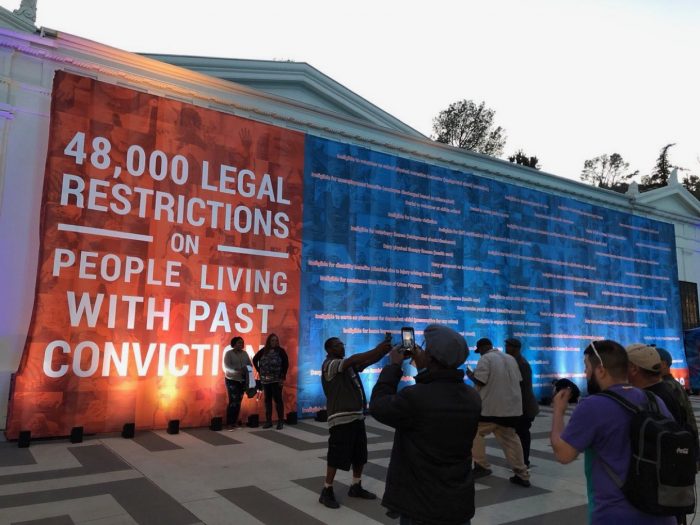 The “Wall of Barriers” visually depicted the 48,000 legal restrictions facing people with past convictions nationally at the #TimeDone Concert at the Greek Theatre in Los Angeles, Calif.
(Courtesy Photo Californians for Justice and Safety)

The smooth rhythms of L.A. natives rapper Nipsey Hussle, award-winning artist Ty Dolla $ign, and R&B Bay-area artist Goapele filled the speakers at the Greek Theatre on Sunday evening, Oct. 22 for the #TimeDone campaign’s free concert. The concert served as a launching pad to raise awareness of legal prohibitions on job and housing eligibility, other barriers that 70 million Americans living with a past conviction face after completing prison sentences.

“Failed policies have systematically made tens of millions of people across this nation and eight million of my fellow Californians second class citizens, even long after they’ve fully paid their debt to society,” said politically charged rapper and entrepreneur Nipsey Hussle. He is the artist responsible for controversial songs like “F*** Donald Trump”.

“The lasting barriers from old convictions negatively affect everyone in this country, especially children and families. We must solve this crisis so our communities can thrive.”

As Goapele sauntered about the stage singing her timeless classic, “Closer [to my dreams],” images encouraging attendees to register to vote flashed on the monitors. Between musical sets, videos played highlighting individuals from across California who have been impacted in various ways by the permanent restrictions to economic and family stability of even a single, old conviction. Individuals like Alisha Murdock who grew up with her mother being a victim of the high recidivism rate in the underserved South L.A. community. Murdock gravitated towards campaigns like #TimeDone and organizations like Project What that support those who have parents who have been incarcerated.

“I wanted to be involved in the #TimeDone campaign because so many people in my district and throughout California that are blocked from participating in the mainstream economy because of these silly laws that ban you from any number of things even though you serve your time and you have not done anything else wrong,” councilmember Marqueece Harris-Dawson (CD8) said.

The #TimeDone campaign presented by Californians for Safety and Justice, a non-profit organization working to replace prison system waste with common sense solutions for safe and healthy communities, and The Gathering for Justice, an organization founded by Harry Belafonte and led by Carmen Perez, seeks to reform the barriers to success on people living with past convictions with legislation.

“I think the fact that it brings all these different cultures together is super crucial because it shows that this issue affects everybody, but also knowing that it targets specific groups of people,” commented Murdock, who works as the youth justice program manager at RYSE Youth Center. 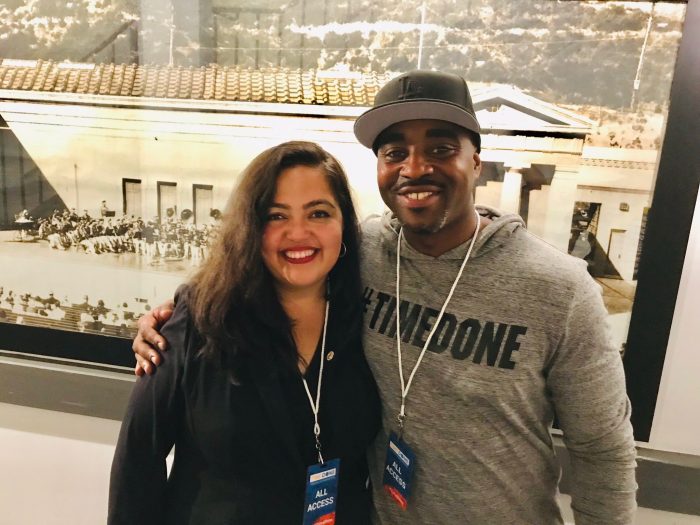 Presenters at the concert like Dawson pointed out staggering statistics. An example being that the United States loses approximately $87 billion in GDP a year due to work restrictions placed on the population of former prisoners and people with felony convictions. Californians for Safety and Justice were a heavy proponent of Prop 47, a ballot measure that was passed in 2014 that downgraded “non-serious, non-violent crimes” to misdemeanors enabling 10,000 inmates to be eligible for resentencing according to Lenore Anderson, executive director of Californians for Safety and Justice.

Ty Dolla $ign kept the evening going by putting on an emotionally charged performance as he ran through the crowd, exchanging hugs and words of encouragement with concert-goers. He shared with the crowd that his brother is currently incarcerated based on a wrongful conviction.

Prior to the show, people accessed critical services, including same-day record expungement and job connection services. The 6,000 concert-goers were also able to register to vote on the spot. The concert featured an Art Walk photo gallery display of how children and families are impacted by the persisting legal obstacles from convictions, and a “Wall of Barriers” that demonstrated the extent of the 48,000 legal restrictions Californians continue to face after they have completed their sentences and terms of past convictions.

When these restrictions are unrelated to the person’s crime it increases the difficulty for people with a criminal record to provide for themselves and their families. 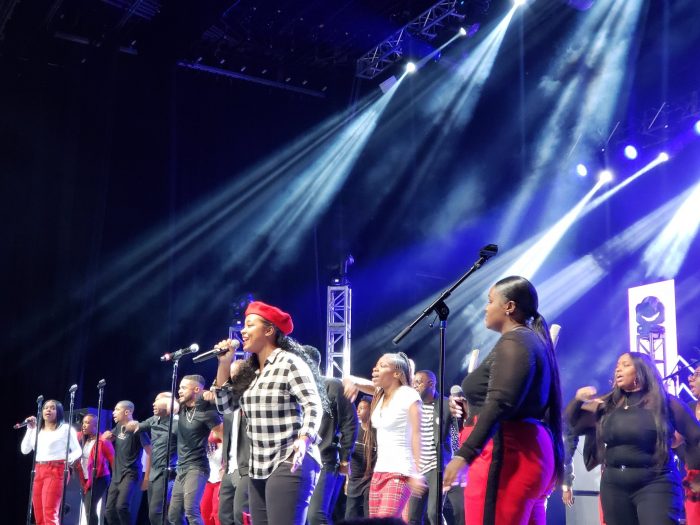 Voices of Destiny performs to bring awareness of the barriers that 70 million Americans living with a past conviction face after completing prison sentences at the #TimeDone Concert at the Greek Theatre in Los Angeles, Calif.
(Courtesy Photo Californians for Justice and Safety)

“#TimeDone is about educating the community, bringing us together and uniting us to rebuild safe communities, safe communities does not mean LAPD, it means a job, it means a good school, parks, arts, sports, it doesn’t mean LAPD,” cited Susan Burton, founder A New Way of Life Reentry Project. She created the project after being released from prison and facing challenges with the limited resources for residents of the South L.A. community as opposed to when she sought them out in more affluent areas like Santa Monica.  A New Way of Life Reentry Project provides legal and advocacy services on behalf of those that have been impacted by the criminal justice system. It was one of the #TimeDone campaign’s many partners.

For more information on the campaign, visit www.timedone.org.