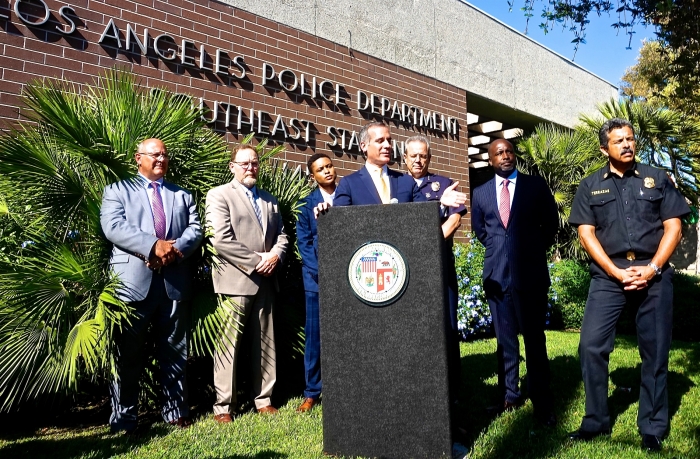 This enforcement action is part of a multi-pronged approach to close illegal cannabis shops. Photo By Brian W. Carter

“This is something that the Black community has to pay a lot of attention to,” said Harris-Dawson. “The [Cannabis Social Equity Program (SEP)] was put in place to make it so that Black communities that have been targeted by the war on drugs can get ahead in the new cannabis industry.

“If we don’t stop the illegal operators, that opportunity goes away, so it’s important to us for the preservation of our neighborhoods, but also, for the well-being of our people.”

This enforcement action is part of a multi-faceted plan to close illegal cannabis shops. During the press conference, it was stated that cease and desist letters were delivered to 231 illegal businesses, and the property owners of those businesses.

“This is an issue of equity, not an assault on cannabis users or sellers,” said Harris-Dawson. “City Council District 8 has far too many illegal dispensaries and we cannot allow this to mirror liquor stores in the 80’s, 90’s, and 2000’s.

“Illegal dispensaries poison our neighborhoods and their own customers by operating dangerous unregulated businesses. We have over seventy illegal dispensaries in our district and dozens are still listed on platforms like Weedmaps.”

Utilizing a new ordinance, the city’s Department of Water and Power has shut off utilities at 193 illegal dispensaries. Additionally, Councilmember Harris-Dawson introduced a motion allowing Building & Safety to padlock, board up, or fence off illegal businesses.

Councilmember Monica Rodriguez supported this motion and proposed a new city policy that would charge the operators of illegal businesses for the costs of these enforcement actions. Councilmember Harris-Dawson and the Cannabis Enforcement Task Force are using every tool available to close down these illegal, nuisance businesses.

“This is an event of entrepreneurship in the worst form,” said LAPD Chief Michel Moore. “And that is that those unscrupulous operators recognize that most of the general public is walking around and now knows that adult use of cannabis is lawful. 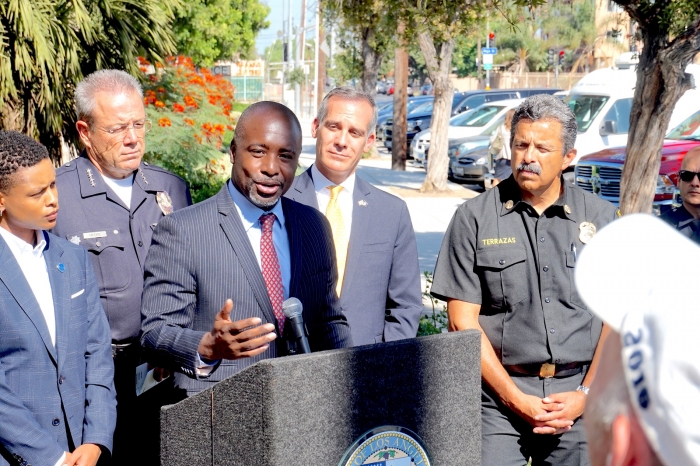 “So, they see a cannabis retailer and their paying little or no attention to fact of whether it’s licensed or not and there are people who, frankly, are just trying to make a quick buck.

“What I’m happy to report [is] City Attorney [Mike] Feuer and the Cannabis Task Force efforts are targeting the land owners, landlords that are purposely allowing these unlicensed locations to operate throughout the community and councilman [Harris-Dawson] is correct—the area being most exploited is South Los Angeles.”

The Department of Cannabis Regulations implements equitable cannabis programs including the SEP. In addition to promoting equitable ownership and employment opportunities in the cannabis industry, SEP works to repair the harm caused by the War on Drugs and the disparate enforcement of cannabis prohibition.

“The Mayor’s Cannabis Task Force is a great example of the city family coming together to develop a progressive cannabis enforcement strategy that prioritizes equity and saves extreme punitive measures for the most serious offenders,” said Los Angeles Department of Cannabis Regulations executive director, Cat Packer.

“We are pleased to join the Mayor, City Council and general managers who are participating on the city’s Cannabis Enforcement Task Force to ensure that the city of Los Angeles models cannabis policies that are centered in equity including our enforcement.”

Some illegal dispensaries have gone as far as running generators on their rooftops to continue operations after utilities are shut off.

These illegal operations can sell harmful unregulated products and make it difficult for legal dispensaries to succeed, specifically, SEP participants that come from South L.A.

“We’re talking about a coordinated effort to root out bad actors,” said L.A. Mayor Eric Garcetti. “Just as we would with illegal bars that pop up in the neighborhood or illegal liquor stores.

“Illegal operations are getting in the way of opportunity.”