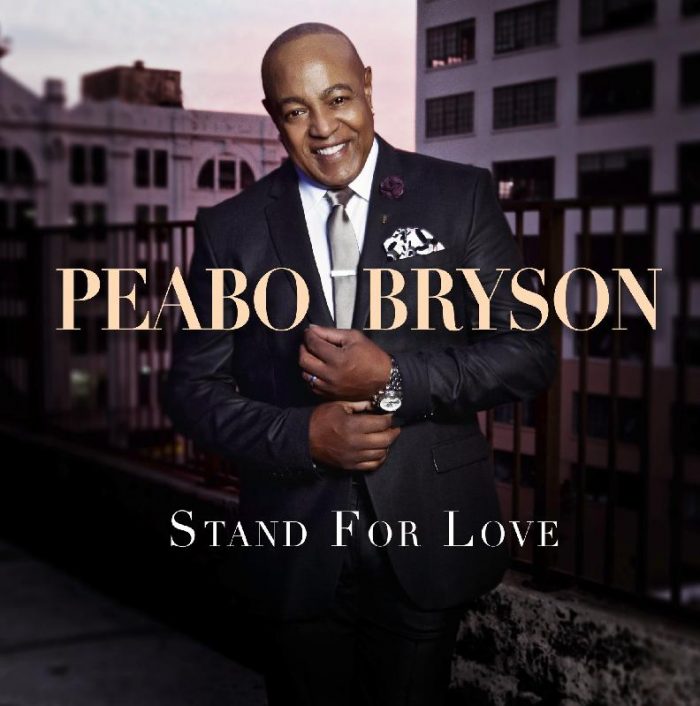 ‘Stand For Love’ is the new release from Peabo Bryson, available from Capitol Records.

Peabo Bryson grew up in South Carolina reading Black-owned newspapers like the Palmetto Leader and the Lighthouse and Informer.

And, the legendary crooner who’s new album, “Stand for Love,” dropped on Aug. 3, said he felt comfortable opening up to the Black Press about his award-winning career, latest CD, and his 7-month-old son whom he spent the better part of an hour-long interview cooing over.

“[Mainstream] news is hard to trust. I want to be the king of real news, not fake news,” Bryson, 67, said with a hearty laugh.

“Growing up in the Black culture meant reading Black newspapers and it also meant that you were a cat in a room full of rocking chairs and if you emerged from that room, you really were something,” he said.

Bryson sat on the front porch of his Buckhead, Georgia home, watching a family of deer roam by as the southern sky above turned dark because of an impending storm.

Having recently completed his 21st studio album with the legendary production duo of Jimmy Jam and Terry Lewis, Bryson said he was as excited as ever for his new music and accompanying tour that will have him travel all over the United States and to Japan.

First, however, he wanted to talk about his son.

“I have such a beautiful family and my little man … I can tell you it’s like watching a mini version of myself. Almost every single aspect of him reminds me of me,” the proud father said.

One of the premiere vocalists in music over the past 40 years, Bryson has earned two Grammy Awards and two Academy Awards – he’s also responsible for a memorable 1992 Oscar night performance with Angela Lansbury and Celine Dion as they earned rave reviews for their performance of the title track from the movie, “Beauty and the Best,” which won Best Original Song.

With hits that included duets with Natalie Cole, Roberta Flack and Regina Belle, Bryson has the distinction of being the first artist in music history to have separate records topping four different charts.

He believes his new album, “Stand for Love,” has even more hits, particularly because of the added touch of Jam and Lewis.

“Excited doesn’t begin to describe what it’s like working with them. The first thing you notice is the absence of ego and self-importance,” Bryson said of the producers who have worked with Prince, Michael Jackson and many others.

Together, Jam and Lewis made Janet Jackson an international icon.

“My challenge to them was, ‘Can you make me current without destroying what has taken me a lifetime to accomplish?’” Bryson said.

“I asked them if they could put me in today’s conversation about music, to make me valid to be in a conversation. I couldn’t think of anyone else.”

Even prior to its release, the new album has caught on.

The lead single, “Love Like Yours and Mine,” has rocketed to No. 3 on Billboard’s Adult R&B list and the second single, “All She Wants to Do is Me,” has already been featured on the Showtime hit series, “The Chi.”

Part of Bryson’s success can be credited to his being able to say no in a world where everybody is accustomed to hearing the opposite, he said.

“I was saying no to drugs long ago. Some might have called me a ‘goody-two-shoes’ and a bunch of other things but I tend to look at it as being young and pragmatic as opposed to young and restless,” Bryson said.

The singer, who’s career has yielded such hits as “Feel the Fire,” “Tonight I Celebrate My Love,” and “Can You Stop the Rain,” also has kept the proper perspective on celebrity and real life.

“There are two things you have to understand about celebrity and success,” Bryson said.

“[Celebrities] become invulnerable and that’s what they think success is but the hardest thing to navigate for a human being is not adversity, it’s success itself. Every single virtue you’ve ever had or everything you’ve ever hoped to achieve. Look, I treat every human being that I come in contact with the way I want to be treated and look, I buy my own toilet paper.”

For Bryson, the new album is just one more thing he’s grateful for.

“At this stage of my life, I appreciate things more completely and it’s not just regular gratitude,” he said.

“I’m starting to appreciate the concept of second-hand grace and I’m not sitting around waiting for that big grace. To have this kind of success and a 7-month-old to carry my name and to marry my best friend … yes, I’m grateful,” he said.