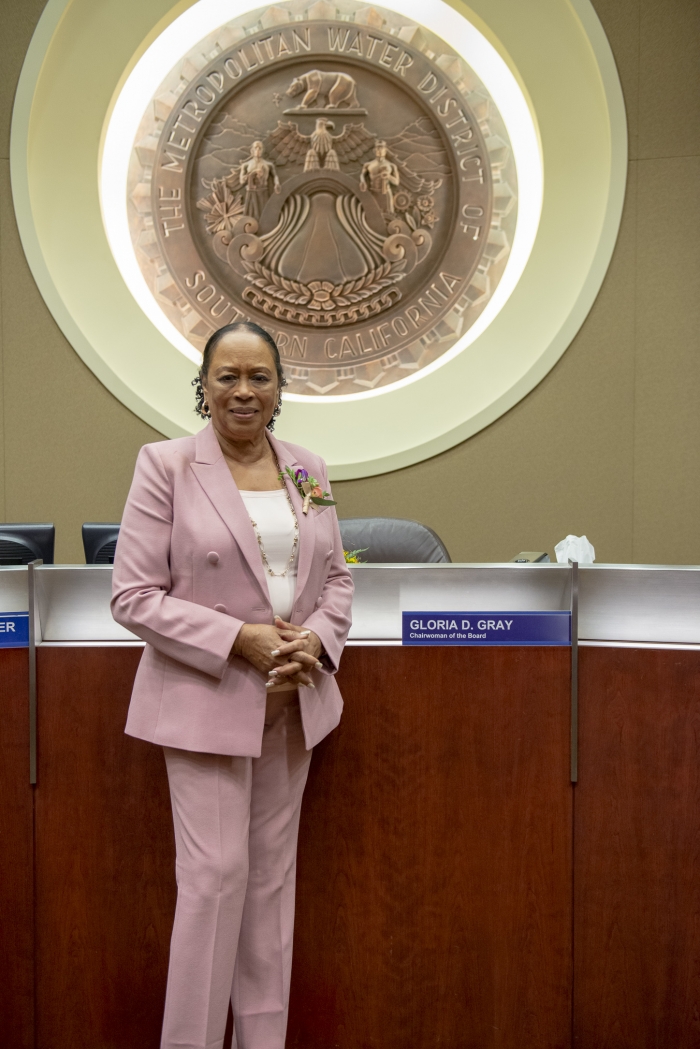 Where there is water, there is life. Since human civilization began, it has been within our instinct to build major capitals and cities around great bodies of water. That is why there is immense power in sitting as Chairwoman of the Board of the Metropolitan Water District of Southern California; it holds the key to the growth of the population for over 19 million people.

These seats of authority are critical, the need for equitable representation is a necessary commodity. Gloria Gray knew what it meant and worked to achieve that goal; she devoted 12 years, eventually shattering the glass ceiling and being the first African American woman to sit on the board in the district’s 90-year existence. Gray explains her love for collaboration, the importance of her role for the collective community, and the effects of her decisions on future generations to come.

Gray has always been drawn to collaboration; much like an irrigation system, she believes in a collective of moving parts to work in harmony.  The coalition of sharing a common goal and working towards it creates a pathway to a consistent flow of equity and growth across all communities.

She stated, “Collaboration is very important to me; I find that being a leader its always important to collaborate with individuals because I found that my success is not dependent on just me, it’s really a team approach.” Gray continued, “I really do believe in the value of people and what they bring to the process …” She expressed the importance of building relationships throughout her career.

The Chairwoman of the Metropolitan Water District of Southern California shared her experiences and the impact that will echo throughout history for generations. One out of many projects Gray had her hands on included “development, adoption and implementation of the Colorado River Drought Contingency Plan.”

She explained the plan’s focal point was the allocation of water and conservation. Reflecting on that moment she related back to the energy behind coalition, Chairwoman Gray stated, “It was not just one person or one agency, that made that plan a success.” Gray emphasized, “Although Metropolitan took the lead in bringing people together, it did involve seven states, so it’s a great example for collaboration.”

The project included a cohesive work effort that stretched across the border into Mexico. The agreement was a response to water conservation and reliability before it reached a critical point where the state would have to get involved. Gray reflected on being part of the signing ceremony for that plan, it left her in admiration of the monumental moment for that day. Chairwoman Gray painted the picture of being on top of the Hoover Damn and she looked around taking in the air of change. She disclosed that it was one of her proudest moments.

Gray disclosed that the representation is a necessity and a level of responsibility that she holds with serious care. There are 38 board members, which represent 25 member agencies. Chairwoman Gray highlighted the importance for representation because water is important to everyone.

“It really is an honor to serve as Chair …” Gray continued, “It was a memorable moment because it never happened before.” The newly pledged Chairwoman brought to light all the new beginnings the Metropolitan Water District of Southern California is seeing with having a woman of color for the first time in 90 years. 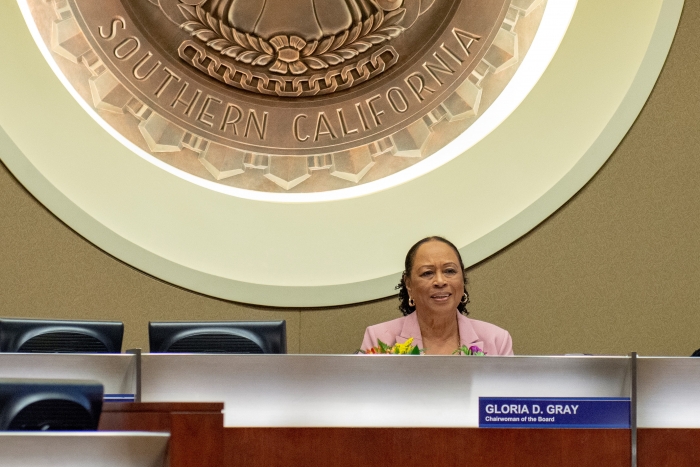 Gray illuminated one of her goals in this leadership position. She presented a mission at an official board meeting on September 15, “I want to continue working with all of you to advance Metropolitan as a leader. A leader on behalf of our member agencies and the public. And for the employees of this organization, who have shared with us both their pride in working here and their desire to improve Metropolitan, we owe them no less.”

Reflecting on the responsibility of the Metropolitan Water District of Southern California, there is great power in the movement of water. Found on the Metropolitan website, they described their environmental role as the following, “Metropolitan built and maintains a water supply system that is the cornerstone of the region’s $1 trillion economy.  As the nation’s largest municipal water provider, Metropolitan owns and operates five separate treatment plants, among the largest in the world.”

Chairwoman Gray has a hand in guiding the movement of life. This is an important placement to have, because her footing at the table directly influences the prosperity of many communities across southern California; Gray emphasized the necessity of safe drinking water. She stated, “Safe drinking water is critical, its essential, we must have safe drinking water.” She went on to share that people of color do not have very much input on what happens in communal water policy, until now.

Gray journeyed through her recruitment into the Water sector, but she started within the community, at the L.A. County Health Department. Chairwoman Gray shared, that before being recruited, she never thought about where her water came from. She expressed she came in green, new to the public office of water. But after she felt the first wave, Gray dived right into her role she needed to play for the community.

With her newfound clarity about the water policy, Gray mentioned she spends a great deal educating the community. Chairwoman Gray breaks down the critical role the Metropolitan Water District of Southern California plays in the level of clean water available to multiple areas. She expands the invitation to more people of color to start a career in water policy. Gray broadened her reach along with her dedication when Karen Bass who was Speaker of the House at that time, appointed Gray to a statewide water commission; she was also the first woman of color in that party as well.

Dedicated to the Metropolitan Water District of Southern California for 12 years, Gray has spent the last two years serving as Chairwoman of the entire Metropolitan Water District of Southern California. In full transparency, Gray stated, “ What struck me as very meaningful at that moment when I was sworn in, there were people in that room at Metropolitan that have never been there before …” she elaborated on the significance, “ It was an opportunity for people who knew nothing about Metropolitan, who came to that building and saw someone who represented diversity, a woman, a woman of color.”

Chairwoman Gray said within her closing remarks, “My work is not done. I have a lot more to do and a lot more to accomplish. And I plan on doing just that.” Gray emphasized her newness to the field, which worked in her favor; she came with the heart of community heavily ingrained into her core beliefs. She knew she was not traditional leader; Gray is there for the people. She expressed her passion for the foundation of the Metropolitan Water District of Southern California and what a proud moment it brought to family. But, on a deeper scale, Chairwoman Gray’s present decisions in water policy, benefits the movement of her future lineage alongside the rest of Southern California.