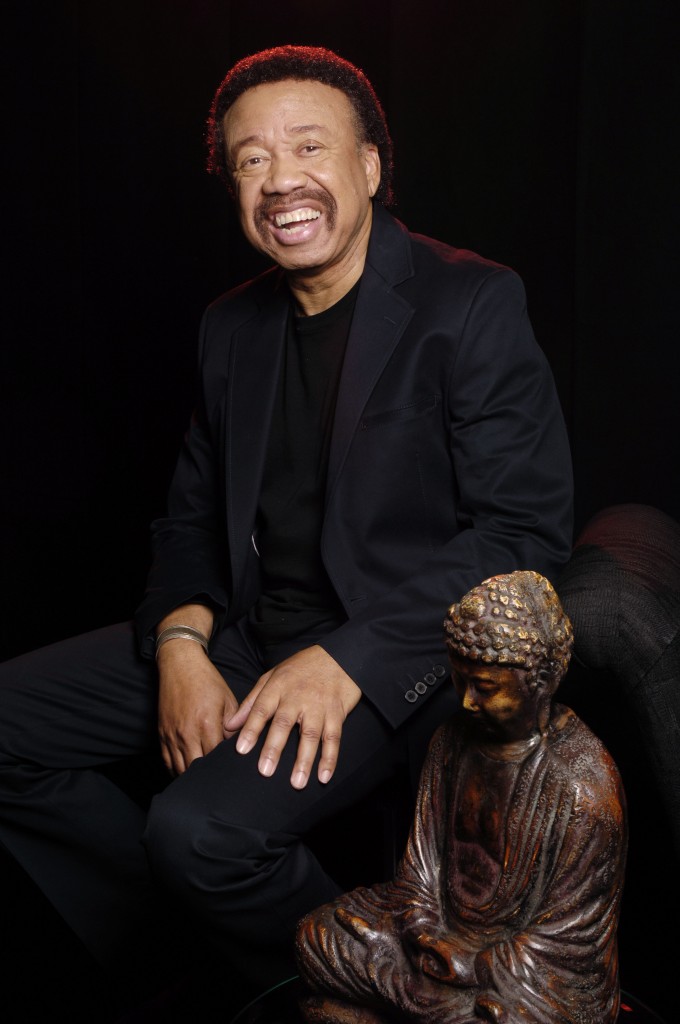 Maurice White, prolific songwriter, composer, producer, arranger, leader, and co-founder of one of most the successful bands in the world died on Thursday, February 4, 2016 at his home in Los Angeles. The cause of his death is unknown but it is known that White had battled Parkinson disease for two decades. He was 74.

“My brother, hero and best friend Maurice White passed away peacefully last night in his sleep,” wrote his brother and bandmate, Verdine White. “While the world has lost another great musician and legend, our family asks that our privacy is respected as we start what will be a very difficult and life changing transition in our lives. Thank you for your prayers and well wishes.”

Maurice White epitomized the meaning of an enlightened man long before pop culture embraced those words. His love of harmony and peace reverberated throughout the lyrics and sound that was uniquely Earth, Wind and Fire or as we affectionately called them, “the Elements.” Ask anyone to identify an EWF song and they absolutely can. President Barack Obama in a message posted on social media said this of White, “With his brothers and bandmates of Earth, Wind and Fire, Maurice fused jazz, soul, funk and R&B into a quintessentially American sound that captured millions of fans around the world. Their playlist is timeless; the one that stills brings us together at birthdays and barbecues, weddings and family reunions. 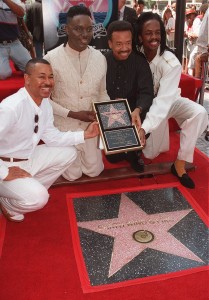 In a 2013 interview, his brother Verdine said, “We had a strong leader. We really looked up to Maurice…you have to understand that we were 21 years old when we started our journey with Earth, Wind and Fire and Maurice was 31, so he had done a lot more things than we had.” “Maurice was interested in establishing a credibility of a different morality about musicians and their lifestyles. So we were into healthy food, meditation, taking vitamins, reading philosophical books, being students of life,” Verdine said.

White was the son of a doctor and as described by Rolling Stones magazine, the grandson of a New Orleans honky-tonk player. He grew up in Memphis, a perfect breeding ground for an artist whose musical repertoire would go on to include the drums and the African thumb piano, the kalimba. White moved to Chicago in the sixties with his family and sang gospel during his early years. He would study at the Chicago Conservatory of Music as a percussionist.

It wasn’t long before White began playing sessions with the likes of Muddy Waters, Ella James, Buddy Guy, Billy Stewart and the Impressions. White’s musical future changed when his path crossed with jazz pianist Ramsey Lewis. White would join the Ramsey Lewis Trio and during that time he would learn to play the Kalimba, generating a sound that would become essential to the Earth, Wind and Fire groove. Of that time with Lewis, White said, “Ramsey helped shape my musical vision beyond just the music. I learned about performance and staging.” 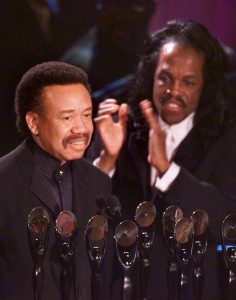 Bass guitar player of Earth, Wind & Fire, Verdine White, right, applauds his older brother and the band’s leader, Maurice, as the group is inducted into the Rock and Roll Hall of Fame during the 15th Anuual induction dinner in New York Monday evening, March 6, 2000. The band, which rose to prominence in the Seventies, solidified the growth of black album music as it brought together the earlier sounds of jazz, blues, R&B, pop, gospel, funk and deep soul. (AP Photo/Kathy Willens)

After experiencing modest success with his first group the Salty Peppers, White co-founded Earth, Wind and Fire (named after the three elements in his astrological sign) with his younger brother Verdine, the group’s charismatic and ageless bass player. The group would later change their initial band members to include a constellation of extraordinary talents in their own right; Philip Bailey, Larry Dunn, Ralph Johnson, Al McKay, Verdine White (brother), Fred White (brother), Johnny Graham, Roland Bautista and Andrew Woolfolk.

Between Bailey’s falsetto, the fabulous horn section, White’s tenor, and the musical gifts of all the band members, Earth, Wind and Fire forever changed the landscape of R&B and pop. With the release of Head to the Sky in 1973, the Elements began a reign that would take them around the world many times over.

The discography of EWF could easily be called the soundtrack of life in the 70s and 80s; Keep your Head to the Sky, Devotion, Shinning Star, That’s the Way of the World, Sing a Song, Reasons, Can’t Hide Love, All About Love, Wait, Sun Goddess, Getaway, Serpentine Fire, Got to Get You in My Life, Boogie Wonderland, Sailaway, and After the Love Has Gone. The band would sell over 100 million records worldwide, earn six Grammy Awards, four American Music Awards, receive a BET Lifetime Achievement Award, five Soul Train Music Awards, and a NAACP Image Award. The band was inducted into the Rock and Roll Hall of Fame the Songwriters Hall of Fame, and the Vocal Group Hall of Fame. In what is sure to be an emotional moment for the band and fans alike, Earth, Wind and Fire will receive a lifetime achievement award from the National Academy of Recording Arts and Sciences (the Grammys) on February 15, 2016 along with Herbie Hancock and Run DMC. 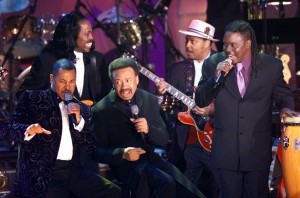 Members of Earth, Wind & Fire surround the band’s leader and founder Maurice White, center, as they perform following the group’s induction into the Rock and Roll Hall of Fame in New York Monday evening, March 6, 2000. The band, which rose to prominence in the Seventies, solidified the growth of black album music as it brought together the earlier sounds of jazz, blues, R&B, pop, gospel, funk and deep soul. (AP Photo/Kathy Willens)

EWF was also known for their use of elaborate lighting effects, choreography, pyrotechnics in their live shows, their artistic album covers – considered works of arts by many, and their stylish costumes. But it was always the music…the lyrics that were the soul of White and EWF. “From my youngest days, I always felt certain affinities with the idea of being a preacher,” White said. “Being joyful and positive was the whole objective of our group. Our goal was to reach all the people and to keep a universal atmosphere. All of our songs had that positive energy. To create uplifting music was the objective.” And boy did they succeed.. who else could write a song about his love of an instrument (the Kalimba) and make us love it too?

After his Parkinson diagnosis, White stopped touring with the band in the 1990’s. He continued to produce and work on the management side for the group. White was also a sought after producer by others. He brought up Deniece Williams’ “Free,” and the Emotions “Best of My Love,” to name a few of his outside projects.

For White, the soul of Earth, Wind and Fire remained rooted and grounded in goodness and hope. White said it best in a past interview with the Chicago Tribune, “It’s important to put the emphasis on the positive aspect. I have learned that music helps a lot of people survive and they want songs that can give them something – I guess you could call it hope.” 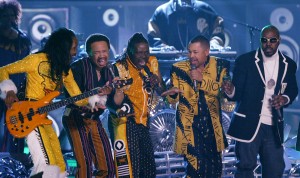 Forever a believer in humanity and the greater good, White described the origin of one the band’s greatest hits, “Shining Star.” “I was out for a walk one night in rural Colorado. I was overwhelmed by the beautiful clarity of the night sky and the chorus came to me – Shining star for you to see – what your life can truly be.”

On February 4, the band tweeted a fitting tribute to White writing, “Our brother Maurice White passed peacefully in his sleep this morning. The light is he, shining on you and me.” An exquisite photograph of White walking towards one of the remaining Seven Wonders of the World, the Pyramids at Giza, accompanied the tweet.

Maurice White left us a treasure trove of music that will live on. President Obama eloquently and soulfully captured what Maurice meant to us: “Only Maurice could make such sophisticated songs so catchy. Only he could inspire generations of such diverse artists. And only he could get everyone – old and young, black and white – to let the groove move them on the dance floor.”