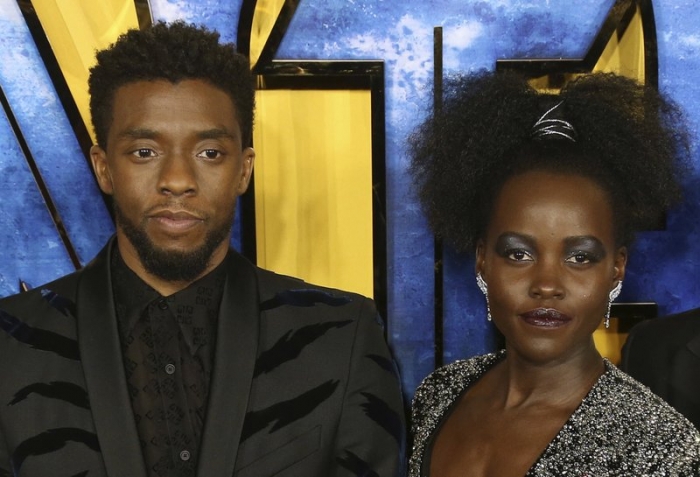 Chadwick Boseman, left, and Lupita Nyong’o arrive at the premiere of their film “Black Panther” on Feb. 8, 2018, in London. Nyong’o has written a long and stirring tribute to Boseman, her late cast mate, calling him a man whose power will “reverberate for generations” in a message posted to her social media accounts 11 days after Boseman’s death from colon cancer at age 43. (Photo by Joel C Ryan/Invision/AP, file)

Lupita Nyong’o has written a stirring tribute to her late “Black Panther” co-star Chadwick Boseman, calling him a man whose power will “reverberate for generations.”

“I write these words from a place of hopelessness, to honor a man who had great hope,” the actress writes in the message posted to her social media accounts Tuesday, 11 days after Boseman’s death from colon cancer at age 43. “The news of his passing is a punch to my gut every morning.”

Nyong’o, who played Nakia opposite Boseman’s T’Challa in the blockbuster 2018 film, says she was struck by his “quiet, powerful presence” and an energy that seemed immortal which manifested itself through his carefully chosen words.

“He used his mouth to build, to edify, never to break,” she writes. “And he used is to tell some regrettably lame dad jokes.”

She says Boseman “cared so much about humanity, about Black people, about his people” and that “his power lives on and will reverberate for generations to come.”

“He made great art. Day after day, year after year,” Coogler said in a statement. “That was who he was. He was an epic firework display.”

Jordan wrote directly to Boseman, saying, “Everything you’ve given the world … the legends and heroes that you’ve shown us we are … will live on forever. But the thing that hurts the most is that I now understand how much of a legend and hero YOU are.”