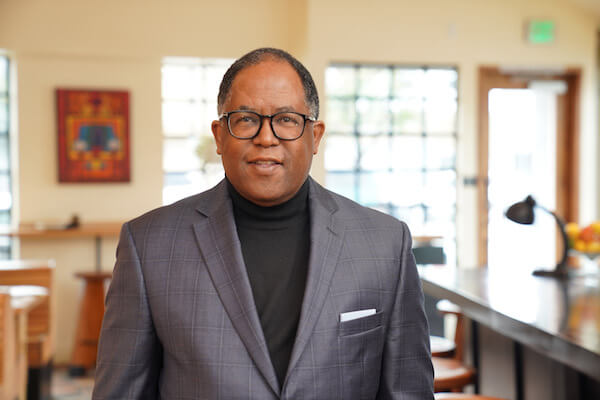 Los Angeles Public Officials must prove their loyalty and commitment every day they hold their position. Their oath includes preserving the health, safety, and protection of the lives of the community.  Supervisor Mark Ridley-Thomas has upheld that responsibility since 2008, and with much pride, Los Angeles watches him prepare for a new chapter in his public service career.  Through his patience and determination, Ridley-Thomas saw monumental works come to pass. He has devoted much of his life’s energy to the betterment and improvement of Los Angeles.

Former Supervisor, Ridley-Thomas favored terms like “resolve,” and “ingenuity,” because that’s what he found it takes for long-lasting initiatives and measurements to become a reality for underrepresented communities.  As the former second-district supervisor prepares for his role as a councilmember, there is a permanent imprint of his journey over two-million people that benefited from his work ethic.

Councilmember Ridley-Thomas evolves in the heightened state of change. As he began to lay the framework down as a member of the Los Angeles Board of Supervisors, the economy had reached a point of recession. Additionally, the world witnessed the first Black President of America sit in the Oval Office.

In this new chapter, Ridley-Thomas finds his footing as a councilmember, as the world faces a moment of grave uncertainty during a viral pandemic. As well as, a new level of equality has erupted, and the masses heed the words of the First Black woman Vice-President of the United States. One can say Councilmember Ridley-Thomas is aligned with unprecedented moments in history.

Throughout Ridley-Thomas’ career, the board meetings were long, and the list of concerns in his jurisdiction was extensive.  Facing homelessness, vulnerable youth, and inequality in highly compacted communities, Ridley-Thomas looked at these generational milestones and honed into ways to meet them with a customized solution. For Ridley-Thomas, there is always a way to the idea of equity and making it a reality for all Angelenos. 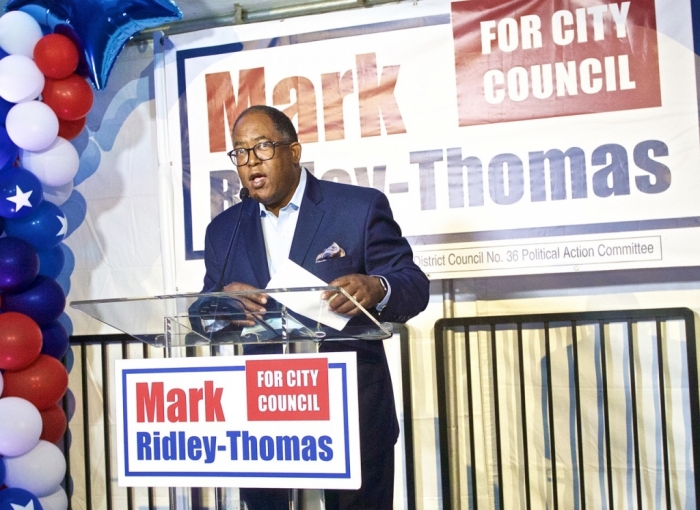 His words riled thousands, as Ridley-Thomas spoke numerous times about the truth on what can be done for the people of Los Angeles. Ridley-Thomas stands for results; each day as the supervisor of the second-district, he prepared to exercise the oath as a public servant and hear the concerns of two-million people. He has walked the same blocks of every community member, and seen those laying on the ground with their palms stretched out. Ridley-Thomas never turned a blind eye to an imbalance that lives in the streets of Los Angeles.

Noteworthy acts like Measure H will honor the community long after the movement of Ridley-Thomas. Measure H is an initiative, combatting the escalated rise in the population of the unsheltered. In 2017, Angelenos voted to tax themselves, and fund directives that look to end the tragedy for thousands experiencing homelessness.

Ridley-Thomas sat as Board Chairman when Measure H was voted in, and his words were captured, “Thanks to voters’ trust, generosity and compassion, we now have the means to implement proven strategies to end and prevent homelessness on a massive scale, and address the defining civic issue of our time.”

Working diligently right up to the brink of the COVID-19 outbreak, Ridley-Thomas spoke at the Safe Landing project in early February. As previously noted, Safe Landing was an initiative created to host ten local families in mobile homes of modern design. In its presentation, Ridley-Thomas revealed the speed of this directive coming forth in one month; he enlisted that as one of the miracles he has seen in his lifetime. 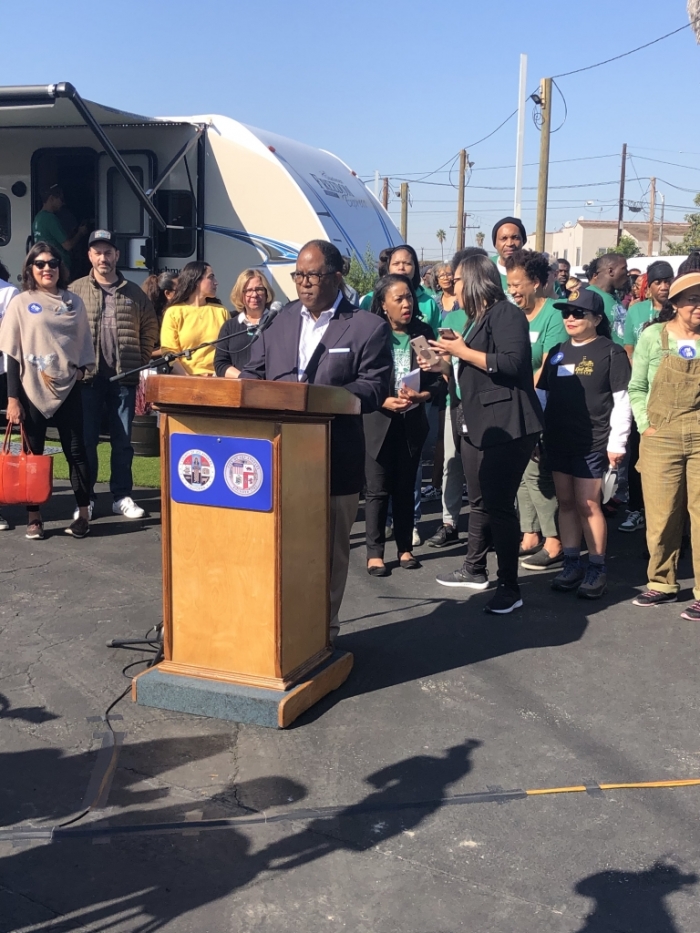 At the forefront of every platform Ridley-Thomas has stepped on, the mission for racial equity has always been present.  Ridley-Thomas demonstrated his understanding of justice for all, in directives such as the ATI/ODR, and the Anti-Racism motion. More recently in his career, Ridley-Thomas orchestrated a six-page measurement, addressing institutionalized racism among the County walls of Los Angeles. In July, he made the call for recourse and a movement for anti-racist sensibility.

Supervisor Ridley-Thomas held a virtual briefing, and broke down the benchmarks of the “establishing an anti-racist Los Angeles County policy agenda.” During the wake of health and wellbeing, there needed to be an immediate action for equality for people of color in Los Angeles.

The COVID-19 outbreak did not distinguish the fire Ridley-Thomas had for equity. He did more than hold virtual meetings and socially distanced discussions. Ridley-Thomas physically moved and sought to help the community by providing them with supplies needed to waiver this viral pandemic. In May, Ridley-Thomas rallied for unincorporated areas to receive 1.8-million dollars in federally funded emergency rental assistance.

Areas under the second-district jurisdiction include Athens, East and West Rancho Dominguez, Florence Firestone, Ladera Heights, Lennox, View Park, Windsor Hills, and Willowbrook. Within his latest acts during the COVID-19 pandemic, Ridley-Thomas traveled for several weeks and passed out over 10,000 masks to essential workers across the second-district. 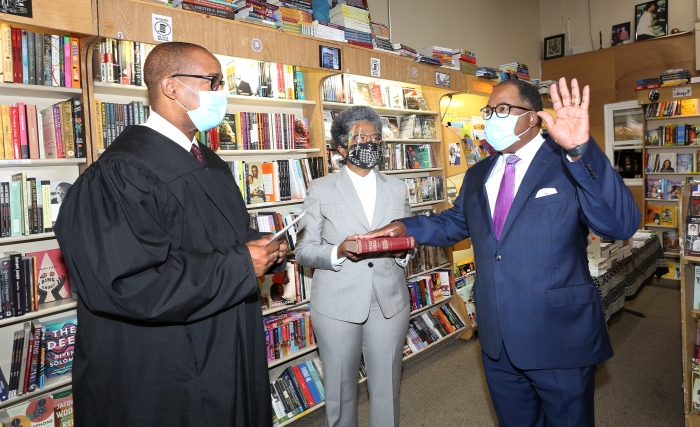 Since the pandemic has escalated to over 200,000 cases, masks have been in high demand. With the majority of Personal protective equipment (PPE) reserved for medical centers and first responders, Jobs in underserved communities are left with even fewer preventative resources. This environment leaves them exposed to the risk of community transmission.

Ridley-Thomas acknowledged the vulnerability that left people of color, they still have the essential responsibility to work during COVID-19. This created tremors that could engulf underserved neighborhoods. Ridley-Thomas has shown persistence, unwavering commitment, and the necessary level of work needed to be done in the community.

Reflecting on his time in public service, Ridley-Thomas said, “I find this work fulfilling. I deliberately chose to stay here all of my life, because I see so much opportunity to do good— to make a difference.” Ridley-Thomas continued, “To me, that is what life is about, so it’s pretty natural for me to salute servant leadership, and that is essentially what I do.” The community looks forward to the continual devotion and civic duty Councilmember Ridley-Thomas will put forward in the coming changes of history. 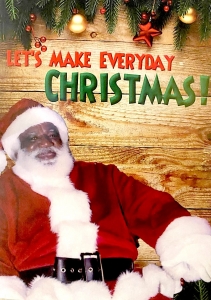