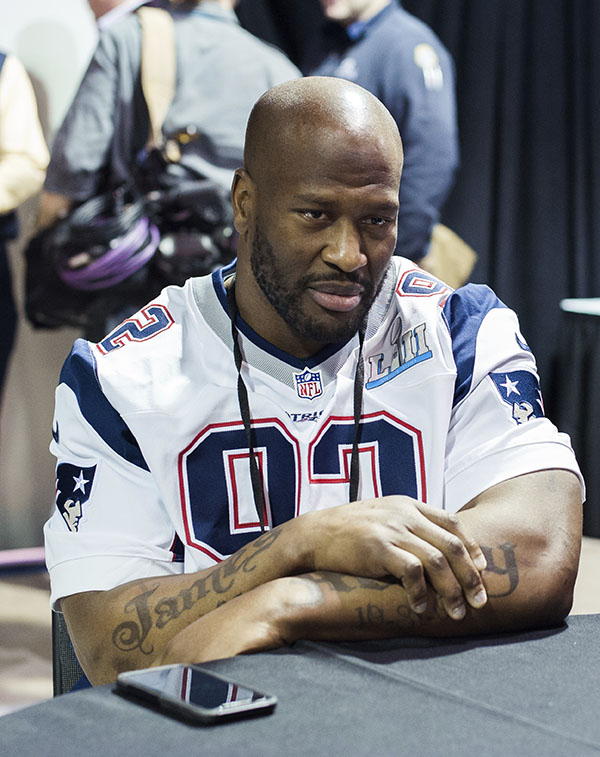 New England Patriots linebacker James Harrison (#92) speaks during a press conference held ahead of Super Bowl LII by the New England Patriots at the Mall of America in Minneapolis, MN on February 1, 2018 (Photo by TJ Roth/Sipa USA)(Sipa via AP Images)

James Harrison is taking another shot at retirement, and this time it’s likely to stick for the longtime Pittsburgh Steelers linebacker.

The five-time Pro Bowler, two-time All Pro and 2008 NFL Defensive Player of the Year announced on Instagram early Monday he is stepping away from the game following a 15-year career that saw him go from undrafted free agent to one of the most feared players in the league.

Harrison, 39, posted a collage of pictures of his two sons and noted he’s “missed way too much for way too long … and I’m done.”

Harrison played nearly his entire career with the Steelers, collecting 80.5 of his 84.5 career sacks while wearing black and gold, a franchise record. He spent the 2013 season in Cincinnati and signed with New England late last season, appearing in all three playoff games for the Patriots, including their Super Bowl loss to Philadelphia.

This is the second time Harrison has called it quits. He retired briefly in September 2014 only to be lured back to the Steelers. He remained productive into his late 30s, registering at least five sacks from 2014-16. Not bad for a player who went undrafted after graduating from Kent State and spent the early portion of his career primarily on special teams.

Harrison compensated for his relative lack of height _ he’s listed at 6-feet tall _ with remarkable strength and a relentlessness that made him one of the best edge rushers in the league and a vital part of a team that reached the Super Bowl three times from 2005-10, winning it twice.

His 100-yard interception return for a touchdown on the final play of the first half of the 2009 Super Bowl is one of the most iconic in NFL history.

Harrison’s physical play at times ran him into trouble with the league office. He was fined four times during the 2010 season alone for what the NFL considered illegal or unnecessary hits. Harrison lashed out at commissioner Roger Goodell, calling him “a crook” in a 2011 magazine article.

Harrison twice left the Steelers. He signed a deal with Cincinnati in the spring of 2013 but played only sparingly, leading him to retire in the fall of 2014. It lasted all of 18 days. He returned to Pittsburgh after injuries decimated the team’s linebacker group and in his second act became a valuable leader on the field and elsewhere, often including teammates in his draining (and well-documented) offseason workout regiments in Arizona.

At a position where few last into their mid-30s, Harrison continued to thrive. He finished among the top three on the team in sacks every year from 2014-16, and his pressure forced a hold by Kansas City left tackle Eric Fisher that negated the tying two-point conversion by the Chiefs in the divisional round of the 2016 playoffs.

Harrison signed a two-year deal last spring that would have kept him in Pittsburgh through his 40th birthday. He played sparingly for much of 2017 and the Steelers granted him his release in December. The Patriots quickly scooped him up. He had two sacks in his debut with New England in the 2017 regular-season finale and added seven more tackles in the playoffs.