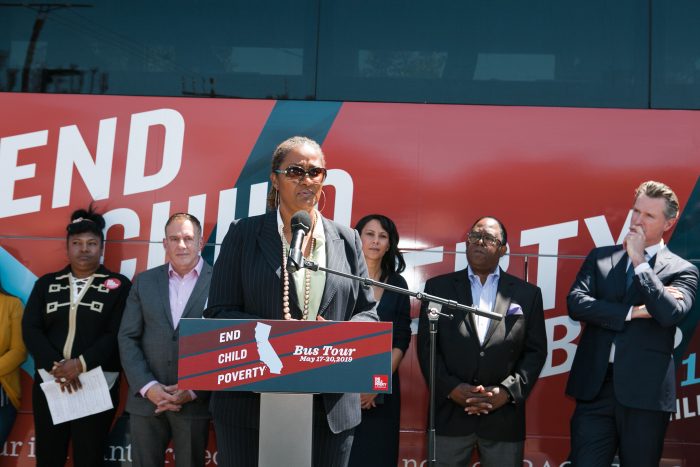 Senator Holly Mitchell was among the speakers at the End Child Poverty Bus Tour. At right are Assemblymember Autumn Burke, L.A. County Supervisor Mark Ridley-Thomas and Gov. Gavin Newsom, who all delivered remarks during the event held at St. John’s Well Child and Family Center on May 17. (Modern Romance Photography)

Political heavyweights united on May 17 to tackle a serious topic – eliminating poverty among youth and families in California.

St. John’s Well Child and Family Center hosted the rally at its facility near 58th St. and Vermont Ave. in South L.A. More than 300 people were on hand to welcome Governor Gavin Newsom, Sen. Holly Mitchell, Assemblymember Autumn Burke and L.A. County Supervisor Mark Ridley-Thomas, who all expressed their support for the campaign.

Citing the alarming statistics, Ridley-Thomas said, “Child poverty is a fiscal and moral crisis that challenges the values, the ideals, and the ethos of this very nation. California has the highest child poverty rate in the nation and nearly 20 percent of the 7.5 million residents of this state who suffer from poverty are children.”

Noting that many poor children lack permanent dwellings, he added, “We need to fight homelessness at every juncture. That is our challenge, that is our charge and we cannot back away from it. The children are ours and we are here to protect them. We need to lift our hearts to end child poverty!”

Burke was also adamant about the importance of ending child poverty and recalled her legislative efforts to highlight the critical issue. Her bill, AB 1520 or the Lifting Children and Families Out of Poverty Act, called for the state legislature to commit to reducing child poverty by 50 percent over 20 years.

To reach that goal, AB 1520 offered a range of recommendations such as a targeted child tax credit to support the basic necessities of daily living, a Cal WORKS safety net grant to bring families receiving Cal WORKS to 50% of the federal poverty line (deep poverty), expansion of the California Earned Income Tax Credit, guaranteed access to early care and education for impoverished youth up to age 8, and voluntary home visiting programs to support families with young children.

“California families living in deep poverty have to make sacrifices on even the basic necessities and these are working families – mothers and fathers that are working two and three jobs and still struggling,” said Burke.

“I am so thankful that the governor has committed to expand the California Earned Income Tax Credit, part of the $3.4 billion investment to end deep child poverty, and that the budget has been revised. Cash infusion for children would have long term benefits like better high school graduation and college entrance rates, significant increase in adult workforce participation and higher lifetime earnings,” she said.

Mitchell, long known for her work in support of children and women, urged the crowd to make a personal commitment to ending child poverty. “We are now poised with a governor who is going to tap into our resources to create services and resources that are important to you. But we have to make this quest, this fight, very personal because that’s the only way we win,” she insisted.

“I challenge everyone to determine when you decided that children shouldn’t get do-overs. We have a unique opportunity. We have a governor, a healthy general fund and elected leaders who are all poised to end child poverty.”

Vowing to make that mission a reality, Newsom said that California now has an opportunity to improve the future for the state’s children who live below or near the poverty rate. His revised budget includes record investments to address deep child poverty. Also, several pieces of legislation and budget proposals have been introduced to carry out the End Child Poverty Plan.

“We finally have a plan. We have a framework and now we’re debating the ‘how’ business – the practical application of our collective ideals, implementing this plan in a strategic and nuanced way, tripling the amount of money for children under the age of six in EITC – taking the budget from $400 million to $4.2 billion in a calendar year,” said the governor.

“We also recognize that it’s just a down payment. We need to do so much more. We’re got to build a sustainable mindset, being on a journey together with our ideals. Let’s make not only this state proud, let’s make America proud,” Newsom said.