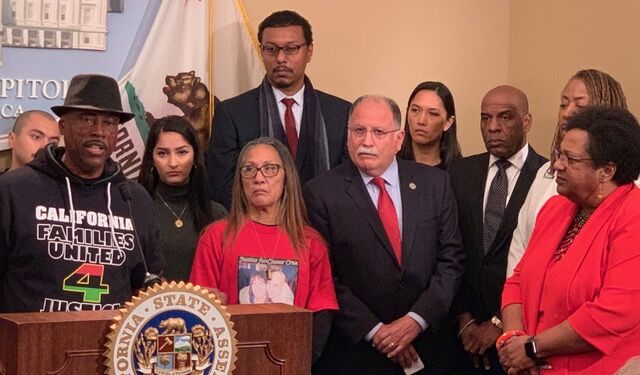 Cephus “Uncle Bobby” Johnson speaks at the press conference about the murder of his nephew, Oscar Grant, who was shot dead at a San Francisco-area train station in 2009. He is surrounded by bill supporters including Assemblyman Jose Medina, Assemblymember Dr. Shirley Weber and Senators Holly Mitchell and Steven Bradford. (Courtesy Photo)

Assembly Bill 392, “The California Act to Save Lives,” will restrict officers from using deadly force only when faced with bodily harm. Officers could also use deadly force to save a life.

Police killings continue to be a significant problem in California. According to the Department of Justice figures, California police killed 162 people in 2017, and half of them were unarmed. Cities such as Bakersfield, Stockton, Santa Ana, Long Beach, and San Bernardino ranked in the top 15 when it came to nationwide police killings.

“AB 392 will include effective police best practices to reduce civilian deaths without compromising officer or community safety,” said Weber. “We are aligning California law with the recommendations of policing experts and scholars, the Obama Administration Department of Justice and the California Attorney General’s office.”

Weber filed a similar bill last year, but it failed to move forward. However, Weber hasn’t given up on her quest to hold officers accountable.

Assemblymember Kevin McCarty (D-Sacramento), a co-sponsor of the bill, said the current law is outdated.

He added that the proposed law is pertinent as the city of Sacramento is currently negotiating a settlement with the family of Stephon Clark, who filed a $20 million wrongful death lawsuit.  Clark was shot dead in his grandparents’ backyard within minutes of officers arriving on the scene.

Another person present during Weber’s press conference was Cephus “Uncle Bobby” Johnson. His nephew, Oscar Grant, was shot dead at a San Francisco-area train station in 2009. He was restrained and complying with police when Bay Area Rapid Transport Officer Johannes Mehserle claimed he mistook his gun for his taser and shot Grant in the back at point-blank range. Mehserle served less than two years in jail after being found guilty of involuntary manslaughter. (Grant’s story was memorialized in the film “Fruitvale Station,” which was directed by Ryan Coogler, who also helmed “Black Panther.”)

“If de-escalation tactics had been used, Oscar Grant would be alive today,” said Johnson.

“We have to find balance within our communities that build trust and respect in order for law enforcement to effectively do their jobs, while at the same time ensuring the best possible outcomes during serious use of force events,” said David Swing, president of the California Police Chiefs Association. “This measure protects our communities through comprehensive policy focused on doing just that.”