‘New Orleans Queen of Creole Cuisine’ Passes Away at Age 96 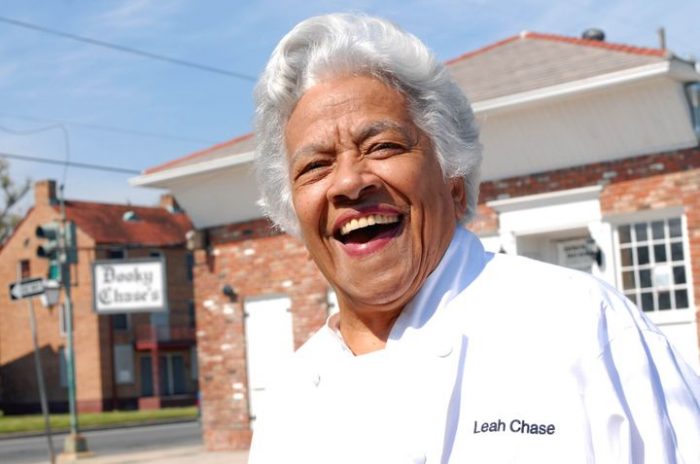 “Life is about listening, learning and never giving up. As long as you’re here on earth, you’re here for a purpose and it’s not about you, it’s about what you can do to better the world you live in. And that’s why I’m here, to help someone else up.”

The world recently lost the “Queen of Creole Cuisine” but you will find that she, like many other great people, have left little golden nuggets of wisdom for all of us.

Growing up during the Jim Crow era prevented her from continuing her education, which led to her moving to New Orleans to finish high school, living with her aunt.

“I grew up in a small town across the lake, and [at the time] there were no high schools for Blacks to go to and my dad insisted that we attend Catholic school,” said Chase. “I was taught by The Holy Family Nuns, who also taught Danny Bakewell Sr.’s mother—we both went to the same school, St. Mary’s Academy.

“I graduated high school when I was 16-years-old but there was no work for me at the time so I had to go back home. I came back to New Orleans when I was 18-years-old and I’ve been working in food service ever since.”

Chase worked as a waitress in the French Quarter, in a segregated city, where White people dined in fancy restaurants. She’s made history in her own right, one being the first woman to mark the racehorse board for a local bookie, and two, managing two amateur boxers, but it was waiting tables that was her true joy.

“I love people and I love serving people,” she said during a 2015 interview with The Associated Press.

“It’s fun for me to serve people because sometimes people will come in and they’re tired, and just a little plate of food will make people happy.”

In 1946, she married the owner of a street corner sandwich and lottery ticket stand, Edgar “Dooky” Chase Jr. and their union gave them four children. The family restaurant had been open for five years, but Chase wanted to bring a fine dining experience to the Black community much like what she observed in the Quarter.

As she introduced silverware, tablecloths and Creole dishes, history was being made as her vision brought the white-tablecloth restaurant experience to Black patrons. Chase broke the segregation laws by seating White and Black customers within her restaurant and putting Southern Louisiana Creole cuisine on the map.

Dooky Chase’s became a place where tourists, athletes, musicians, entertainers, civil rights leaders, and even presidents of all races could all agree on the jambalaya and other creole favorites. The restaurant holds a pivotal place in history in being a gathering place during the Civil Rights Movement, when interracial groups publicly met to discuss strategies. Chase shared some of her feelings about that time and importance youth play in bringing about change. 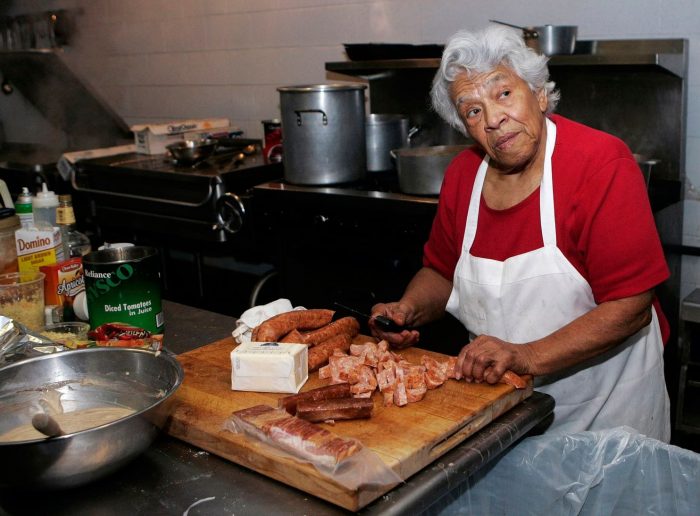 “We had good leaders like Thurgood Marshall, A. P. Tureaud and Dutch Morial but they didn’t want to offend people,” said Chase. “We as Black people were taught to respect others no matter what; we were taught to be respectful and to do our part in making lives nice but that wasn’t going to open any doors.”

She continued in the interview, “So here comes all these young people with CORE and SNC, they weren’t ready either but sometimes you do things that you’re not ready for but you do it and get the work done; that’s what these Freedom Riders did [and] people my age didn’t understand the movement.

“We couldn’t imagine our children going to jail but they were willing to do that to make the changes that helped us all. People my age should have gotten on that band wagon and supported them a little bit better than we did, but we were afraid for them.

“They were young and fearless and that’s what young people do—they take chances.”

Sybil Morial was an old friend of Chase, having eaten at Dooky Chase’s many times, where she was courted by her late husband, Ernest “Dutch” Morial, the city’s first Black mayor. Marshall and other lawyers would work with Morial’s husband and NAACP lawyer, Tureaud, and then head to Dooky’s for a meal.

“It was a haven for them to refresh themselves with wonderful gumbo and it was a place where they could strategize after a hard day’s work,” said Morial.

During the civil rights movement, Dooky Chase’s was the hub where White and Black activists came together on issues such as voter registration drives, legal cases, etc. At the time, Chase and her husband were breaking the law by ignoring segregation laws, but amazingly, they were never bothered by the police.

Jail and arrest went hand-in-hand with being a civil rights activist but Chase wasn’t about to let people making a change go hungry behind bars. She sent food to civil rights leaders while they were in jail. At the end of the day, Chase did what she thought she had to do.

In the 90s, Chase was a daily sight at the restaurant, using a walker and greeting customers and supervising the kitchen. In the coming decade, Chase would survive Hurricane Katrina even though it devastated her restaurant in 2005, leaving 5 feet (1.5 meters) of water in the dining room for weeks. In her 80s, Chase and her husband evacuated to Birmingham, but returned and lived in a FEMA trailer next to the restaurant for months while they rebuilt. In 2016, her husband passed away, ending a marriage of seven decades.

Chase has served on the board of New Orleans Museum of Fine Arts and has lobbied for more funding for the National Endowment for the Arts. Chase was also the inspiration for Princess Tiana in Disney’s “The Princess and the Frog.” The story of an African American woman who lives in New Orleans with dreams of opening her own restaurant is based on Chase and her life. 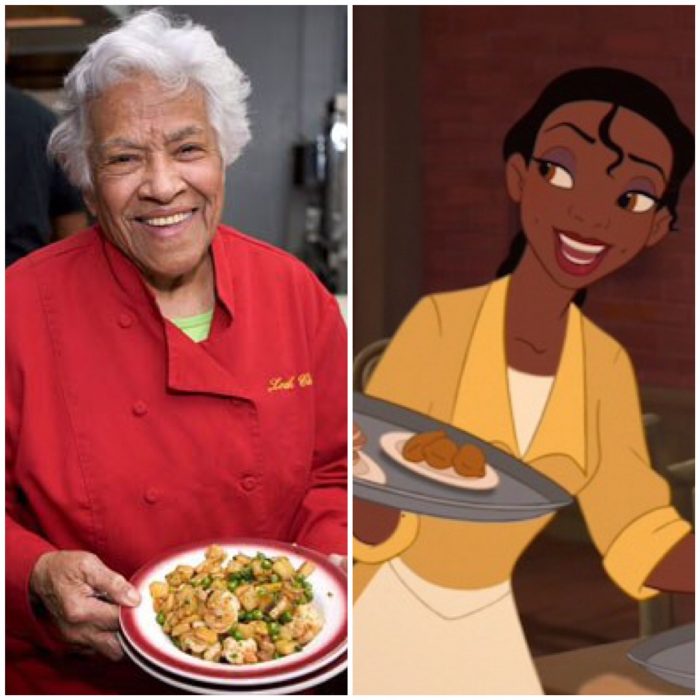 She has participated in fundraisers throughout the U.S. hosting dinners as a part of raffles where the proceeds went towards scholarships for African Americans to attend Madonna College, where she received an honorary degree. Chase has also helped raise money for food banks to distribute food to the elderly.

Chase’s family released a statement to news outlets Saturday night saying the “unwavering advocate for civil liberties” and “believer in the Spirit of New Orleans” died surrounded by family.

“Her daily joy was not simply cooking, but preparing meals to bring people together,” the statement read. “One of her most prized contributions was advocating for the Civil Rights Movement through feeding those on the front lines of the struggle for human dignity.”

Chase had a calling—to make a difference and she did it through food. It’s true that some of the best things happen while gathered around the table. Food has this unique way of opening hearts and minds, ultimately connecting people in a deeper way. Chase was aware of this and because she listened to her calling, she is now forever a centerpiece in history.

“I would advise others to keep trying, stop and listen,” said Chase.

“We have to pay attention to one another, regardless of how someone may look or act, look again. Looking at people is like looking at art.

“I may look at a painting and dislike it because I don’t understand it but then I’ll look deeper and I’ll see things better.”

“Leah Chase was one-of-a-kind and lovely lady,” said Danny J. Bakewell, Sr. “She is a New Orleans legend and activist that brought the world together through her love for cooking and connecting people of all backgrounds. My family, as well as the Sentinel and L.A. Watts Times staff send our condolences to her family and friends.

“We will continue to remember and honor her memory as the ‘Queen of Creole Cuisine.'” 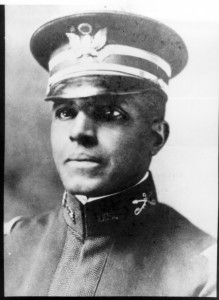 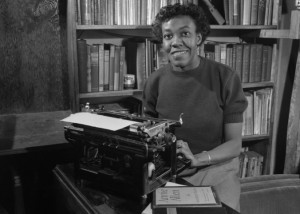