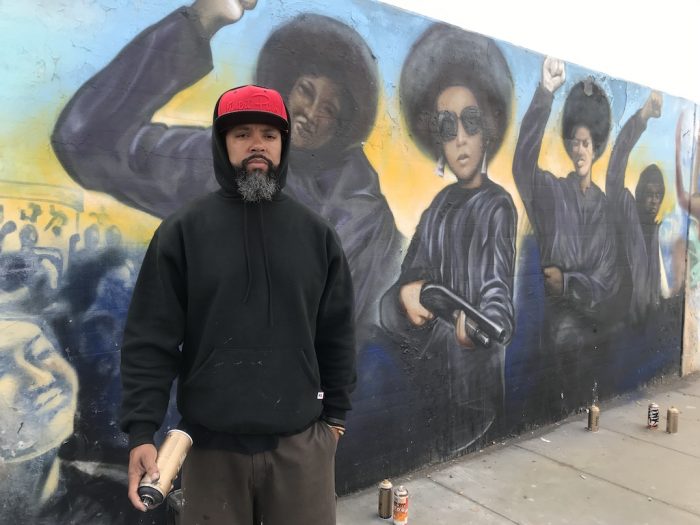 The Los Angeles Police Department is investigating the defacing of the famed “OurMighty Contribution” mural better known as the Crenshaw Wall.  Located between 52nd and 50th Streets on Crenshaw Blvd., on Thursday four swastikas appeared on the faces of the four female Black Panthers depicted in the mural. The swastikas appeared to have spray painted onto the mural.

“We will find you and we will prosecute you,” said LAPD Capt. Alex Baez.
As of Sentinel press time, there were no suspects in custody with LAPD officials saying that the vandalism appeared to be an isolated act. Investigators were canvassing the area for witnesses and possible security camera images.
“The hate crime that occurred in the Eighth District sometime on Thursday was a targeted and deliberate act to inflict fear and incite violence,” said 8th District Councilmember Marqueece Harris-Dawson.  “Fourswastikas were painted over the images of women Black Panthers on the historic Crenshaw Wall, a two-block-long work of art in the heart of the Crenshaw community. This is yet another example of dangerous, racist sentiment and actions that are beginning to characterize this period of time, and we are not immune to it in Los Angeles.” 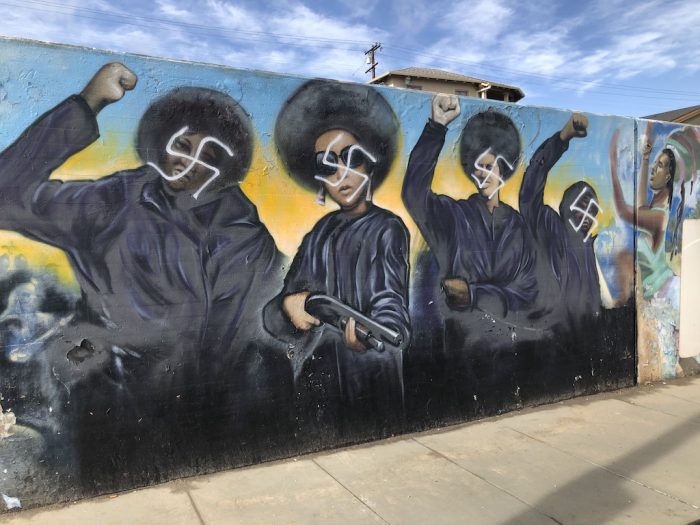 Harris-Dawson continued,“I am working directly with LAPD to ensure that anyone caught will be punished to the full extent of the law.  LAPD will determine if there is evidence that this is the hate crime that it appears to be. The Crenshaw Wall is a beloved cultural anchor of our community. It is also a centerpiece of our Destination Crenshaw project, which will elevate the African American history and culture of this community. City funds have been allocated for an overdue restoration of this historic piece of public art, and local artists have immediately responded this morning to begin removal of the swastikas in a way that minimizes harm to the artwork.”
Enkone Goodlow, the Los Angeles-based artist who painted the portion of the mural with the four Black Panthers, immediately fixed the mural when he learned swastikas has been painted across the faces of the Black Panthers.
Goodlow, 45, told local media that he used a photo of former Black Panther Party leader Kathleen Cleaver, which he had torn out from a library book more than 20 years ago, as inspiration for the mural of the four female Black Panthers.
“When I first found out I had a feeling of frustration more than anything,” said Goodlow.“Why is it that only Black people have to go through this?  That we can’t even have our own murals or monuments featuring the greatness of our people. Other races can have even there racists monuments of confederate leaders but we can’t have our mural of soldiers of peace who were known for protecting the community from tiereney. It made me just want to do something.”
Speaking from her home in Atlanta, Kathleen Cleaver said,“I really don’t think this is a sentiment that’s widespread in L.A.  It’s probably some people who are young and very White racist oriented who choose to use that powerful image to make a statement but they’re too chicken to identify who they are. It’s an overt expression of racists who don’t want to be identified.  They want to be secret and nasty and ugly.” 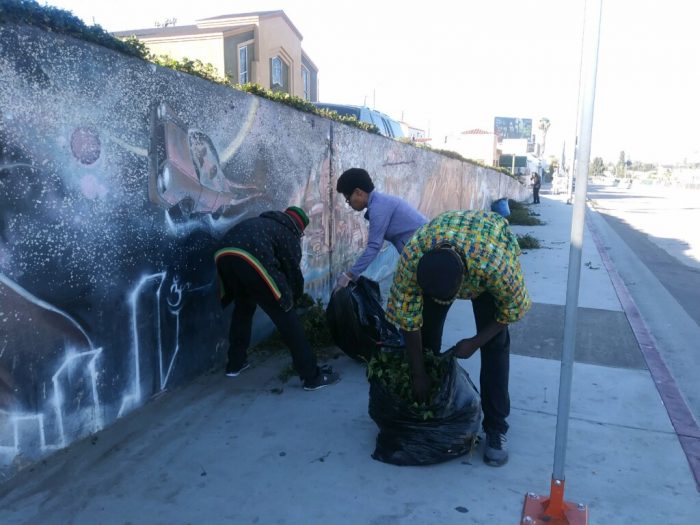 The LAPD and Councilmember Marqueece Harris-Dawson will hold a community meeting to give an update on the investigation of the vandalization of the mural on Fri., Dec. 7 at 6:30 p.m. at the Kaiser Permanente Baldwin Hills Community Room located at 3782 Martin Luther King Jr. Blvd. in Los Angeles. (courtesy photo)

On Sunday, members of the Africa Town Coalition removed weeds, debris and trash that were covering up portions of the two-block long mural.
“We came out to secure and clean up the wall because it’s been neglected by the city for too long,” said Billion with the Coalition.  “So we’ll be out here everyday and night until cameras are put up.”
Gregory Everett, the mural’s curator and director of the hit documentary “41stand Central: The Untold Story of the Los Angeles Black Panther” added,“This hurts me deeply. Not only the hate crime itself but also the fact that none of the black entertainers, film and television producers, or sports figures have reached out to me or our organization. I haven’t seen them keeping the story alive on social media, they haven’t offered a donation, nothing. But it’s not too late, hopefully someone will reach out.  That mural has been in a whole lot of movies and music videos. It’s a part of our history…”
In 2002, without any financial support or permission from the city, twelve artists who were also members of a graffiti artist collective known as“RockingThe Nation,” turned the 787 feet long, 10 feet high, 7,880 square foot wall on Crenshaw Blvd. into a Black History timeline. The mural was entitled,“OurMighty Contribution.”
For nearly 18 years, the mural has remained relatively untouched by taggers and members of local gangs in the area.
Once news broke of swastikas appearing on the faces of Black Panthers it was only a matter of hours before it went viral on social media.
ADVERTISEMENT
ADVERTISEMENT
Categories: Crenshaw & Around | Local | News | Political
Tags: Africa Town Coalition | Councilmember Marqueece Harris-Dawson | Crenshaw mural vandalized | Crenshaw Wall | Jasmyne A. Cannick | Kaiser Permanente Baldwin Hills | LAPD Capt. Alex Baez | Mural artist Enkone Goodlow | Swastikas Painted on Crenshaw Mural