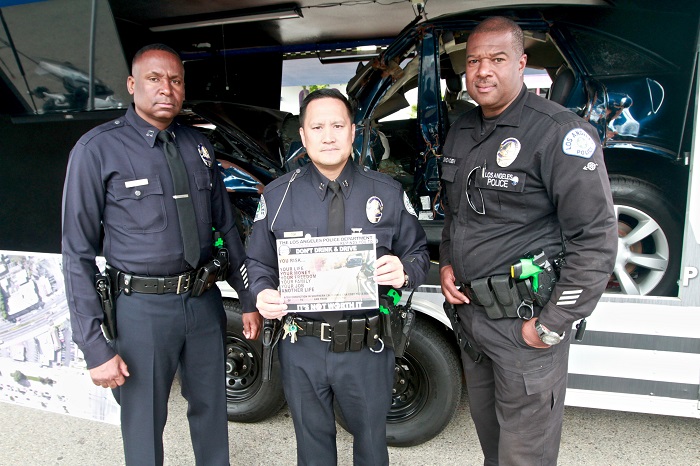 On Friday morning, May 26, the Los Angeles Police Department held a press conference on Crenshaw Boulevard to address the ongoing issues of street cruising and drunk driving during the Memorial holiday weekend. LAPD officers cautioned drivers to not drink and drive and to be aware of law enforcement patrolling for street racers.

Captain I, Darnell Davenport, Commanding Officer of Southwest Police Division discussed the heightened activity of cruising and the solution to dismantle it.

The Crenshaw district has always been a coveted space for cruisers to congregate over the years. Holiday weekends such as Memorial Day are no exception to the rule, attracting fellow cruisers.

The LAPD is taking action to stop street cruising on weekends and in the coming summer months.

“The purpose of the task force is to enforce all laws, to apprehend violators and ensure public safety,” said Davenport. “Other associated factors in high way cruisers are hit and runs, shots fired, street racing and a rise in crime in the area. The presence of cruising has a definite, negative effect on the ‘Quality of Life’ for those in the community who reside around the Crenshaw District. The Los Angeles Police Department reminds all motorists that driving is a privilege and not a right. All resources and measures will be utilized to ensure the safety and well-being of those community members who are negatively impacted by the Crenshaw cruisers.”

The Street Racing Task Force, made up of LAPD, CHP and Sheriff’s Department were on guard for street racers throughout the holiday weekend, patrolling “cruising” areas to ensure the safety of the public and traffic. The Task Force posted at known intersections to scare away cruisers.

“Essentially when someone decides to drink and drive, they risk their own life, loss of money, loss of freedom, loss of their family and loss of someone else’s life,” said Tom. A DUI in California can cost up to $45,000 or more.

Tom discussed the current state of L.A. motorists and drunk driving, referencing up to date stats of DUI related cases.

“We have 157 DUI related accidents in the Southwest Traffic Division, which is basically from the I-10 freeway all the way down to San Pedro. There’s been 844 DUI related traffic incidents this year to date and we’ve arrested almost 1500 people for DUIs.” 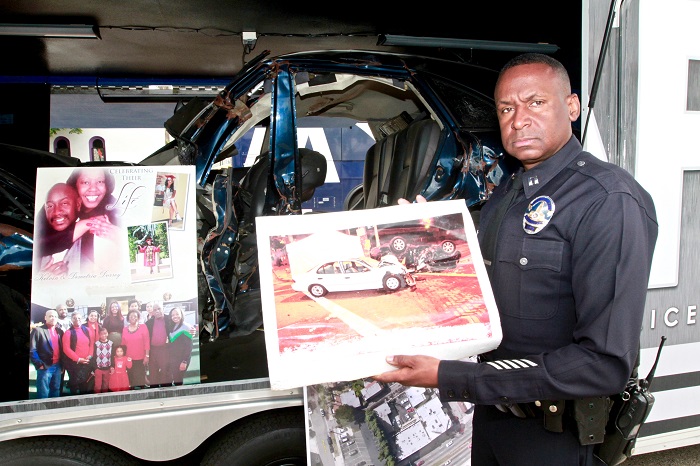 The Los Angeles Police Department showcased a real-life vehicle that was wrecked during a DUI traffic collision. On New Year’s Eve in 2010, a driver crashed and flipped the car on to its roof, killing husband and wife, Kelvin and Demetria Dorsey, parents of 5 children. The driver (Jorge Alberto Molina) of the vehicle is serving a sentence of 33 years to life in state prison. One of the daughters recently graduated from Tuskegee University and was raised by a family member.

The family member spoke at the conference stressing the outcome of driving under the influence.

“It hurts all families, those involved, having to bury or visit a love one in prison. The driver was a young man and this impacts his family also, she stated. “It never goes away to lose a love one so tragically. I’m glad to see that the vehicle is being used to stress the importance of not driving under the influence. Please don’t drink and drive, no one wins, there are no winners, everyone loses. Don’t let someone drink and drive, let’s have a safe weekend.”

“In this day in age with all of the ride sharing companies, taxis, friends and the awareness of a DUI, there is no reason at all that anyone should be driving drunk. There are too many opportunities for you to get a ride from someone,” stated Tom.

Davenport concluded the press conference stating, “we will be surrounding the Crenshaw area. If you are drinking and driving, we will find you, ticket and arrest you. We have a responsibility to protect the community.”

Police officers were on patrol this Memorial Day, looking for drunk drivers. DUI checkpoints were enforced thoughtout the holiday weekend. Davenport and Tom as well as the Los Angeles Police Department are taking street cruising and drunk driving to task to save lives and secure the safety of the Los Angeles community.