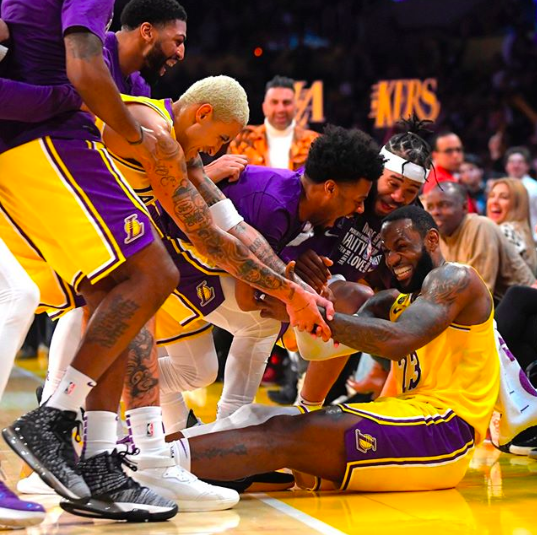 LeBron James (23) celebrates with his teammates after hitting a 3-pointer in the fourth quarter of the Lakers’ win over the Spurs. (Mark J. Terrill/AP)

LeBron James fell to the ground as his teammates rushed the court and surrounded him after he nailed his fifth straight three-pointer in the fourth quarter of the Lakers resounding 129-102 win over the Spurs on Tuesday night at STAPLES Center.

”That’s what we’re all about,” James said. ”Our team, anytime anyone is having success in the game, we cheer like it’s our own. So having that camaraderie, having that brotherhood, even though they’re beating you up, it’s just a pretty cool feeling.”

“Player of the Month,” Anthony Davis said of James, who was named the NBA’s Western Conference Player of the Month earlier today. “He’s a hell of a player…He came out on fire and created that separation for us.”

Spurs’ DeMar DeRozan, a native of Los Angeles, beat the buzzer at halftime to cut the Spurs’ deficit to 10 points at halftime as they trailed the Lakers 51-41. He would lead the Spurs in scoring as he finished with 28 points to go along with nine rebounds and seven assists.

”As a competitor, it’s what you want to play against,” DeRozan commented.

”I don’t look at it like it’s being tough,” he added on playing in a back-to-back game in Los Angeles. “It’s part of the job, part of the game, and as a competitor, you want to compete against the best. You worry about the toll afterwards.”

The Lakers made a season-high 58.8 percent of their shots from the field. Davis and Kyle Kuzma each tallied 18 points on the night. An emerging statistic of Kuzma was not in the points column, but his 12 rebounds.

“He’s just had an extra pop the last few games,” Lakers coach Frank Vogel stated.” In particular, it’s showing up on the glass…He’s certainly playing with a great deal of energy.”

Vogel was also impressed with the team’s defensive effort early in the game. LaMarcus Aldridge, who is averaging 19 points a game this season, was held to just seven points by the Lakers.

Though the Lakers have seemed to have returned to some level of normalcy in just the team’s second home game since the tragic passing of Kobe Bryant, his two retired jerseys were illuminated in the rafters.

The crowd at STAPLES Center broke out into “Kobe” chants as James and Davis shot free throws in the third quarter from DeRozan’s technical foul.

The Lakers had previously dropped the last two home games to the Magic and the Trail Blazers respectively. On Thursday following the NBA Trade Deadline, the Lakers will face the visiting Houston Rockets who are currently seeded fifth in the Western Conference.