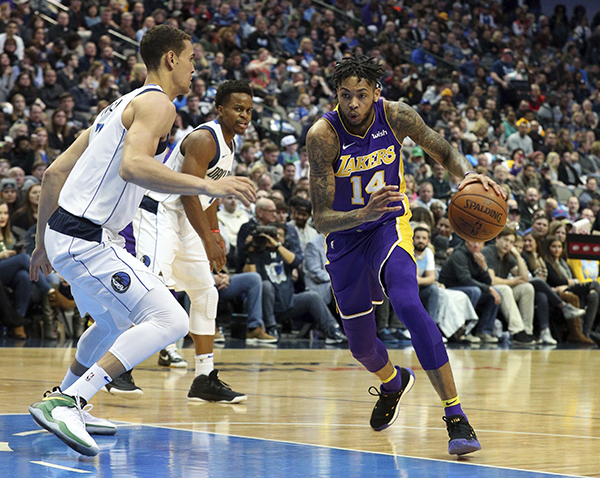 The Lakers made a strong second half effort with defeat the Dallas Mavericks 103-93. They earned the win despite giving up 17 points on 15 turnovers and shooting at 27.3 percent from behind the arc.

“I like that second half,” said forward Julius Randle. “[We] really locked up the defense for the rest of the game, so I’m proud of that.”

“[Lopez] and [Randle] give us a huge advantage down low and when we can play inside out,” said head coach Luke Walton. “We’re a better shooting team [and] we’re more dangerous than when we just move the ball around the perimeter.”

Lonzo Ball was ruled out of the game with a left knee contusion after playing for 24 minutes, he scored eight points and made five assists.

“I just got kneed in the back kind of on a back screen,” Ball said. “I think I should be okay.”

Forward Brandon Ingram returned to the starting lineup after recovering from his groin injury. He contributed 13 points and four assists in 23 minutes.

“I was anxious to get out there,” Ingram said. “I feel good physically.”

The second quarter started with forward Travis Wear scoring for the Lakers, tying the teams at 35 points. Guard Alex Caruso blocked one of forward Doug McDermott’s shots. Yet the Lakers could only get a three-point lead over Dallas.

Although they made four turnovers, Dallas would only lose one point due to their mistakes. The Mavericks thwarted the Lakers with their double-team defense. The battle stayed close with six lead changes and seven ties. At halftime, the Mavericks were up 56-55.

In the first four minutes of the second half, Dallas established a seven-point lead. Nowitzki and Barnes made shots from the perimeter. Lopez blocked a shot by Smith Jr., but Dallas kept landing baskets. The Los Angeles deficit fluctuated from 1 point to 10.

Barnes made a three-pointer, giving Dallas a 13-point lead, but the Mavericks stopped scoring for three minutes. Los Angeles used fast break points to score 10 points within one regulated minute. However, the Lakers kept fouling Dallas, a free throw from forward Maxi Kleber tied the game at 81 points.

“I think that the first half, we didn’t really do a good job of bringing energy and defending,” said forward Kyle Kuzma. “We picked it up in the second half and that really helped us.”

The Lakers went on a 7-2 run in the fourth quarter. Although forward Johnathan Motley rallied for Dallas, shots by Randle and Kuzma would fall, giving the Lakers a 10-point lead.

“We played some of our young guys, gave them some experience in an amazing atmosphere,” said Nowitzki. “Every young player needs to experience this. They played some of their starters late. There was a period where we just couldn’t score anymore.”

The Lakers return to the Staples Center on March 30 against Milwaukee Bucks at 7:30P.M.