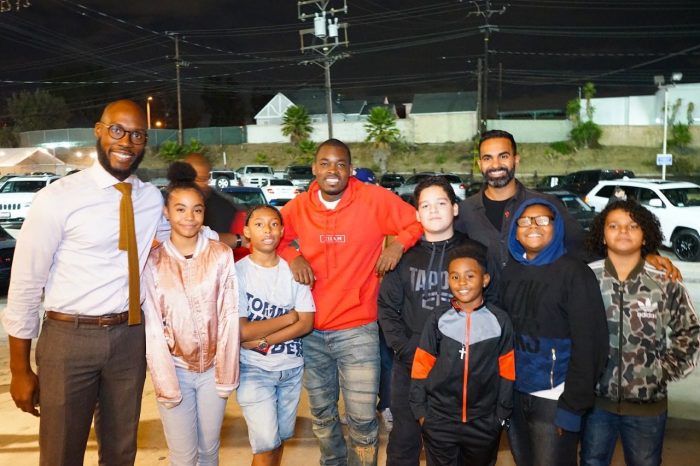 On the eve of Thanksgiving, Lakers co-owner Jesse Buss hosted an enchanted Thanksgiving dinner with celebrity servers at Hilltop Coffee + Kitchen for South Los Angeles students and their families.

“It means everything to me, having my dad [Jerry Buss] as the father figure he was, he taught me always to help your community as much as possible,” said Buss.

“Our kids have to see success in order to know what it takes to get there, so having them show up so our kids see a pathway through their hard work is awesome,” remarked TyAnthony Davis, founder of the public charter school students were invited from, Vox Collegiate School.

Since the school’s inception three short months ago, Buss has been an integral part of its prosperity. Just before school started, Buss provided backpacks and school supplies for every student to ensure each student’s preparedness for success.

“For the kids, it’s a reminder that not just their families at home and the people in the school building care about their success and are really invested in them being the future leaders of L.A,” Davis emphasized.

The school is situated in South L.A., near where Inglewood native, Beasley grew up. He shared laughs with some of the students before the meal along with his biggest pieces of advice.

“Surround yourself with the right people,” Beasley told the students. “It’s easy to get distracted, especially out here in L.A., so you have to have a good head on your shoulders, listen to your parents, and finish school.”

The parents that accompanied their children were grateful for the shared experience, “getting to hang out, meet new people, and be able to take a night off from cooking,” smiled Virginia Marin. 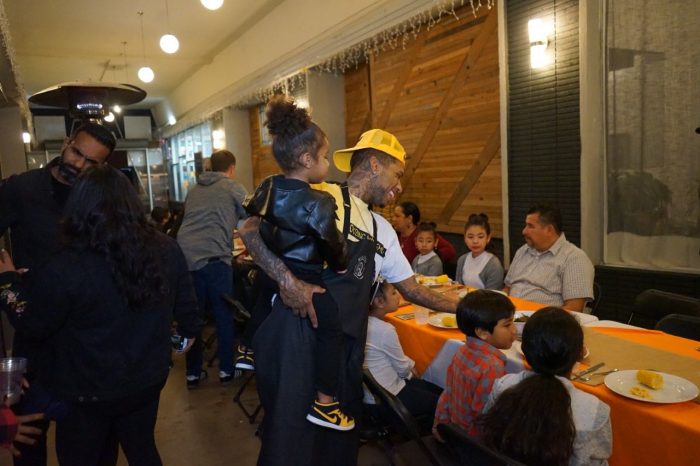 Rapper Kind Ink and his daughter help serve a free holiday meal on Thanksgiving eve to students and their families at the Hilltop Kitchen + Coffee in Los Angeles, Calif. (Lauren A. Jones/L.A. Sentinel)

Both Vox Collegiate school and where the dinner was hosted, at Hilltop Kitchen + Coffee, share a common vision of establishing quality education, food and safe spaces in the South L.A. community.

“You see everybody taking their kids out of their home-schools and bussing them out to different schools,” observed Marin. “The school means a lot because one it’s small, and they pay attention to the kids, and it’s close to home.”

Hill-Top Kitchen + Coffee, which also opened three months ago, ensures healthy and fresh food options to the community. This event, in particular, was a part of the #Lunchbag initiative started by Hilltop Kitchen + Coffee co-founder, Ajay Relan. The newly opened daytime cafe hosts the #Lunchbag event at the end of every month where members in the local community gather and prepare nearly 1,500 meals to pass out to homeless people around the city. Through social media, that movement has now grown to over 150 cities all over the world according to Relan.

“I think the theme is just gratitude year-round,” Relan reflected.

Buss was eager to get involved in the #Lunchbag movement and is looking forward to continuing his charitable efforts. Relan was one of the first people Buss met when he moved to Los Angeles 12 years ago to begin working for the Lakers.

Giving back was instilled in Buss from an early age by his father, the legendary Lakers owner Jerry Buss. He remembered his father once described his relationship with Los Angeles as ‘soulmates.’

“He really did love this city and everybody that lives here and all Laker fans around the world,” Buss noted. “He always taught us to help those in need, spreading love and kindness every single day not just during the holidays or Thanksgiving.”

Whether it is providing a meal, a safe space, or a quality education each of the participants in the evening is helping to positively impact the Los Angeles community.