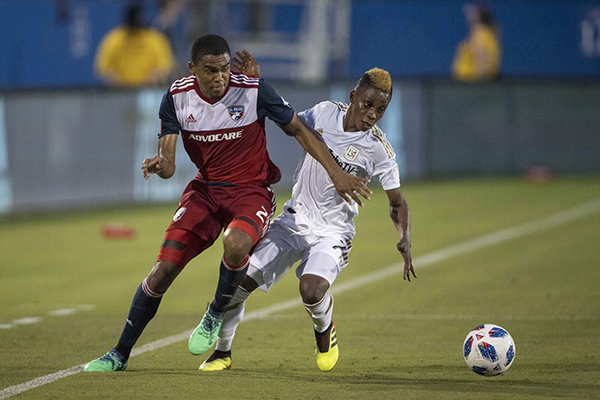 On Saturday, June 2, the Los Angeles Football Club (LAFC) was hosted by FC Dallas down in Frisco, Texas. LAFC were without their star player and talisman, Carlos Vela, who is currently in preparations for playing in the World Cup in Russia with the Mexican National Team. They were also without the defensive prowess of Laurent Ciman, who has since been placed on the Belgium National Teams stand-by list should one of the Belgians on the final 23 roster pick up an injury. It would be a test proven too difficult on this occasion, as they fell to FC Dallas 2-1.

The match was relatively tame for the first 20 minutes or so, with neither side able to create any decent scoring chances. However, in the 25th minute, FC Dallas’ Reggie Cannon had a right footed shot from the right side of the box blocked and deflected favorably into the path of his teammate Reto Ziegler, who finished the ball off with his head into the net giving Dallas a 1-0 lead.

The rest of the half became increasingly choppy, as the heat seemed to take its toll on players from both teams, and in the 31st minute the referee called for a hydration break.

The 36th minute proved a contentious one as LAFC’s Eduard Atuesta was found by Mark-Anthony Kaye who then blasted a right footed shot from outside the box but ended up going high and wide to the right. Just moments later, FC Dallas’ Maximiliano Urruti was picked out in wide open space by Santiago Mosquera who proceeded to find acres of space for himself but was denied heroically by LAFC keeper Tyler Miller, conceding the corner kick.

From the corner, FC Dallas nearly doubled their lead, as Matt Hedges connected well with his corner kick to direct a header into the lower left hand portion of the net, but once again Tyler Miller with a heroic effort kept the deficit for LAFC at one.

FC Dallas heavily dominated the remainder of the first half, with one attempt on goal coming after another. LAFC keeper Tyler Miller was called upon time and time again to come up with full-stretch saves to keep his team in the game. Amazingly, FC Dallas were held at one when halftime arrived.

The second half saw FC Dallas start right where they left off in the first, dominating the attacking essence of the game. FC Dallas’ Maximiliano Urruti nearly scored in the 48th minute with a quick turn and shot that hit the woodwork, to the relief of Tyler Miller and the LAFC defense.

Just two minutes later in the 50th however, FC Dallas managed to break down the LAFC defense with ease as FC Dallas’ Ryan Hollingshead was given far too much space to run with the ball as he weaved his way through the LAFC’s final third. He eventually found his teammate Roland Lamah, who was able to capitalize on LAFC’s shoddy defense and convincingly finished the ball in the back of the net to give FC Dallas a comfortable 2-0 lead.

Now down by two goals, LAFC began their attacking press with more fervor. In the 61st minute, LAFC midfielder Benny Feilhaber found newcomer Adama Diomande in the box, who was then able to blast the ball by FC Dallas’ keeper to cut the deficit back to one goal at 2-1.

It would prove to be a task to great for LAFC to overcome, however, as they became increasingly frustrated with the lack of possession and attacking chances. In the 88th minute, LAFC defender Jordan Harvey, who was already on a yellow card penalty, committed a hard challenge against FC Dallas’ Jacori Hayes. The referee, with no hesitation, went to his pocket and showed the second yellow to Harvey sending him off the field for the final minutes of the match.

LAFC clearly missed their star forward, Vela, and center-back, Ciman, and it became more apparent as the match progressed. The World Cup begins on June 14th and goes for an entire month. LAFC will need to regroup and find new leadership amongst the youngsters who are undoubtedly talented but lacking in primetime experience. If the “friendly” match against Borussia Dortmund a few weeks ago is any indication of the raw capability of the LAFC squad, it should not be too much of a challenge to produce quality football against their opponents.