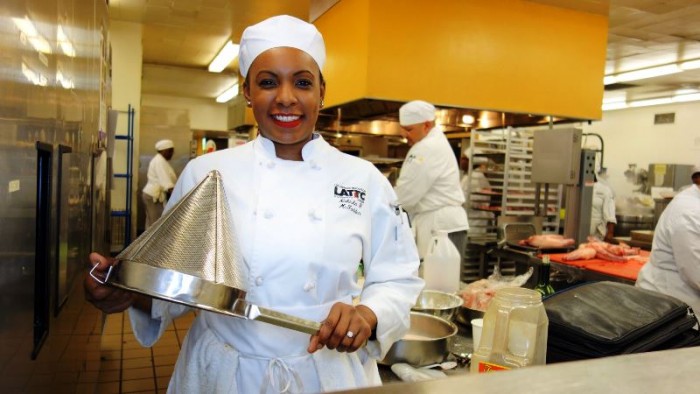 The students graduating from Los Angeles Community College District schools this week represent the myriad of reasons that make a community college education not just invaluable, but literally a life-changing experience. They include a 53-year-old single mother, a Belizean culinary arts student and a former corrections officer who grew tired of grooming co-workers for jobs he couldn’t have.

“As a defensive tactics instructor,” Terrence Williams explains, “I was training people who were being promoted but I was always passed over because I didn’t have a degree.”

Williams, who turns 49 this month, was driving home from work two years ago when he spotted balloons floating above a festive party and decided to check it out. It was Orientation Day at West LA College.

“I walked around for a while and I was stopped by one of the guys from Project LEARN, a program designed to help black males be successful at math and English. They helped me register for school.”

“I received free tutoring on all levels of math and English,” he says. “Even though a lot of my classes were online, I maintained a 3.8 grade point average.” Project LEARN helped him secure a Presidential Scholarship to California State University, Dominguez Hills; a full scholarship which will cover room, board and books.

“Paying $46 a credit is one thing, but paying $200 for a single physiology textbook is the reason lots of single mothers drop out of school. The cost of diapers takes precedence.”

Allen, also completing her studies at West LA College, is one of only six students who have been accepted to the UCLA Harbor Medical Center School of Radiologic Science.

Her journey may well have been as tough as it gets. Shortly after the birth of her second child, Allen, who is now 53 years old, found herself out of work as an architect. Six months after filing for divorce she was on social services.

“It was a very humiliating experience for someone who made a lot of money over the last 15 years,” she recalls, “but while I was at Cedars Sinai Hospital giving birth to my second child, I had an epiphany.” She decided to study occupational therapy and use her architecture skills to design homes for geriatric patients and people suffering from strokes.

“That was the plan,” she says, “but USC didn’t accept me because they were comparing my grade point average from 20 years ago with a typical 20-year-old college student. Ageism was definitely a part of it. I understand it but I don’t accept it.”

She soon discovered CalWORKs, a welfare program that gives cash aid and services to eligible needy California families. “I was hysterical. I spent days crying in [the CalWORKs] office. They said let’s get online and see what else you can do.”

That online search led her to West LA College. When she leaves school with an associate’s degree in Radiologic Science this week, she says the memory of her experience there will stay with her for life.

“I couldn’t understand why younger students were sailing through courses that I couldn’t grasp but the tutors at the resource center helped pull me through. Thanks to them, I didn’t fail a single class. I can’t wait to finish UCLA Harbor because I see so many possibilities once I graduate.”

As far as Nakisha “Nikki” McFadden is concerned, community college is a financial investment that offers an incomparable bang for the buck. She is graduating from the Los Angeles Trade-Technical College’s Culinary School, the longest-running culinary arts program in the nation. “I went to the Art Institute [before I] went to Trade-Tech, and this school is worth ten times the [tuition].”

“For instance,” she says, “if I don’t have access to a chinois hat, this triangle-shaped strainer for vegetables, I have to find the next best tool. This school gives you those real-world lessons if you want to be a chef.”

As former corrections officer Williams puts it, “community college is almost like a training ground for [further studies] and for life, but you have to get involved and give yourself a chance.”