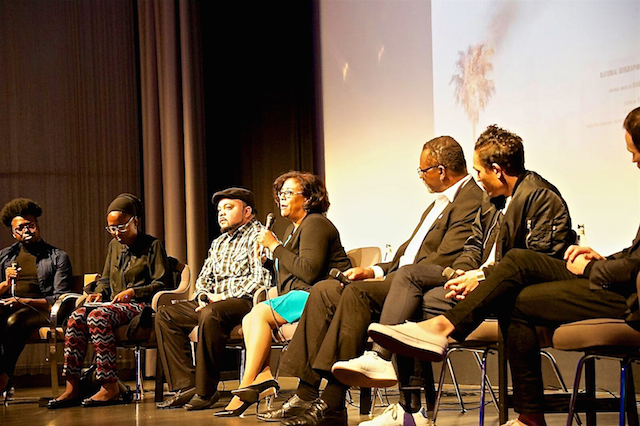 There’s a lot to talk about when on the subject of the LA Uprise in 1992; his being its 25th Anniversary and past events repeating themselves in police brutality against largely African Americans, many wonder if the past is repeating itself.

The feature-length documentary, LA 92 and the Museum of Tolerance, along with the National Association of Black Journalists (NABJ) hosted a screening and panel conversation of the riveting film produced by award-winning filmmakers Dan Lindsay, TJ Martin and Jonathan Chinn. LA 92 is told in news clips and summaries of journalists and newsmen and women on the ground as the 92’ unrest was in progress. Told in before and after sequence from the videotape of Rodney Kings’ infamous excessive force beating by four Los Angeles Police Department officers who were eventually acquitted of the charges to the endless rampage on the city. In shocking, realistic on the ground level transparency, the film took you there. Figuratively and literally, you were transcended to the spring of 1992 when it all went down.

In a diverse crowd, there were both reactions and expressions of dismay throughout the graphic scenes of violence and overt racism that enthralled the city.. Gasps, weeping, and frustrations were felt while our eyes were glued to the screen. It was captivating and surreal as if we were watching the present day news.

After the screening, a panel moderated by LA Times reporter Tre’Vell Anderson, conveyed the emotions of the crowd. It’s certain that not much has changed from 1992 – 2017. “LA 92 – DÉJA VU OR WORSE? THE JOURNALISTS‘ PERSPECTIVE – LOOKING BACK AND LOOKING FORWARD“

was the theme of a riveting panel covered a wide range of topics, focused primarily on whether much has changed since 1992. Panelists told where they were on those two days in 1992.  Some of the panelists were minors, and others were already working in their professions yet each expressed that the days left searing memories, many re-experienced during the screening.

“It’s difficult to sum up in a few words what we think viewers should take away from this film in this particular climate,” said Dan Lindsay, co-director, Academy Award ® winner, “Undefeated.” “We want people to feel empathy, to actually experience what happened, rather than us interpreting for people what happened. And, we want people to engage in conversation.”  TJ Martin, co-director expounded further saying, “there are a lot of parallels to what is going on today.”

Strong and lasting impressions, raw feelings and candid discussion permeated the conversation, which continued long after the panel discussion concluded, even spilling out in the parking lot.

When asked what it felt like to be a working photojournalist during that time, Kirk McKoy, the only Black L.A. Times photojournalist then and now, said, “I’ve been a war photographer, but never been one in my own home town, until 1992.”

When the topic of black female involvement started, the face of Maxine Waters was remembered as being a community leader in the film; keeping crowds calm during the unrest. “Black women have been largely left out of the conversation and yet, Black women were there, and are still here,” said Aminah Bakeer Abdul- Jabbaar, Assistant Professor, Pan African Studies Department, CSULA. “When you look at this film and see Congresswoman Maxine Waters, it’s like looking at a time capsule of how she, from the very beginning, was out in front confronting racism, inequity and injustice. She keeps fighting and advocating.”

Before closing out the night, Gilbert Johnson, from the Community Coalition said, as a community organizer, he would be remiss if he didn’t push back and underscore that some things have changed.  “Every victory that we gain that chips away at White supremacy, we have to count,” says Gilbert. “There are campaigns out there, many headed by mobilized youth, with awakened political consciousness. They are working to break institutional racism. It comes down to people power.  It won’t happen at the hands of elected officials…”

“LA 92” will be in theaters in Los Angeles, San Francisco and New York for one week, beginning November 17.