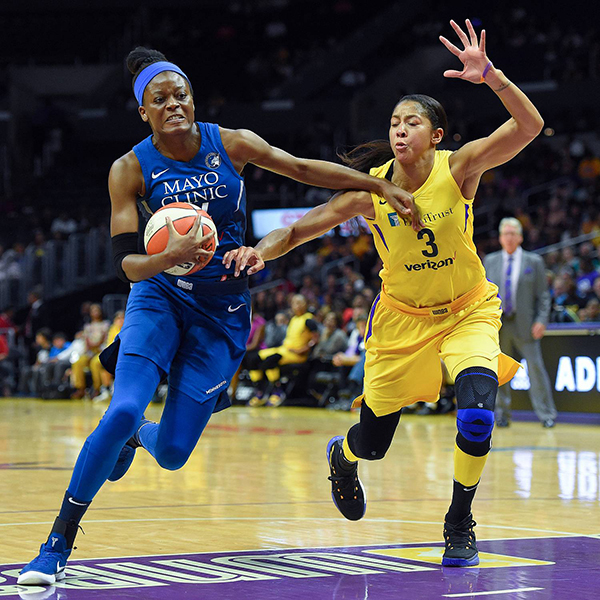 The Los Angeles Sparks (4-1) defeated the defending champion Minnesota Lynx 77-69 before a crowd of 13,500 people inside Staples Center on Sunday as four of the Sparks five starters scored in the double-digits.

“We just have to keep building, keep getting better,” Sparks’ Candace Parker said. “This is a step in the right direction for us and our goal is to get one of the top two spots, so this definitely helped us in our series with Minnesota.”

The WNBA has seen a resurgence amidst the budding rivalry between the Los Angeles Sparks and defending champion Minnesota Lynx. The two premiere franchises have faced one another in the finals for the past two years with each coming away with a WNBA championship title.

The Sparks came out to a strong start with Parker leading the charge. She ended the first half with 17 points and six rebounds. It was her first game back this season as a starter after being slowed by a minor back injury.

“It’ll take maybe a little bit of time, but I can tell there was a big improvement from last Sunday to this Sunday,” Sparks head coach Brian Agler said. “I thought she did a lot of good things.”

She finished with 19 points, 10 rebounds and three assists.

The Lynx managed to keep it close through two quarters. Despite a strong defensive first half for the Sparks, at the half, the Lynx trailed by just two points 40-38. The Sparks forced 13 turnovers in the first half alone.

“We’re not one of the bigger teams in the league, so we have to our quickness and our positioning and anticipation to create some opportunities at the offensive end,” said Agler.

The reigning defensive player of the year Sparks forward Alana Beard, had arguably the toughest assignment of the day guarding Maya Moore.

“I can’t say enough about the efforts that Alana does as an individual assignment on somebody,” Agler commented. “Maya Moore is as good as there is and Alana just makes it difficult.”

Moore finished with 18 points, while Sylvia Fowles contributed 14 points and eight rebounds for the Lynx.

“The way that coach lays it out is that we play each team three or four times and it’s our goal to win each series,” said Beard who added nine points to the Sparks victory.

The Sparks’ leading scorer Nneka Ogwumike had just two points at halftime, but after earning a technical foul in the third quarter, she ended with 12 points.  A 14-3 run in the third quarter gave the Sparks a ten point advantage. Meanwhile, the Lynx shot 4 for 16 from the field. The Los Angeles basketball team would lead by as much as 12 points in the game.

The Sparks handed the Lynx their fourth straight loss and now sit atop the Western Conference. Next, the Sparks will face the Seattle Storm on Thursday led by veteran Sue Bird at Staples Center.