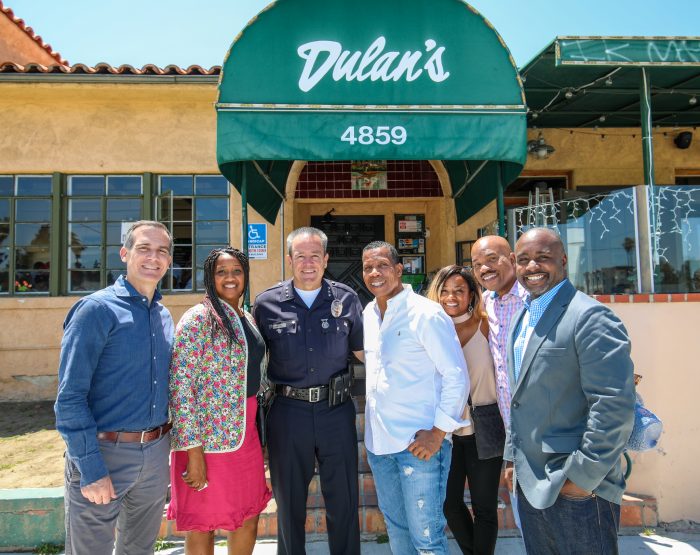 Last week, Los Angeles Mayor Eric Garcetti chose Los Angeles Police Department Assistant Chief Michel Moore as the department’s new chief to replace retiring officer Charlie Beck. Moore has been with the department since 1981. However, Sunday, June 10, was the first time he stepped out with Garcetti to tour the city of South L.A. after being chosen as the new LAPD chief.

What’s a tour without food? One thing that makes South L.A. a unique community is the food combined with its richness of Black culture. Dulan’s Soul Food Kitchen, one of the first Black-owned private catering companies, is known to be one the perfect places to have a southern style meal while basking in Black culture. So of course Garcetti and Moore had to make this restaurant their first stop.

While there, the two met the owner of the restaurant, Greg Dulan, as well as Rev. John E. Cager III, pastor of Ward AME Church in Los Angeles and president of the Los Angeles Council of Religious Leaders and Southern California AME Ministerial Alliance; program manager of the Cecil Murray Center for Community Engagement, Rev. Najuma Smith-Pollard; and Councilman Marqueece Harris-Dawson to address the current community climate between residents of color and LAPD among other topics.

“I believe [Moore] understands the department’s history with the African American community and the high expectations for making our neighborhoods safe, while also improving relations with the community,” said Harris-Dawson.

“He has demonstrated respect for South Los Angeles, and he wants to continue to transform the department to do the same. I shared with him the importance of supporting and expanding community based policing, such as the Community Safety Partnership, which is saving lives in the Harvard Park neighborhood.”

Cager stated Moore has the opportunity to shape LAPD into “the model of a 21st Century agency.”

“Our prayer is that he will transform policing in South Los Angeles so that LAPD is no longer viewed as an army of occupation and is instead seen as the protectors and servants of all of L.A.’s citizens,” he said.

Dulan stated, “How often does the mayor and the new chief of police stop by your restaurant. I spoke with Michel Moore, and he is a genuine man of God who wants to focus on improving relations between the police department and the community. The way they ate, I know they will be back. I like the new chief and I think he is an excellent choice and I look forward to working with him in any way that I can.” 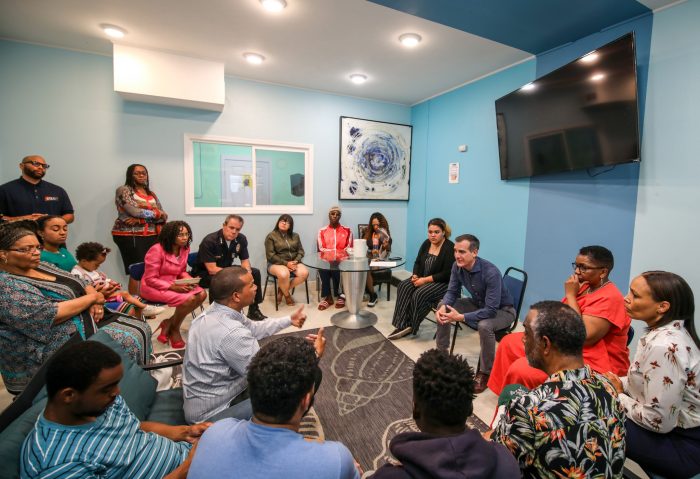 Participants had the opportunity to ask both Garcetti and Moore questions about homelessness, safety, and policing strategies. (Kristina Dixon/ L.A. Sentinel)

Los Angeles County has one of the largest homeless population counts in the nation. Since Garcetti came into office in 2013, he made the homelessness crisis a primary focus on his agenda. So it was no surprise when the mayor arranged for Moore and himself to have a public discussion with residents at the Home At Last Community Development Corporation (housed by the Avalon Carver Community Center); a non-profit organization that provides complimentary social work services to at-risk youth in South Los Angeles.

During the discussion which took place at Home At Last’s youth shelter, residents had the opportunity to voice their concerns and ask both Garcetti and Moore questions.

“You don’t judge a city just on its mountain peaks…we have to look at where we still have valleys. We have to talk to young people who still have hopes but can’t find a place to live. Folks that are in tents around all the neighborhoods of our city and figure out how public safety is something that is really a partnership, responsibility of all of us,” said Garcetti.

“I chose Michel Moore to be our next police chief because he was the person who could implement that next chapter. Not only of LAPD’s history but also of our city’s history and for me that starts in South L.A.”

Home At Last Administrative Director, Gina Dapremont, who attended the discussion had this to say about the event.

“I was very impressed with the appearance. The fact that the mayor and the new police chief took the time to come out and first hand observe and take note to the actual participants in the program, and address the needs and desires,” said Dapremont. She goes on to say that she plans to work with Moore and Garcetti in the future to determine ways in which they can better assist the organization.

Councilman Curren Price who was also at the discussion shared his thoughts on Garcetti’s pick for LAPD chief.

“The next chief of police must be out there making a genuine effort to gain the public’s trust and strengthening relationships with our residents. I have a lot of respect for Michel Moore’s decades-long experience and I look forward to working with the chief closely and learning more about his vision and goals for the future.” 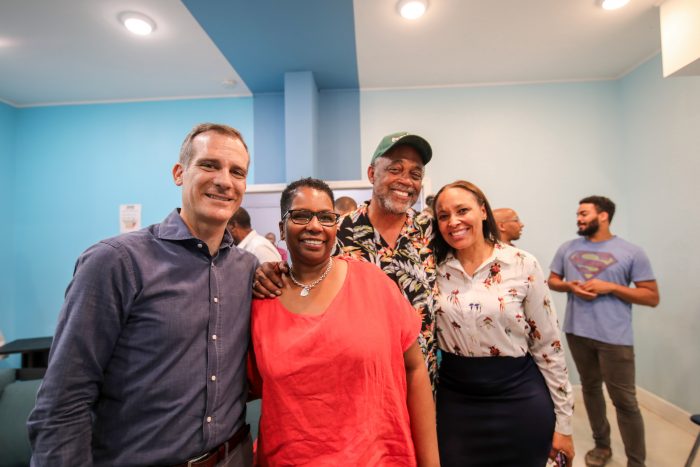 Garcetti and Moore made their final stop with a behind the scenes exclusive interview with Los Angeles Sentinel Managing Editor Brandon Brooks at the Avalon Carver Community Center. During the interview, Moore stated that the goal of coming to South L.A. Sunday was to show by both his words and actions, how important this part of the community is to him as a police chief and Angeleno.

“Los Angeles is made up of so many rich communities and so many of those communities have history and not all that history with the police has been good,” said Moore.

“I am committed to working in each of those communities, by being a police chief who listens and hears and does everything possible to address the concerns and grievances that communities may have and also to represent my officers. The men and women of this department are great and tremendous people who come to work each day to do good work and to do service and make sacrifice.”

Moore continued, the interview by saying he gets to take the messages he heard from the discussion on Sunday back to his fellow officers. Moving forward, Moore plans to bring a different tone to his department and the city by deepening community trust and providing officers with better resources.

“I intend to continue amplifying our engagement and presence in the houses of faith, on the street, our efforts to have coffee with a cop…so that we are visible, we are accessible and we are responsive,” said Moore.

He continued the interview by stating that he expects that same from LAPD and he knows that the men and women on the force are ready to make a change.