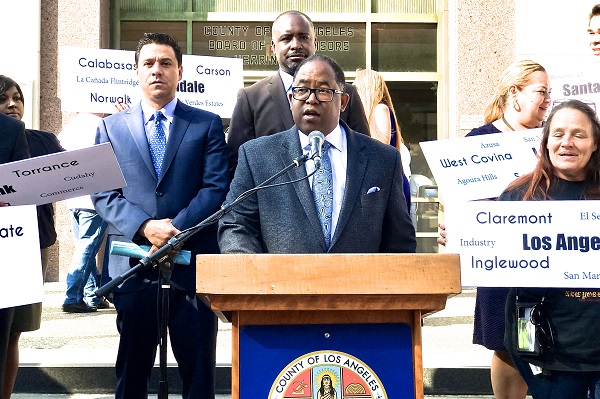 Los Angeles County Board Supervisor Chairman Mark Ridley-Thomas outlined the path for progress to ensure permanent housing for those who are experiencing homelessness, during a press conference on Tuesday, August 22.

At issue is voters overwhelming approval of Measure H in March, which makes way for joint county-city efforts to provide supportive services to compliment rental assistance.  Specifically, it authorizes a 0.25 percent county sales tax for 10 years to fund homeless services and prevention to the tune of about $350 million.

“Today we celebrate progress,” said Ridley-Thomas, flanked by non-profit leaders, activists, politicians, and advocates.  He called homelessness the defining civic issue of today, as well as a civil and human rights issue.  The voters wanted action, he said. 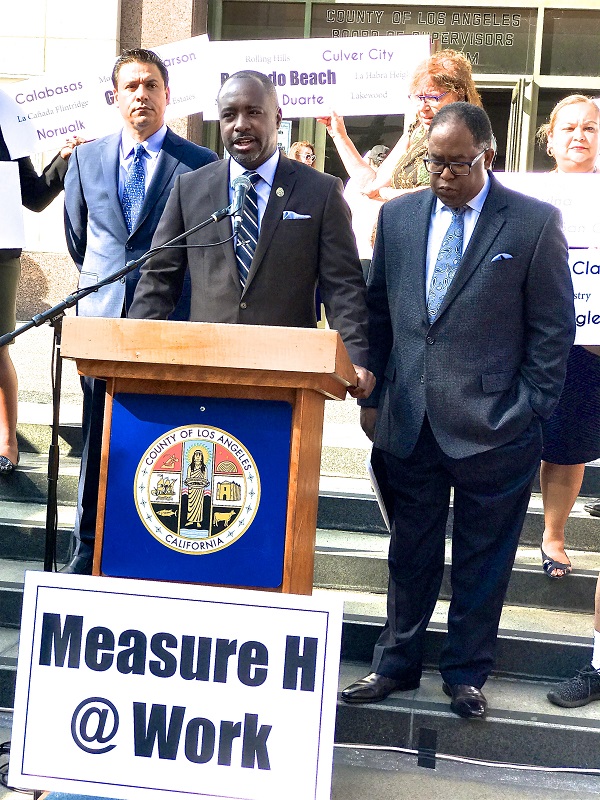 L.A. City Councilman Marqueece Harris-Dawson speaks on the City’s role during press conference on plans to push ahead with Measure H and efforts to eradicate homelessness in L.A. Count. (Photo Charlene Muhammad)

“It’s fair to say that we then had a mandate.  The county of L.A. will leave no stone unturned to identify solutions and fund innovations – not one size fits all – but tailored to each person’s needs and strengths in order to restore dignity and purpose to their lives,” Ridley-Thomas stated.

Following the press conference, the Board of Supervisors discussed how the county is partnering with cities across the region and providing essential support services to make sure formerly homeless persons will thrive in permanent supportive housing, Ridley-Thomas informed.

The county plans to accomplish its collaborative mission with community stakeholders, which include homeowners, landlords, cities, and housing authorities.

Ridley-Thomas gave a special shout out to the cities who have already stepped up:  Burbank, Glendale, Long Beach, Pasadena, Pomona, Redondo Beach, and Los Angeles.

“We’re coming out of the box strong to say that 2,000 plus persons will be aided by what we are doing today,” Ridley-Thomas said of the rental assistance vouchers already committed. 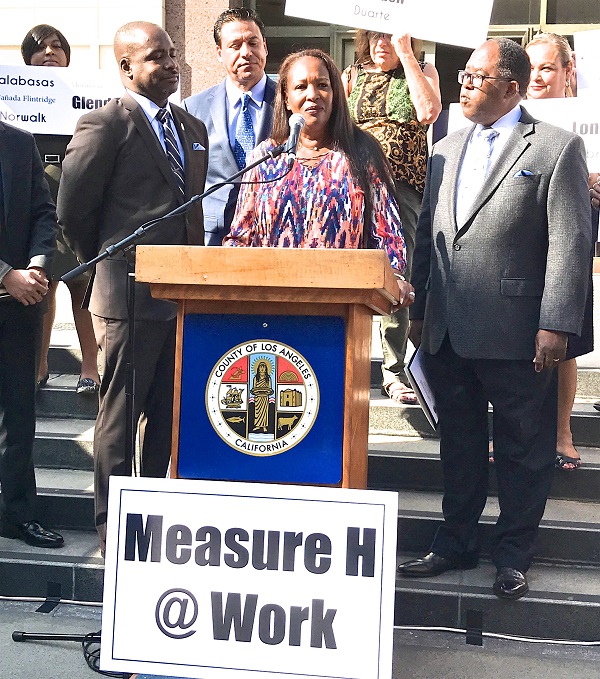 Ko emphasized that L.A.’s plan was not a pilot project.  He also expressed excitement that it would reach all homeless neighbors across the county by extending through 87 other cities.

Stevens’ story represents the work before them, Ko said.

For 21 years, she experienced homelessness.  She was housed twice, and couldn’t keep them, she shared.

“This is what makes supportive services so important throughout the County of Los Angeles and all of its 88 cities. As an adult, it was guilt and shame that kept me from asking for the necessary help that I needed,” Stevens stated.

She said that housing is only the beginning to the end of homelessness, and urged law makers to meet homeless neighbors where they are.

Stevens also applauded the cities who have stepped up, because she knows first-hand that supportive services work.

“This is an opportunity for us, for those of us who experience homelessness, or those of us who are going to receive these services today to grow, to be productive members of society,” Steven said, as she thanked Ridley-Thomas and all involved in the effort.

As chair of the city of L.A.’s Homelessness and Poverty Committee, I was very excited to join in the announcement, Harris-Dawson said.

“Homelessness, among many other things, tends not to recognize municipal boundaries, and so, it requires all of us from neighborhood, block-to-block, city-to-city, council-to-council, mayor-to-mayor, to work together to end homelessness in our time,” Harris-Dawson stated.