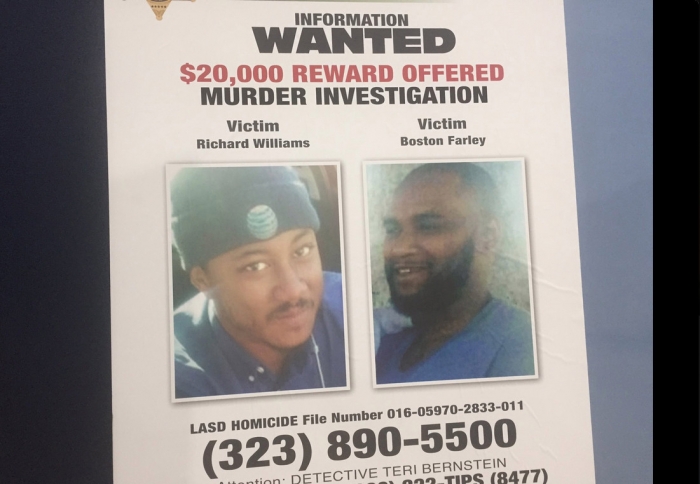 Supervisor Mark Ridley-Thomas recommended renewing a $10,000 reward in the Compton shooting, which was set to expire this week.

About 9 p.m. on May 15, 2016, 24-year-old Richard Williams was driving out of a 76 gas station in the 1200 block of South Wilmington Avenue with two friends — 23-year-old Boston Farley and 26-year-old Brandon Upchurch – – when someone fired into their vehicle.

Williams was struck by multiple rounds and died at the scene. Farley died at St. Francis Medical Center.

Upchurch, who escaped injury, told investigators that as Williams drove from the parking lot, an “armed male assailant was waiting on the sidewalk and began shooting into the vehicle,” according to the Sheriff’s Information Bureau. “The suspect then got into a waiting white utility truck, which fled northbound on Wilmington Avenue and out of view.”

Sheriff’s officials said the victims, both residents of Compton, were not gang members, but their assailants could be. The suspects’ truck was described as a white Chevrolet or GMC utility service truck with ladder racks and built-in side tool boxes.

Both victims were fathers of year-old sons and Williams, who worked as a communications company installer, was engaged to be married.