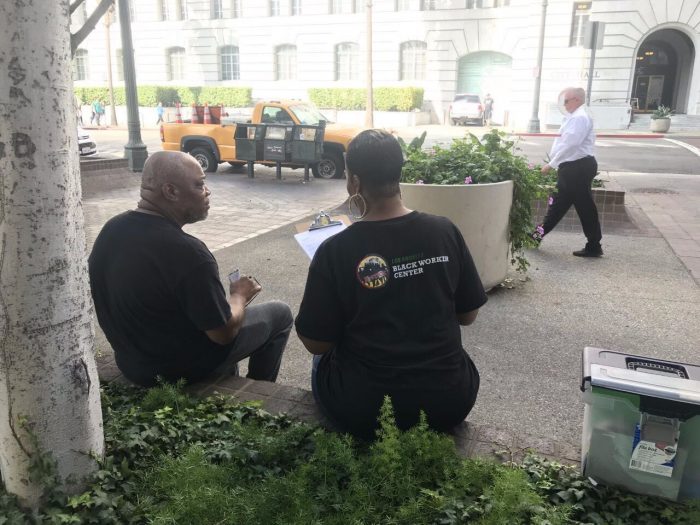 For millions of Black families in the U.S., working in the public sector has long provided a dependable pathway to the middle class. Approximately one in five Black adults work in such fields as the government, teaching school, delivering mail, driving buses and working at hospitals. Blacks are about 30 percent more likely to have a public sector job than non-Hispanic Whites, and twice as likely as Hispanics.

“I’ve always understood anecdotally that public sector jobs are meaningful to the Black community. But after meeting them face-to-face, it became clear how critical public sector jobs have been for Black people, their families and even their extended family members,” said Malcolm Harris, Senior Lead Organizer for the Los Angeles Black Worker Center. “From conducting this survey, we learned how much Black workers – most of them women – have held on to their public sector jobs for practically their entire careers.”

Two Black Worker Center canvassers – Mesha Butler and Daniel Fuller – who’ve combed local business districts to query public sector workers were equally moved by the experience. “Most of the people we surveyed talked about how their jobs kept a roof over their heads and put food on the table,” said Butler, who was recently hired to work as a painter at the new Rams Stadium in Inglewood.

Fuller, a community organizer, said that the survey assignment was an eye opener. “It made me understand how one person can use his or her public sector job and its benefits to take care of an entire generation in one family.”

One public sector worker whose job deeply impacted her family is Tiffany Hall. When the City of Los Angeles hired Hall as a 911 Operator nearly a decade ago, she said it literally became a life saver. “When I first got hired, I had just given birth to my oldest child and my husband got laid off the day before,” said Hall, now a mother of two who has since been promoted as a 911 Instructor, making $90,000 annually. “My husband was diagnosed with kidney disease in 2011, but my job provides us with the health insurance we need. And we’ve become debt free, all on one income.”

The Los Angeles Black Worker Center began planning the survey endeavor after last year’s U.S. Supreme Court ruling of Janus versus American Federation of State, County and Municipal Employees (AFSCME). This ruling weakens unions by eliminating their right to collect fair share contributions from working people, including those who work in the public sector. As a result, unions would have less power to collectively represent the interests of public sector workers.

What makes this ruling particularly distressing for Black workers is that public sector jobs have traditionally served as the economic cornerstone for African American communities throughout the country. If the Janus ruling prevails, it will jeopardize the viability of the very unions that have long fought for the rights of Black workers and services to African American communities.

“Public sector jobs provide livable wages for Black workers in our communities, and unions protect them in their workplace. Unions support public officials who understand the rights of working families and how important they are for our city,” said Carmen Hayes-Walker, President of the AFSCME. “The Janus decision eroded those protections for our workers, especially Black workers who aren’t completely aware of the full impact of how unions protect them.”

Considering the impact of the Janus ruling, Los Angeles Black Worker Center organizers have reflected on the infamous question raised by President Trump while stumping for Black votes in 2016: “What do you have to lose?” The Black Worker Center’s resounding answer is everything that African American elders have fought for.

“The Janus case aims at weakening the ability of unions to negotiate strong contracts that benefit workers, especially Black workers who rely on public sector jobs as well as the unions that represent them,” said Lola Smallwood Cuevas, Executive Director of the Los Angeles Black Worker Center, who noted that this case is one of a long list of civil and human rights rollbacks by the Trump administration. “When unions are faced with limited resources, it silences the collective voice of all working people. When workers do well, our communities do well. So this survey is one way that we can ensure that their voice is being heard.”

Smallwood Cuevas added that the remaining middle-class Black neighborhoods of Los Angeles have been built and maintained by the economic stability of public sector work. “Our forefathers fought for equal opportunity hiring within the public sector, and it has been Black workers who have continued to make government jobs a standard. Losing ground in the public sector for our community means all workers lose ground.”

The Los Angeles Black Worker Center not only conducted the survey to build a local movement against the Janus ruling, but it also served as a call to action to the City of Los Angeles. The Black Worker Center is calling for the City to make good on its promise to restore 5,000 public sector jobs that were lost during the recession. If restored, it is anticipated that many of these jobs will be filled by Black workers. The Black Worker Center also is partnering with union and community allies to pass a Civil and Human Rights Ordinance for the City of Los Angeles to more deeply protect workers against discrimination. Within weeks, the Los Angeles City Council is expected to vote on the Ordinance, which was co-authored by Councilmembers Gil Cedillo and Herb Wesson.

The results of the survey will be announced through a report released in January 2019. The Los Angeles Black Worker Center will utilize the report to reveal how much Black workers rely on union representation to give them access to better compensation, more training and workplace protections. 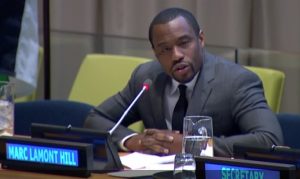