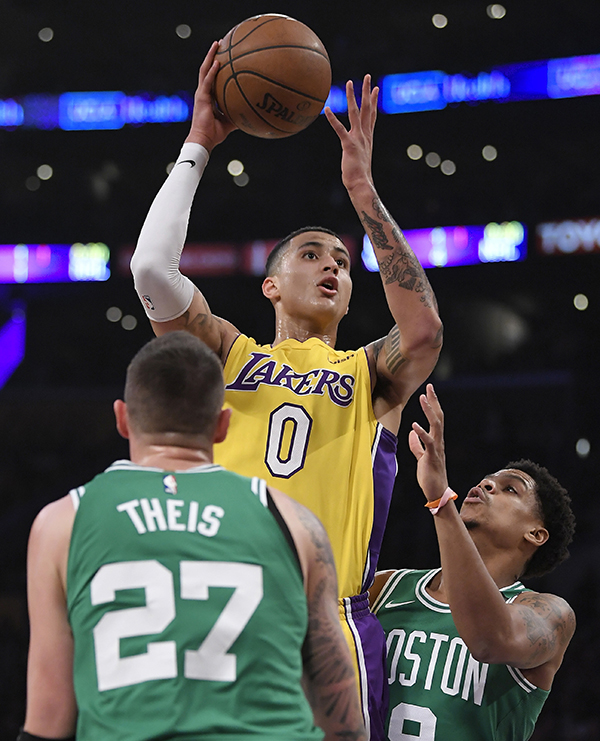 The Lakers snuck out a win over their historic rivals the Boston Celtics 108-107 on Tuesday night. The win put Boston in a four-game slump on the road. Being Lakers fan in his formative years, guard Julius Randle understood the significance of the matchup.

“For me, I always get up for this game,” Randle said. “The rivalry puts so much more intensity on the game.”

Although the Lakers secured a win over one of the top defenses in the league, head coach Luke Walton was not pleased with the team’s free throws. In the fourth quarter, Los Angeles was 7 of 17 from the charity stripe.

“[I was] frustrated that we didn’t make free throws,” he said. “I know we haven’t made them, but we have guys that I trust at the line that need to step up and knock those down.”

Kuzma scored 17 points through the final act alone, his scoring was a crucial part of their win. The Lakers were down by six and rookie guard Alex Caruso missed two free throws. Soon after, Kuzma launched two three-pointers and the Lakers were within one point of the Celtics.

“We let our guy Kuzma get going and in this league, when you let a guy get hype—it’s hard to contain, it’s hard to stop him,” said Celtics guard Marcus Smart.

The Utah standout then attacked the paint to dish the ball to Nance Jr. for a dunk, electrifying the crowd and regaining the lead.

“I saw [Daniel Theis] come over to try to block and the ball was already low,” Kuzma said about the play. “It was just the right pass to make.”

The Lakers offensive effort took time to rev up in the contest. Although they turned the ball over twice, Los Angeles came out sluggish in the first quarter; they missed 11 shots in the first six minutes.

The Lakers walked into the second quarter in an eight-point deficit. Kuzma worked to keep the Lakers competitive scoring three-pointers. The Flint, MI native earned his first assist of the night with a behind-the-back pass to Larry Nance Jr. for a layup. 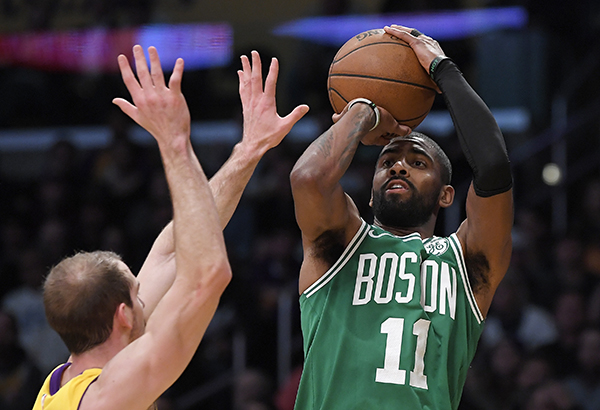 Forward Marcus Morris rebutted with three-pointers of his own, ultimately scoring 13 points and seven rebounds. Irving returned to the floor, he and Marcus Smart regulated Boston’s dominance as the Lakers struggled to make baskets. The Lakers lagged 45-53 at halftime.

The Celtics’ offense froze early in the third quarter, allowing the Lakers to push up to a two-point deficit. Contributions from guard Kentavious Caldwell-Pope, center Brook Lopez and Randle, kept the Lakers competitive.

The Lakers had problems guarding Irving and Smart, the reserve guard finished the night with 22 points. Los Angeles rallied with close ranged shots, scoring 18 points in the paint during the third quarter. After nine lead changes and six ties, the Lakers had outscored the Celtics 76-74 at the end of the period.

With 4:47 left in the game, Kuzma gave the Lakers a six-point advantage. Yet Irving and guard Terry Rozier fought back offensively. Free throws became critical in the final seconds: Clarkson went to the line twice and shoot 4 of 4, yet guard Josh Hart went 0 of 2. Yet, Los Angeles gave Boston their 14th loss.

The Lakers will go on a five-game road trip, starting with the Chicago Bulls on Friday, January 26 at 5:00P.M.