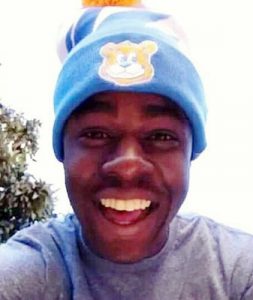 Lionel Gibson, Jr. was gunned down by six officers on May 7. Courtesy Photo

Family, friends, even strangers fed up with what they assert is unjustified police violence, held a rally at the Long Beach Police Department (LBPD) on July 30 as part of their quest for justice for Lionel Gibson, Jr.

The 21-year-old was gunned down by six officers on May 7, and his mother Alice Corley said she still has not heard from LBPD as to why deadly force was used when officers confronted him.

“I don’t have a grandchild by him. He was just learning to become a young man, and so unfortunately, I’ll never kiss a grandchild,” Ms. Corley lamented.

She began crying even more when she thought about his future. “He didn’t have any children. It’s so painful right now. Even trying to take care of this, there are days I have to scoot myself out of the bed,” Ms. Corley continued. She has other children, so she has to get up, she said.

“I just can’t let it be another person shot without doing something about it. I was never an activist. I don’t know anything about activist, but I’ve been activated by this situation,” Ms. Corley added.

She said her son complied with everything officers told him to do, and that his hands were in the air when he was shot nine times, six of them kill shots.

“I think that’s excessive. I’m asking for a different and a more peaceful way to approach your citizens. If you protect and serve, then you should be protecting. He didn’t get protected, and he absolutely wasn’t served. He was no threat to the Long Beach Police Department, the six officers that shot at him,” she said.

Gibson was planning to start classes in the Fall to become a studio engineer. He was writing his own book about himself, sort of an urban novel, he was smart and he just wanted to be loved on, Ms. Corley stated.

According to an LBPD press release, officers responded to a 911 call claiming Gibson had an assault rifle, but turns out it was an airsoft (fake) gun. Police officials claimed the officers commanded him to put his hands up, but opened fire after he allegedly reached his hands toward the gun in his waistband.

The Gibson family’s attorney filed a wrongful death claim against the city of Long Beach on May 27, according to Ms. Corley.

“This is not over, because obviously they keep doing the same thing all around the city, and all around the state, and nationally. Something needs to be changed,” Ms. Corley said.

Adrienne Hill of Lakewood has also been activated, and it has been a long time coming, she told the Sentinel.

“I should’ve been out here long ago but especially with the dealings of the past two weeks with Anton Sterling and Philando (Castile), have brought tears to my eyes, many tears to my eyes,” she said. One day she found herself crying uncontrollably on her way to work.

“It’s needing to do my part. Telling other people what to do, and what they should do, and we need to do, I need to come out myself and be part of the movement,” Ms. Hill added.

After a brief memorial at the scene of the shooting, Gibson’s family released 21 balloons, representing the 21 years of his young life. Ms. Corley appealed, “Everybody who’s hearing my voice, please! Before it happens to you, go to your councils. Go to your mayor. This has got to stop.” 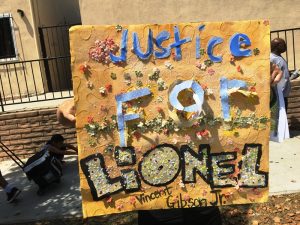 Ms. Corley, Dwayne Peay, her fiancé, activists with the S.T.O.P. Coalition, Coalition for Community Control Over Police, Black Lives Matter Long Beach, families of Donte Jordan (also killed by LBPD officers) and Manuel Diaz (killed by police in Anaheim), and supporters then marched to the LBPD to demand answers regarding his killing.

They want to know: why LBPD still has had no meaningful conversation regarding the investigation with Ms. Corley; why deadly force was used; and the names and current statuses of the officers involved in Gibson’s death.

“Hands up! Don’t Shoot,” they chanted. “You are murderous, blue shield, hide behind your wall cowards,” Ms. Corley shouted through a bull horn in front of LBPD. “Murderers, killers and cowards,” the demonstrators began chanting. “Lionel Gibson! Say his name,” they continued.

“There are no words we’re just tired of seeing ourselves dying,” said Keyanna Smith of the Coalition for Community Control of Police. She is pushing for community control over the police, because that represents sustainable power, she said.

The key is in a community team led control board, all elected, all civilian, which is controlled by the people, not merely reviewed, Ms. Smith stated.

“We want hiring and firing power. We want residency requirements, and we want to be able to determine on what grounds someone gets fired for,” she said.

If officers have been involved in more than one shooting, they should be evaluated, she insisted.
Dawn Modkins of Black Lives Matter Long Beach said while people are working to hold police accountable, they are also reimagining what they feel their own community safety needs to look like.

The S.T.O.P. Coalition, led by families of loved ones killed by law enforcement, is demanding that L.A. County and individual cities pass a comprehensive platform to address use of force. They also demand a set of policies guaranteeing rights and respect for families.

Jyra Gonzlez met Ms. Corley at other marches for victims of police shootings. “As a member of the community, I’m hurt. It bothers me that these kinds of things occur, and we should definitely get together as a whole and do something about it,” Ms. Gonzalez said.

The group of peaceful demonstrators chanted outside the LBPD, as a handful of officers from behind locked doors filmed their activities.

“You can’t hide from God,” one protestor yelled.

Some demonstrators, including a nine-year-old boy, held posters depicting Gibson’s face and other messages denouncing police brutality up to precinct windows.

One young woman in incident non-related to the demonstration, grew more distraught after police denied her access to the lobby to inquire about her brother, whom she said was missing.