Since debuting on St. Thomas,“ParadiseDiscovered: The Unbreakable Virgin Islanders,” is garnering critical-acclaim nationwide.
The film, directed by renowned Virgin Islands author and journalist Peter Bailey, captures Bailey himself and a cross-section of Virgin Islanders retelling harrowing tales of surviving hurricanes Irma and Maria.
The film is based on Bailey’s New York Times Op Ed which he wrote while building a make-shift roof after hurricane Irma destroyed his family’s home.
Now the intrepid author and journalist – a former staffer at Time and Newsweek – well-known for his“NiteCap”conversation series, is setting out on a nationwide screening tour to share what he calls“oneof the most inspiring stories in American history that mainstream media missed,” according to a news release.
“Unbreakable is the story of how we as a community gave each other light when nature and the rest of the world left us darkness,” Bailey said.
The journalist has dedicated this most recent film to his late father Joseph Bailey, who died on September 3 after a lengthy battle with Alzheimer’s.
The film made its U.S. mainland debut in October at USC’s School of Cinematic Arts in Los Angeles as part of the university’s“OurVoices” program which invites the brightest minds in filmmaking to discuss their work. 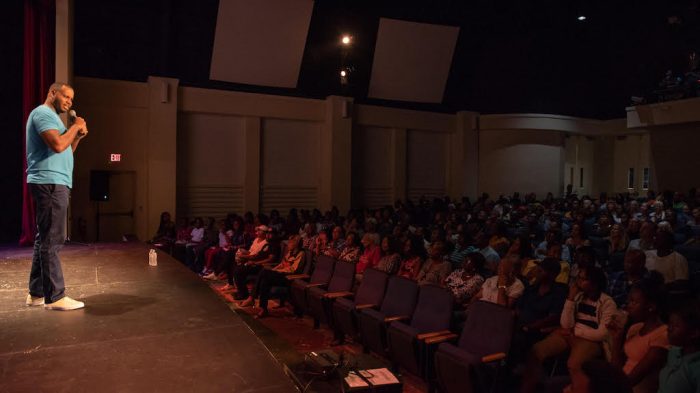 Past speakers include legendary director John Singleton and John Chu. The event marked the first time a chapter of Virgin Islands history was showcased at the nation’s most prestigious film school.
“Peter’s work is so important to the national discourse today,” said Desa Philadelphia, a journalist who heads USC’s Voices Program.“Thereshould be many rich discussions centered around the themes he explores in his work,” Philadelphia said.
“Unbreakable” most recently made its east coast debut at the University of Delaware, Bailey’s alma mater, to a packed crowd of students, professors and civic leaders.
“I laughed. I cried and identified. Someone is finally telling our story,” said an emphatic Sharifa Paul, a high school classmate of Bailey’s who drove down from Philadelphia for the event.
Others are calling the film a much-needed education.
“The film taught me a lot about U.S. citizens that I knew nothing about,” said Katherine Nails, a graduating senior who serves as managing editor of the University of Delaware’s student- run newspaper.“Youlearn that for the Virgin Islanders tragedy brought out the best in their community.”
Bailey is scheduled to return to St. Thomas on Dec. 7 for another showing of the film at the University of the Virgin Islands. Other upcoming stops on the tour include Atlanta, Los Angeles, Chicago, New York, Miami, Providence, Rhode Island and Charleston, South Carolina.
Bailey said his goal for the Paradise Discovered series is to advocate for residents of the Virgin Islands and rest of the Caribbean to be included into the nation’s cultural and political discourse. The first film from the series,“TheAnguilla Connection,” debuted in Anguilla – his mother’s homeland.
“If you close your eyes and think of the Virgin Islands you picture a beach,” Bailey said.“Thereare people on these islands. People with hopes and dreams beyond serving rum punch.”
For more information on the tour, visit www.nitecapmedia.com.
ADVERTISEMENT
Categories: National | News
Tags: hurricanes Irma and Maria | New York Times | Nitecap Media | Paradise Discovered series | Peter Bailey | Stacy M. Brown | The Anguilla Connection | The Unbreakable Virgin Islands Tour | Virgin Islands