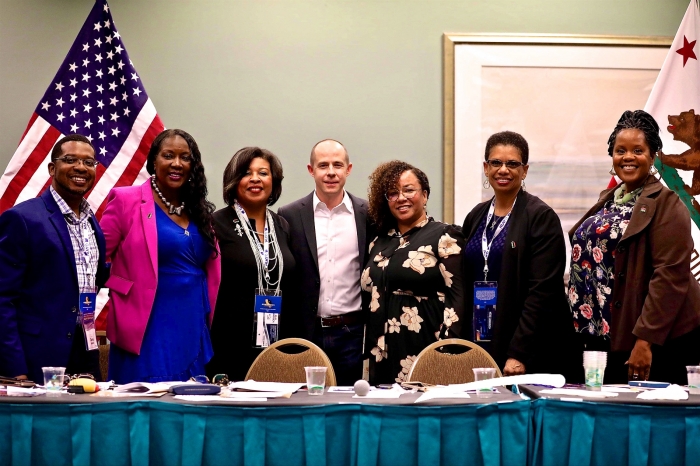 Black women, one of the most loyal and energized voting blocs in the Democratic Party, may not be getting their due yet at the national level, but if what’s happening in California with Black women Democrats, on all levels, is a sign in the tea leaves of what’s to come, then brace yourselves for a beautiful blue world of Black Women in politics.

Another well-known Black woman and politician, state Senator Holly Mitchell (D-Los Angeles), spoke to the audience in the crowded room at the swearing-in, too.

Then, Diane Becton, judge and former trial lawyer, and first Black women to be elected District Attorney in Contra Costa County in 2018, performed the swearing-in ceremony.

“Already the African American Caucus is changing this party,” said Taisha Brown, the new chair of the CDPAAC at the event. “We also got the Children’s Caucus to declare racism a public health issue for our children. We are also working with the legislative Black Caucus to turn this in to legislation.”

The other officers installed on the CDPAAC board are Kendra Lewis, vice chair, Lorrie Brown, recording secretary, and Cecile Nunley, treasurer.