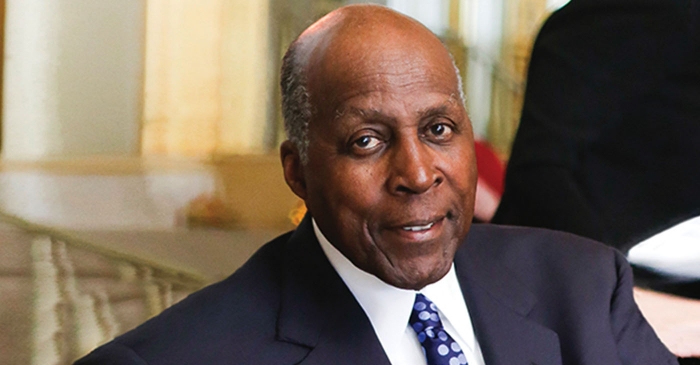 “My father passed away last night at around 10 p.m. surrounded by loved ones, his wife and daughter, by his side,” Adams noted in a statement.

NAACP President Derrick Johnson said the world lost an influential figure in the fight for civil rights and American politics.

“An icon to the world and a lifelong friend to the NAACP, his contribution to moving our society toward justice is unparalleled,” Johnson declared.

“In 2001, Jordan received the NAACP’s Spingarn Medal for a lifetime of social justice activism. His exemplary life will shine as a guiding light for all that seek truth and justice for all people.”

Added Congresswoman Karen Bass (D-Calif.): “For decades, Mr. Jordan fought for the advancement of civil rights in this country. His contributions – first challenging segregation and discrimination as an activist in the 1960s and later continuing the fight in the leadership of the NAACP, the United Negro College Fund and then as President of the National Urban League – benefited us all.”

When she was the the chairwoman , the congresswoman continued: “As Chair of the Congressional Black Caucus, I had the absolute humbled honor of meeting with Mr. Jordan multiple times to discuss the challenges of our time, but also our hope and optimism for the future. While Mr. Jordan is no longer with us, we continue this fight surrounded by thousands inspired by his work and his leadership. My thoughts are with the family of Mr. Jordan and the many friends that join me in mourning his loss.”

A lawyer and Washington power broker, Jordan was born in Atlanta on August 15, 1935.

He attended the DePauw University in Greencastle, Indiana, where he was the only African American student in his class.

According to his biography posted by The HistoryMakers, Jordan participated in the student senate at DePauw and won statewide honors in speaking competitions.

He played basketball and graduated in 1957.

In 1960, he earned a J.D. from the Howard University School of Law.

“In 1961, he helped organize the integration of the University of Georgia and personally escorted student Charlayne Hunter through a hostile White crowd,” The HistoryMakers noted.

“Over the next ten years, Jordan held various positions as a civil rights advocate. He served as the Georgia field secretary for the NAACP, director of the Voter Education Project for the Southern Regional Council, head of the United Negro College Fund, and as a delegate to President Lyndon B. Johnson’s White House Conference on Civil Rights.”

In 1971, Jordan was appointed president and CEO of the National Urban League, spearheading the organization’s growth.

After a successful recovery, in 1981, Jordan resigned from the National Urban League to work as legal counsel with the Washington, D.C. office of Akin, Gump, Strauss, Hauer, and Feld.

He also was a partner in the investment firm of Lazard Frere & Company in New York.

In 2001, Jordan published his autobiography, “Vernon Can Read!,” and authored a weekly newspaper column syndicated to more than 300 newspapers and served as a frequent television guest and commentator.

“Mourning the passage of my friend, the extraordinary Vernon Jordan,” Stacey Abrams posted on Twitter.

“He battled the demons of voter suppression and racial degradation, winning more than he lost. He brought others with him. And left a map so more could find their way. Love to his family. Travel on with God’s grace.”