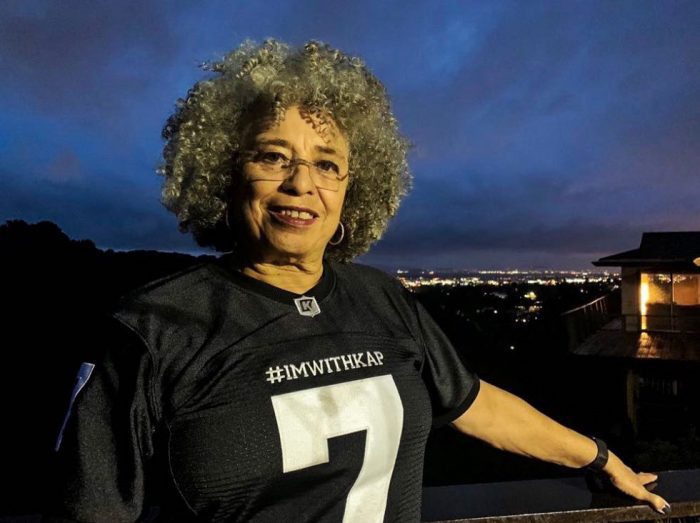 Dr. Angela Davis sports a #ImWithKap No. 7 jersey in protest of Super Bowl and in support of Colin Kaepernick. (Twitter @ImaginexJustice)

A contingent of celebrities, athletes, fans, and activists boycotted Super Bowl on Sunday, February 3, in support of former NFL quarterback, Colin Kaepernick, who has been blackballed by the league according to multiple reports.

In 2016, when Kaepernick was a quarterback for the San Francisco 49ers, he initially sat before taking a knee during the national anthem to protest racial inequality and police violence. The  31-year-old quarterback, who once led his team to a Super Bowl, has not been offered a contract to play since opting out of his contract the following season.

Kaepernick filed an official grievance against the NFL, accusing the league of collusion last year. His protests inspired others across the NFL and other U.S. professional sports to also protest during the national anthem. Since being sidelined from playing football professionally, Kaepernick has devoted his time and money to charity work.

On Sunday, #ImWithKap started trending on Twitter to show solidarity to protest Super Bowl LIII. Among the many celebrities that vowed to boycott the game were Rihanna, Ava DuVernay, Common, Dr. Angela Davis, John Carlos and Lena Waithe.

Meanwhile, filmmaker DuVernay took to Twitter to affirm, “I will not be a spectator, viewer or supporter of the #SuperBowl today in protest of the @NFL’s racist treatment of @Kaepernick7 and its ongoing disregard for the health + well-being of all its players. To watch the game is to compromise my beliefs. It’s not worth it. #ImWithKap.” 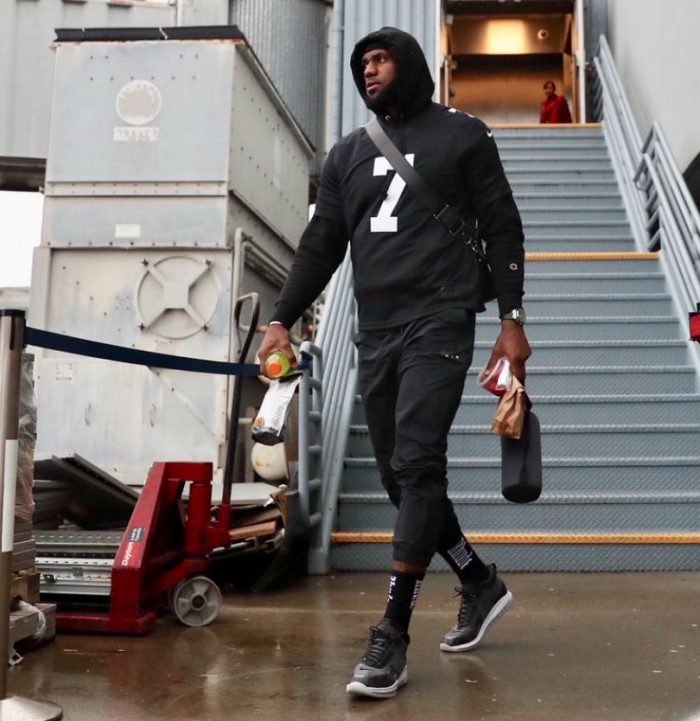 Kaepernick acknowledged the outpour of support, thanking everyone including two of the NBA’s biggest stars, LeBron James and Steph Curry, who sported a No. 7 Kaepernick jerseys over Super Bowl weekend. Kaepernick shared a photo of former Olympic athlete, John Carlos wearing a jersey with #ImWithKap written on it. Carlos is famous for one of the most iconic silent protest demonstrations that took place during the 1968 Olympic games, alongside Tommie Smith, where the pair sported black gloves and rose their fists to protest racism.

“It means the world to me to have the support of John Carlos, an icon who paved the way for myself and many others to continue to fight systemic oppression. Thank you for your sacrifice for us!” Kaepernick wrote.

When a popular Atlanta mural featuring Kaepernick was destroyed the Friday before the Super Bowl, artists around Atlanta painted eight more Kaepernick murals around the city totaling nine.

The outpouring of support for Kaepernick, in part, led to Super Bowl LIII being the lowest-rated NFL title game in a decade. According to the Washington Post, the NFL’s biggest game scored a 44.9 rating, a 5.2 percent decline since last year, making it the lowest-watched super Bowl since 2009, when the Pittsburgh Steelers faced the Arizona Cardinals.