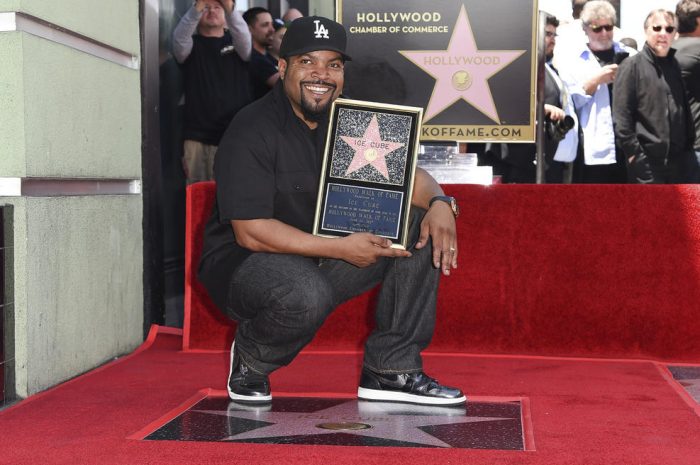 Ice Cube attends a ceremony honoring him with a star on the Hollywood Walk of Fame on Monday, June 12, 2017, in Los Angeles. (Photo by Richard Shotwell/Invision/AP)

Rapper-turned-actor and movie producer Ice Cube Monday became the latest celebrity to be added to the Hollywood Walk of Fame.

Speaking at the ceremony in front of the Musicians Institute on Hollywood Boulevard, Ice Cube gave thanks to his parents and others who played a role in his career.

“I’m so honored to be here, you know, it’s a great day,” he said. “… You know, you don’t get here by yourself. When you’re coming up doing music, movies, just trying to be creative, you never figure you’ll be on the Hollywood Walk of Fame one day. So today is not really about Ice Cube. It’s about all the people who helped me get here.”

The ceremony came three days after the release of the 25th anniversary edition of his second album “Death Certificate,” which includes three new songs. 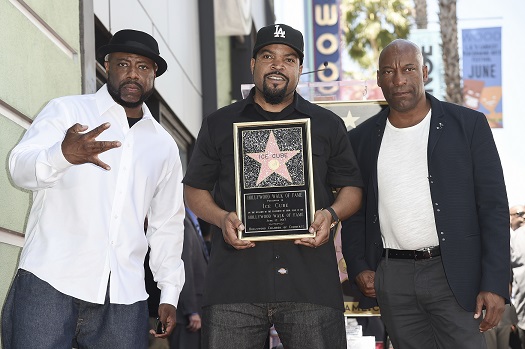 WC, from left, Ice Cube and John Singleton attend a ceremony honoring Ice Cube with a star on the Hollywood Walk of Fame on Monday, June 12, 2017, in Los Angeles. (Photo by Richard Shotwell/Invision/AP)

Ice Cube, whose birth name is O’Shea Jackson, first attracted attention as a rapper and songwriter with the West Coast gangsta rap group N.W.A. in the late 1980s, writing lyrics for its groundbreaking songs “Straight Outta Compton” and “Gangsta, Gangsta” and “Express Yourself.”

He soon left the group for a solo career, releasing his first studio album in 1990, “AmeriKKKa’s Most Wanted.”

Ice Cube, now 47, began his acting career with the 1991 film “Boyz n the Hood.” He later appeared in the “Friday,” “Barbershop,” “Are We There Yet?” and “Ride Along” franchises, which he also produced, and such films as “Three Kings.”

Ice Cube also was a producer of the 2015 N.W.A. biopic “Straight Outta Compton” and directed the 1998 film, “The Players Club.”