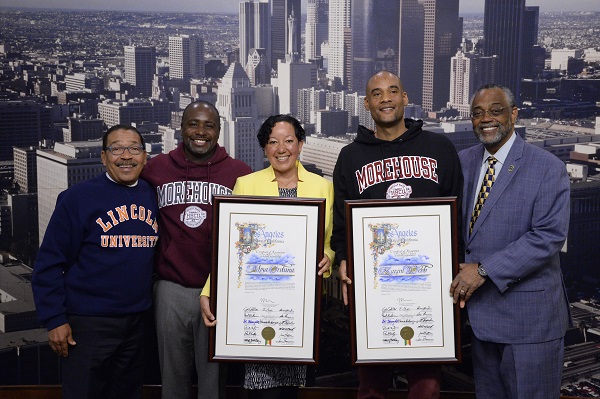 As a part of City Councilmember Marqueece Harris-Dawson’s celebration of African American Heritage month series of public programming, City Hall recognized Historical Black College & Universities (HBCU) Day with a reception and council presentation for HBCU Alumnae Alisa Orduna and Karim Webb. Tuesday, February 13 at 9am, the community was urged to wear their HBCU’s tee and sweat shirts representing their alma mater. A City Hall Proclamation ceremony recognized the work of Xavier University alumna Alisa Orduña who was recently appointed Senior Advisor on Homelessness to coordinate the community’s comprehensive efforts to address homelessness who currently serves as the Director of Homelessness Policy for the Office of Los Angeles Mayor Eric Garcetti, a post she’s held since 2015. Also receiving recognition was Morehouse graduate Karim Webb who holds the current position as Co-Owner and Operations Partner of PCF Restaurant Management, a Los Angeles-based franchisee of Buffalo Wild Wings. “When they ask me why, I say to help people see possibility for themselves and work passionately to create the lives they desire, “ says Karim. “I’m glad to be able to facilitate this via entrepreneurial endeavors …and thankful I live and do business in a city governed by people who believe in our approach.”

Historically Black Colleges and Universities have been under attack as irrelevant in the 21st century by some scholars now that segregation of public and state school was a violation of the 14th amendment and unconstitutional for more that 60 years. There are those in attendance like the Councilman Herb Wesson, a proud graduate of Lincoln University of Lincoln, Pa. who believe attending HBCU’s were vital to their success. “As a proud alum of Lincoln University, Historically Black Colleges and Universities have a special place in my heart,” says Councilman Wesson. “Today we honored two HBCU graduates who have done right by Los Angeles – Alisa Orduna and Karim Webb. We must continue lifting up these institutions and the individuals they empower.”

As more and more African American high school graduates started attending state and city colleges and universities in the 60s, HBCU’s suffered attendance and funding resources. Families had access to Ivy league and aspired for the access and social status it brought to their childrens’ future. However, it was in the 80s and 90s that support for HBCU resurged especially in films like “Boyz n the Hood” and Spike Lee films in addition to “The Cosby Show” and “A Different World.” Today, African-Americans can attend any college and university, but more than four times as many students choose historically black colleges and universities than 40 years ago. “I’m so proud to honor just a few of the LA folks who carry their HBCU pride, dedication, and brilliance into their work,” says Councilmember Marqueece Harris-Dawson. 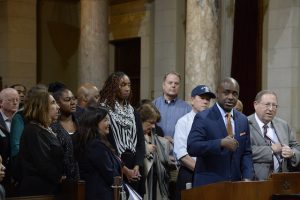