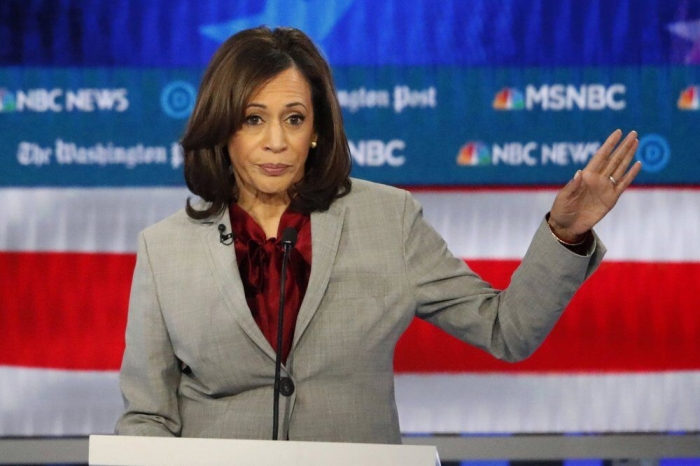 Kamala Harris cloaked her presidential campaign in the promise of becoming the first Black woman in the White House. That wasn’t enough for donors and supporters, including Black voters.

The California senator abruptly withdrew from the race on Tuesday after her once-promising campaign failed to coalesce around a message that would resonate with voters. And without clear support from voters, Harris couldn’t raise the money needed to keep going.

Responsibility for the collapse of a presidential campaign almost always rests with the candidate. But Harris’ exit also demonstrates the unique challenges facing candidates of color in the 2020 campaign. As Democratic voters of all races almost singularly obsess over who is seen as best positioned to defeat President Donald Trump next year, candidates who aren’t white are largely seen as not fitting the bill.

With less than two months before voting begins, those judgments — right or wrong — are becoming fatal as donors watch these cues to decide when to pull back.

“It’s the money, it’s the support, it’s the polls. … It’s an assumption for black candidates that their campaigns are long shots,” said Quentin James, the founder and executive director of CollectivePAC, an organization aimed at building Black political power. “We’re left to wonder why is it that a candidate’s race still impacts how much money they can raise or how much support they get from institutional Democratic donors.”

Of course, Barack Obama, the first Black president, is one of the most successful Democratic fundraisers, still collecting millions of dollars for the party nearly three years after he left the White House. And plenty of white candidates have had money problems this year.

John Hickenlooper, the former governor of Colorado, couldn’t raise enough money for his presidential bid and chose to run for the U.S. Senate instead. Sen. Kirsten Gillibrand of New York is a powerhouse fundraiser in her home state but couldn’t translate that success to her presidential campaign and dropped out in August. Montana Gov. Steve Bullock ended his campaign this week, also bemoaning money trouble.

But other white candidates have had success that women and candidates of color have said isn’t available to them. Harris, for instance, is the highest-ranking black woman in the U.S. government. But the $35.5 million she raised during her campaign falls far short of the $51.5 million that Pete Buttigieg, the 37-year-old White mayor of South Bend, Indiana, has collected.

Other white candidates with big questions about their electability have also hauled in substantial sums of money. Vermont Sen. Bernie Sanders has raised $61 million — more than any of his rivals — despite debate over whether his policies are too liberal. Concerns over the 78-year-old’s candidacy also grew after he had a heart attack in October. He has since returned to active campaigning.

Former Vice President Joe Biden is legendarily gaffe-prone and also faces questions about whether, at 77, he’s too old to manage the demands of the presidency. But he’s raised $37.7 million, topping Harris even though he launched his campaign more than two months after she did.

This is not just about Harris. New Jersey Sen. Cory Booker has struggled to raise money. In September, he pleaded with supporters to donate $1.7 million in 10 days to keep him in the race. On the debate stage last month, he turned his closing statement into another pitch for cash, raising over $500,000 in nine hours. Although he has met the fundraising threshold for this month’s debate, low polling numbers may keep him off the stage for the first time.

“People assume he’s going to be in this all the way because he’s credentialed and such a serious candidate,” said Jenna Lowenstein, Booker’s deputy campaign manager. “We saw it coming, that this was going to narrow this way, that it was going to be because of money. We’ve really been looking for every opportunity when eyeballs are on us to make direct appeals because every time we do it, it works.”

Former Housing and Urban Development Secretary Julián Castro — a Latino whose successful 10-day, $800,000 fundraising push in October brought his campaign back from the brink — may miss the debate stage for the second time in a row.

Neither businessman Andrew Yang, who’s Asian, nor Hawaii Rep. Tulsi Gabbard, who’s American Samoan and Hindu, has yet qualified for this month’s debate, meaning the debate field could be all-white for the first time this cycle.

The rapidly shifting dynamics strongly suggest that a Democratic field that began as the most diverse in history is unlikely to yield a person of color as its nominee. That raises structural questions about how modern campaigns function.

Small-dollar donors tend to be overwhelmingly white, older and well-off with disposable income — in many ways, the opposite of the Democratic Party’s voter base. For someone like Castro, the lone Latino candidate, he’s speaking to supporters who are not part of the traditional donor class, or in a position to support him financially even if they like his message, said campaign manager Maya Rupert.

“Our donors are a part of this campaign in a way that’s probably true of a lot of campaigns, but is also tied to being able to get on the next debate stage and remain viable,” she said. “We very much meant it in October when we said, ‘We don’t see a path forward if we’re not able to raise this amount.’ People have to understand the urgency.”

There have also been challenges with bigger donors. Just last week, Booker super PAC Dream United closed after being unable to raise the money it had hoped to use to buttress his campaign.

The failed effort points to “a lurking fear that a black candidate is less electable,” said Steve Phillips, who launched the effort in December 2018.

“There are many more people of color who are able to contribute more than $2,800,” said Phillips. “We had people who were prepared initially to write seven-figure checks, but who then were reluctant to pull the trigger. It became clear that these fears about electability were larger than we originally anticipated. What you see in the polling numbers among black voters you also see in the giving numbers.”

“There’s a fear,” he continued, “that this would be wasted support because of their fears about whether the rest of the electorate will back a person of color.”