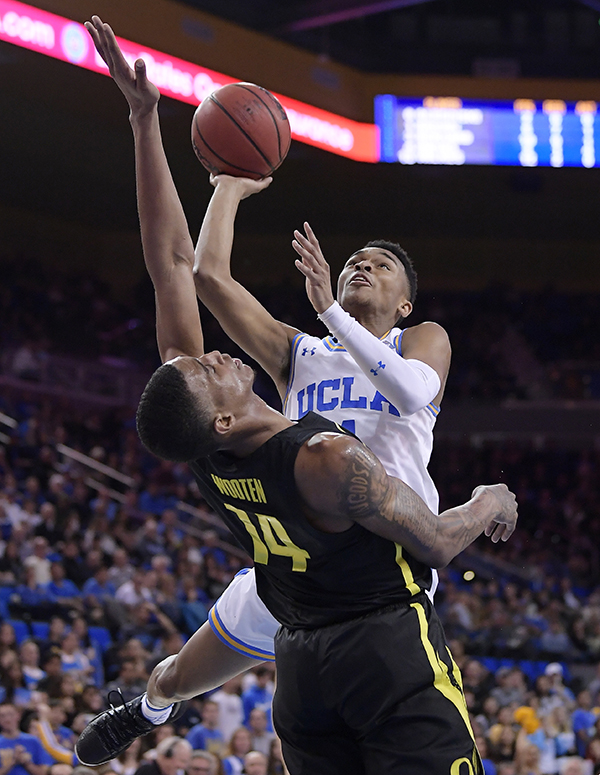 Jaylen Hands was simply unconscionable when they needed him most. Oregon dominated the first 20 minutes of play and held a 16-point advantage, only before Hands began his herculean heroics at Pauley Pavilion.

The UCLA sophomore point guard made eight-of-11 shots in the second half and seven-of-eight three-pointers, helping the Bruins overcome a 19-point deficit, which resulted in UCLA beating the Ducks 90-83 on Saturday night.

“It felt good,” said Hands, who scored all 27 of his points in the second half. “But I’ve got to give credit to my teammates. They we’re setting good screens and pushing the ball after rebounds.”

Jules Bernard had a career-high 20 points and Kris Wilkes added 20 to round out the three Bruin double-figure scorers.

“The crowd was unbelievable tonight,” Bernard said after UCLA had its season’s third-largest crowd of 10,588 in attendance. “I wanna really thank the fans tonight for coming out and supporting us.”

Paul White and Payton Pritchard scored 18 points each, while Kenny Wooten and Victor Bailey Jr. added 16 and 13, respectively for Oregon.

Pritchard made a 3-pointer to start the second half and extended the Ducks largest lead of the game to 19 points, 47-28.

However, that was the final positive for Oregon, as UCLA then began their avalanche of points, outscoring the Ducks 62-39 in the final 20 minutes of play.

“When we went up there, we were down by a lot, we knew to keep fighting,” said Wilkes, referring to the Bruins 87-84 comeback overtime win over the Ducks January.

Hands and Wilkes scored on three consecutive possessions to ignite an 8-0 run to get within 11, still trailing 47-36 with 17:17 remaining. 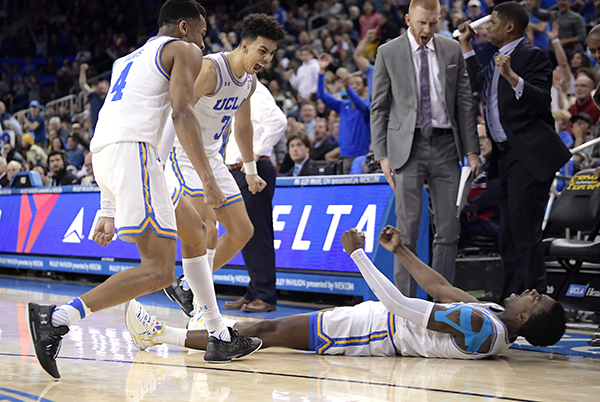 UCLA guard Kris Wilkes, right, celebrates after scoring and drawing a foul, next to Jaylen Hands, left, and Jules Bernard during the second half of an NCAA college basketball game against Oregon on Saturday, Feb. 23, 2019, in Los Angeles. UCLA won 90-83. (AP Photo/Mark J. Terrill)

Three minutes later, Hands completely took over the game and snatched even more momentum away from the Ducks.

“If we can figure out how to tie a ribbon around the second half as we move forward, we’re a good basketball team,” said interim UCLA coach, Murry Bartow. “

With Oregon still hanging around late, Wilkes seemingly put the nail in the coffin, converting a 4-point play, while being fouled by Richardson on a three-point make.

Bernard and Hands scored 14 of the final 22 points in the closing minutes and UCLA went on to top Oregon 90-83.

The Bruins look to close their last regular-season home game at Pauley Pavilion out on a bright note, hosting crosstown rivals in USC (15-13, 8-7 PAC-12), Thursday evening at 6:00 p.m. 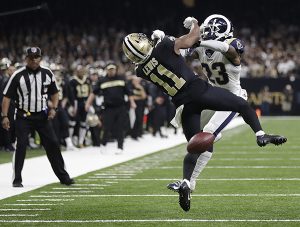 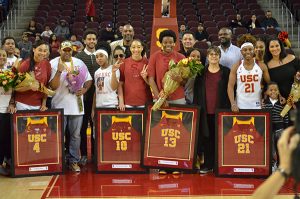 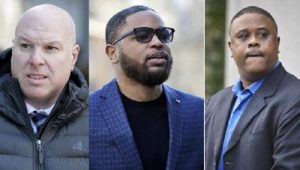 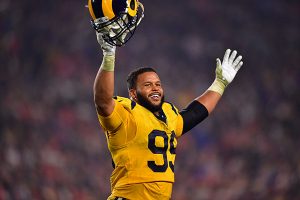