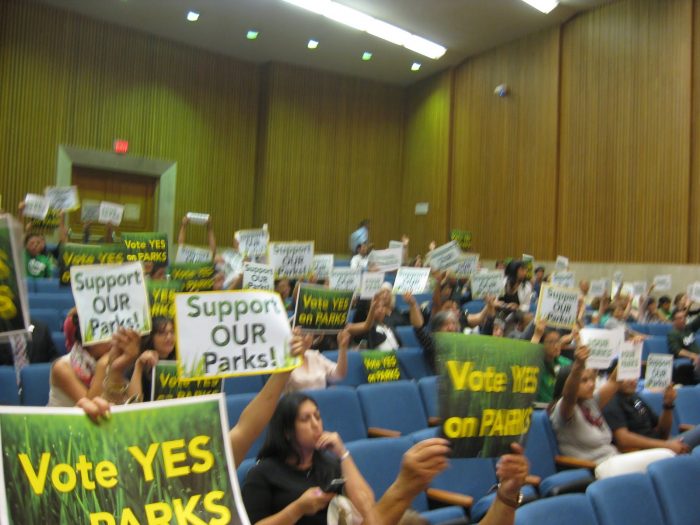 LOS ANGELES – Advocates for a new parks tax proposal that the Los Angeles County Board of Supervisors approved Tuesday for voter consideration are now beginning to prepare a “green-for-all” campaign that will highlight the “need” for more open spaces for low-income communities of color.

The ballot measure, which would generate about $95 million annually for 35 years if it receives a two-thirds vote in November, was approved in the wake of a county government needs assessment based on meetings with thousands of the residents in all of the county’s 88 cities. It concluded that 51% of the county’s residents live more than a half-mile from parks facilities. Many of those residents live in lower income Latino and African-American communities.

Alina Bokde, executive director of the Los Angeles Neighborhood Land Trust, a nonprofit that helps create green spaces in low-income communities, was among the hundreds of advocates who attended the board of supervisors meeting. During the session, 120 park-vote supporters signed up to speak during the public comment period – Bodke among them. She talked about the upcoming campaign for the November vote in an interview after her statement to the board.

“We’re going to get the word out that half the people in our county don’t have decent access to parks,” Bodke said. “We’ll need to educate voters to ensure they are informed about our parks needs.”

Many of the advocates at the board meeting represented organizations affiliated with Our Parks, a coalition of about 60 organizations that support a new tax to maintain, improve and expand the county’s parks and beaches. Tori Kjer, Los Angeles program director for The Trust for Public Land, was among the coalition members at the meeting. She referenced the coalition’s upcoming campaign during an interview.

“We’ll be identifying sources of campaign funding,” she said. “Fundraising will be important because we need to inform voters that this [tax] proposition will be on the ballot and that they need to vote ‘yes.’ There are social emotional, health and environmental benefits that parks bring to communities.”

Val Marquez, who lives in the densely populated community of El Sereno in Los Angeles, was among the county residents who attended the meeting to talk about the benefits of parks. In an interview, Marquez said he was able to “stay out of trouble” during his boyhood in the Los Angeles community of Boyle Heights because he participated in sports at a park.

Marquez, president of Concerned Neighbors of El Sereno, helped that community obtain funds to lease state property to create a one-acre green space called the El Sereno Arroyo Playground in 2012. He said the site cannot be designated as an official park until the land is purchased. If voters approve the parks tax, he said the community hopes to obtain county funding to purchase that land and acquire two additional acres of neighboring state property to expand the park.

The county is proposing a new tax partly because current funding for parks and beaches – funded through a proposition that passed more than 20 years ago – wil expire in 2019. A 2014 parks tax ballot measure fell just short of the two-thirds required for passage. Critics said it failed because it needed more public input and a more comprehensive list of spending projects. The needs assessment for the new proposition identified 18,000 priority projects.

The board of supervisors discussed polls on voter attitudes during the meeting. A June poll commissioned by the county indicates that a new ballot initiative would receive enough of the traditionally pro-parks Latino, African-American and Asian-American votes to generate the two-thirds majority required to pass a new levy. The respondent tally: 79% of Latinos, 75% of African Americans, 65% of Asian/Pacific Islanders and 64% of whites indicated a willingness to vote for a new parks ballot.

The poll report also examined some possible campaign messaging issues. The report said respondents were even more likely to vote for a prospective ballot measure after hearing “educational” statements about the benefits of a plan based on its new needs assessment. For example, those statements boosted Latino and African-American respondent support to 85% and 84% respectively, according to the poll report.

Among the more effective statements are those that associate a proposed new proposition with a plan that will preserve natural resources, protect drinking water and provide resources necessary to meet the park-related security, equipment, playground and social needs of children and seniors, the poll report said.