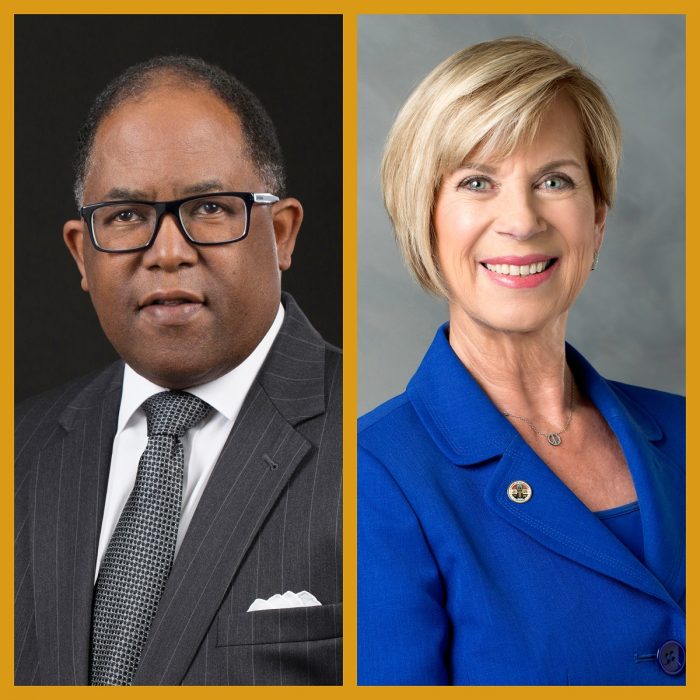 The Greater Los Angeles African American Chamber of Commerce (GLAAACC) will honor Los Angeles County Supervisors Mark Ridley-Thomas and Janice Hahn with an award for public service at the GLAAACC 26th Annual Awards Dinner on Friday, March 8, at the JW Marriott at LA Live in downtown Los Angeles. The awards ceremony pays tribute to individuals, small businesses and corporations who have contributed to the economic growth and development of the African American small business community.

“We are honored to recognize the invaluable contributions of Mark Ridley-Thomas and Janice Hahn with GLAAACC’s Public Service Award,” said GLAAACC Chairman, Gene Hale. “Being elected by a majority of the people to serve in public office comes with great responsibility. These two exemplify what it is to work tirelessly in service of the public good.”

During his almost three decades in public office, Ridley-Thomas has dedicated himself to bringing positive change to the social and economic problems for under-resourced and marginalized Angelenos.

Since his election to the Los Angeles County Board of Supervisors in 2008 and reelections in 2012 and 2016, Ridley-Thomas has continued to be a fierce activist in support of the Second District’s more than two million residents. His work has addressed a broad range of issues, including economic and workforce development, health care, public safety, education, budget accountability, consumer protection and civic participation.

Ridley-Thomas is widely regarded as the foremost advocate of neighborhood participation in government decision-making. By virtue of his founding of the Empowerment Congress, arguably the region’s most successful 27-year experiment in neighborhood-based civic engagement, he is considered the founder of the Neighborhood Council movement.

Janice Hahn inherited a passion for public service from her late father, Supervisor Kenneth Hahn, who held public office in Los Angeles County for fifty years and who left behind an incredible legacy of service. Before being elected to the Board of Supervisors, she served for ten years on the Los Angeles City Council and for five and a half years in Congress.

The native Angeleno earned nationwide recognition for founding the PORTS Caucus and recruited over 100 of her fellow House colleagues to advocate for ports issues and infrastructure. She has been a leader on efforts to rebuild the national freight infrastructure system, level the playing field for small business owners, and reducing gang violence.

Hahn was elected to the Los Angeles County Board of Supervisors in November 2016 to represent the Fourth District and has established herself as a leader in the struggle to end the current homeless crisis, a champion for communities plagued by pollution and health problems, and a dynamic voice on the Metro Board of Directors.

Besides the Public Service award, GLAAACC will present awards in over a dozen other categories including African American Business of the Year, Banking and Financial Institution of the Year, Purchasing Executive, Construction Company of the Year, Small Business Advocate, Public Works Contractor of the Year and Corporation of the Year.

“In addition to recognizing deserving individuals and corporations, there will be great entertainment, valuable contracting information and the networking opportunities are unrivaled.” said GLAAACC Co-Chair Jamarah Hayner. “This is truly the business event of the year and always sells out.”