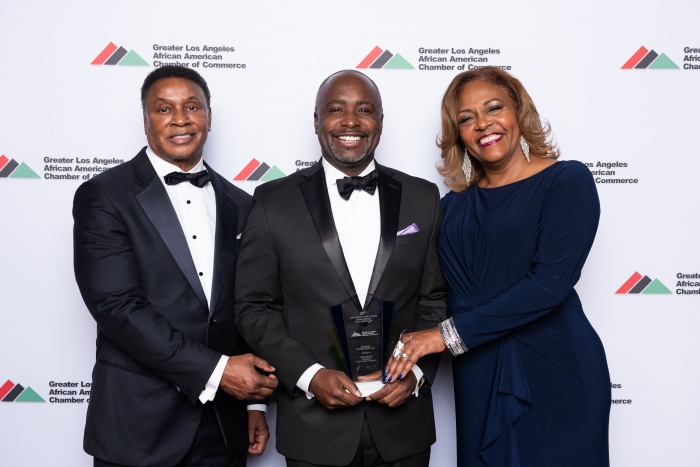 For twenty-seven years the Greater Los Angeles African American Chamber of Commerce (GLAAACC) Annual Economic Awards Dinner has been the premiere event of the African American business community.  The event recognizes individuals, small businesses and corporations who have contributed to the economic growth and development of the African American small business community.  The awards dinner has honored top corporate leaders such as L.A. Metro CEO Phillip Washington and Los Angeles World Airports CEO Deborah Flint, the late Kaiser CEO Bernard Tyson, as well as political leaders at the local, state and federal level.

“GLAAACC’s Annual Economic Awards Dinner is more than an event, it’s an annual opportunity to network and meet face-to-face with top executives from a variety of industries,” said GLAAAC Chairman Gene Hale.  “If business owners only attend one event per year, this is it.”

Since 1994 when Sam Iacobellis, former chief operation officer for Rockwell International and the person responsible for development of the B-1 bomber, chaired the inaugural Economic Awards Dinner in 1994 and Daniel S. Goldin, NASA’s longest tenured administrator was the keynote speaker, the event has continued to grow in stature and prominence.

Over the past two and a half decades, the Economic Awards Dinner has had have many distinguished guests and keynote speakers from a variety of industries such as presidential appointees, elected officials, executives from private and public sectors and sports.

Mistress and masters of ceremonies have greatly contributed to the stature of the GLAAACC’s Economic Awards Dinner.  The legendary defense attorney Johnnie Cochran was the first master of ceremonies.  Actresses Dawn Lewis (“A Different World,” “Hangin’ with Mr. Cooper”), Vivica A. Fox (“Independence Day,” “Soul Food,” “Set it off”), Terri J. Vaughn (“Steve Harvey Show,” “All of Us”), actor and comedian Flex Alexander (“Uptown Comedy Club,” “Girlfriends”), KABC7 Anchor Mark Brown and Los Angeles City Council President Herb Wesson are a few of the professionals that added star power and prestige to the gala while keeping the audience entertained and the evening running smoothly.

Southern California Edison (SCE) is the Diamond Sponsor for the 2020 Economic Awards Dinner.  According to Southern California Edison Supplier Diversity Manager Dennis Thurston, the utility company is one of the largest supporters of African American businesses in the state.  SCE’s diversity has been at 40 percent for disadvantaged business enterprises (DBE) suppliers for the past six years, spending over $2.1 billion with diverse companies in 2018.  Thurston said that SCE was on track to spend the same in 2019.

“Southern California Edison recognizes that African American businesses are an important component in keeping the economy moving forward,” said GLAAACC Co-Chair Jamarah Hayner.  “We are proud to partner with them once again to recognize individuals and corporations that support our businesses.”